Interview: Jake Sheridan on his EMX250 debut and riding Lommel 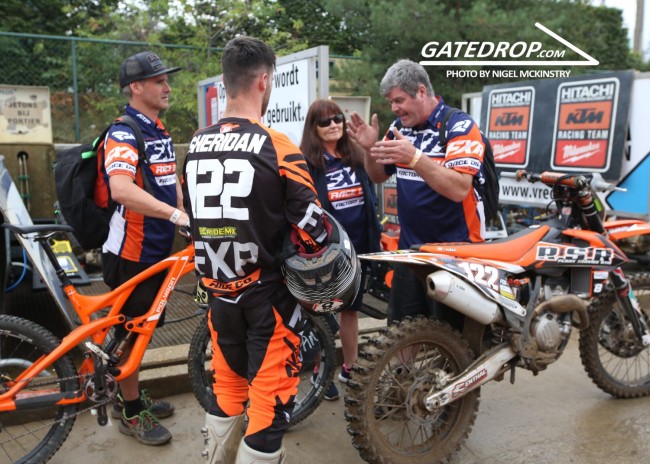 Jake Sheridan travelled to Lommel to contest the EMX250 Championship in what was his first attempted racing the series.

Unfortunately, Sheridan didn’t manage to qualify but he was only 1.3 seconds off – not bad! Lommel is such a tough sand track and there’s no doubt Sheridan would have learnt lots.

We caught up with Sheridan to discuss his experience in the EMX250 series at Lommel.

Gatedrop: Jake you contested your first EMX250 round at Lommel, unfortunately you didn’t qualify but what did you make of the event? How was it to ride on the same weekend as the best riders in the world?

Jake Sheridan: The event was unreal, I was nervous for sure but I enjoyed every bit of it. It definitely was a great feeling to ride the famous Lommel GP with the best riders in the world. At one stage it was a little overwhelming but at the end of the day it’s just another race day.

Gatedrop: Lommel – the track! Was it as brutal as you’ve heard?

Jake Sheridan:  For sure, the track was brutal. I rode it quite early in the day and in my opinion the track was rough as hell. So, I can only imagine what it was like at the end of the day. It really is a man’s track and it will show you up for what you are – there’s no hiding from the rough line.

Gatedrop: This is probably a stupid question, but is there really a track in Ireland that can help prepare you for Lommel?

Jake Sheridan:  My opinion is no, from riding Lommel there is no comparison. Unfortunately, any rider that comes from Ireland that wants to ride world level, they will have to head to Europe to at least simulate what will come on race day with roughness of the tracks. For sure, we have tracks that will learn you how to go around corners but to learn how to go fast on rough terrain it’s a no go.

Gatedrop: You were only 1.3 seconds off qualifying which isn’t too bad for your first attempt. How did you find the two sessions? Did the track change much between free and timed practice?

Jake Sheridan: Yeah, I was quite close. Every rider was fast and there was a massive change in the track from both sessions. Riding sand and the level of riders at the event, the track was changing every lap when there were bikes on it.

Gatedrop: You obviously stayed the full weekend to watch the rest of the GP. How did you find watching the likes of Prado and Geerts jumping and skipping over the big bumps? The track was even rougher for those guys than it was for you!

Jake Sheridan: You can learn lots just by watching those riders. The technique and timing in the sand is unreal and also the commitment. They make it look easy. It was nice to see how fast they can go over rough ground as it is something I will be pushing towards every time.

Gatedrop: Are you planning on doing any rounds of the series next year?

Jake Sheridan: For sure, I’d love to do more rounds of the EMX250 series. I think it will bring me on loads and I wasn’t too far away at my first one so yeah, we have already made plans for next year to be doing some.

Gatedrop: Do you think doing more EMX250 rounds next year is what you need to grow as a rider?

Jake Sheridan: Yeah, definitely. It’s what I need, the level of riders are really high and it’s really intense.  The work that is required to be in the middle of the EMX250 championship and also possibly win – it is going to be a lot but I’m really looking forward to it and I’m excited to what it might bring in the future. All I can do it set my sights on it and work my ass off for it and be honest with myself so I’m looking forward to 2020.