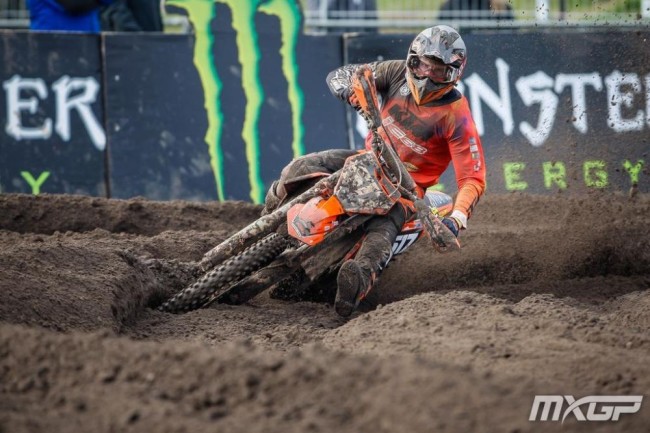 The Swedish rider has a lot of talent and ended up second overall at Valkenswaard which is a great start to the season. Over the years, Gifting has picked up plenty of injuries but he always bounces back to remind everyone of us speed. For 2020, it’s important for Gifting to stay fit for the entire season so he can fulfil his potential.

We caught up with Gifting to discuss the opening round of the EMX250 championship.

Gatedrop: Isak, a great weekend here for you at Valkenswaard finishing second in the EMX250 series, can you talk me through your races?

Gifting: Sure, in the first moto I had a decent start and then I got up to second in the middle of the race. I managed to stay there and my riding felt very good, it was a good race. The second race, it wasn’t that good. I mean I had a very good start but made a mistake and dropped down to fifth. I tried to catch up with the guys ahead of me but then crashed another two times, I ended up ninth. I still ended up on the podium with second overall so it was a decent first round of the series although my riding in the second moto wasn’t that good.

Gatedrop: To get on the podium though, you must be happy with that!

Gifting: For sure, it’s the best finish I’ve ever had and also to start the season like this. It feels very good and I will just keep working to try and have a better weekend next time.

Gatedrop: Over the winter you had Epstein-Barr Virus which meant your preparation coming into the season was far from ideal. Did you really expect to be on the podium this weekend?

Gifting: To be honest, no, not really. I mean I had five weeks where I couldn’t do anything with the Epstein-Barr Virus. For me even to be here racing is even an accomplishment because I could have had it even longer. I feel healthy now, physically now I’m pretty good.

Gatedrop: Some guys get Epstein-Barr Virus and the next full year is a disaster for them, mentally how tough was it for you to get it? To show the speed and fitness you did around Valkenswaard this weekend, you must be happy!

Gifting: The thing is, you need to know you have the Epstein-Barr Virus, some people don’t know they have it, keep working out and everything, then you can’t do anything for four months or something. I managed to only have it for four or five weeks and then I could do a little bit of training. I had contact with doctors and everything. I think if you spot early that you have it and have some luck, it’s not that bad. But if not then it can ruin someones career.

Gatedrop: What was the track like over both days? Even though they flattened it overnight it looked pretty similar for both your races, what was your thoughts on it?

Gifting: Yeah, it was pretty much the same actually. It was soft but still some sections that were hard underneath and some edges and stuff. It was really hard to pick a line because some lines were very soft. When I crashed the first time I picked a soft line and I went over the bars. It was a very hard track but it was the same for everyone.

Gatedrop: Is that the sort of track you enjoy and excel at or was it more a case of survival out there in some sections?

Gifting: The second race was mostly survival out there for me. I went down twice and I didn’t feel I rode that great. I think I’ve a lot to do better but also this was the first race for me this season. I didn’t do any pre-season race so to be able to be up there and to compete with them is really good.

Gatedrop: Did you get any arm pump out there? I know it can be common when riders haven’t raced in a while.

Gifting: Just a little bit. After the crashes I got some adrenaline and arm pump but otherwise it was pretty good.

Gatedrop: You are still a privateer which surprises me, you’ve showed a lot of good results over the years. Has it been a case where you’ve just had no offers or are you waiting for the right offer to come around? The goal must be to secure a good ride for 2021.

Gifting: For sure, you always want a ride but right now I have a good ride even though I’m a privateer. The thing is that I don’t want to pay for just a decent team let’s say, sometimes when you look at other riders who go to teams they end up doing worse. If I want to do something in a team, it must be a really good opportunity, otherwise I will stay with a privateer setup.

Gatedrop: Will you do any MX2 World Championship rounds this year or will you just focus on the EMX250 series?

Gifting: I will probably do some rounds. Maybe in Loket it’s possible.

Gatedrop: That would be good experience for you, would you like to be in MX2 in 2021 or have you no preference?

Gifting: For sure, I want to be in MX2. I mean I have until 2023, I have some years in the MX2 World Championship but that is where I want to be.

Gatedrop: After getting a podium you didn’t expect here at Valkenswaard, what’s your goals for the rest of the season?

Gifting: I hope the results continue like this. Of course, I want to be on the podium every weekend because then I know I will have a good shot of the championship.

Gatedrop: A lot of Swedish guys are only fast in the sand but I feel you’re good in hard pack as well, are you looking forward to the hard pack tracks?