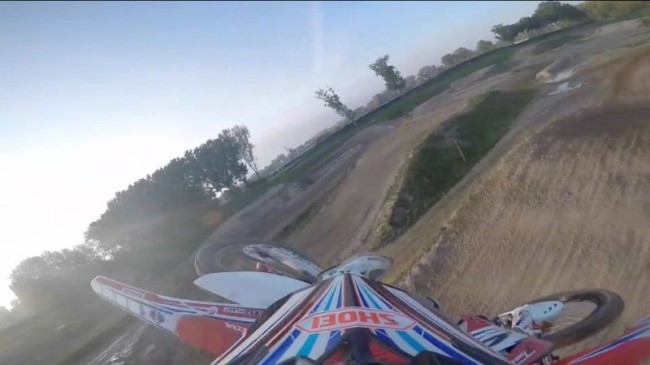 Henry clearly worked hard over the winter and gained a lot of speed and it didn’t take long for him to make a good impression by putting in some fine performances. Henry was riding as a privateer in MX2 as his team (Sarholz KTM) decided not to back him for the World Championship which meant Henry had to get his own way to the GP’s. It is always nice to see a privateer run at the front and the rewards our high when a privateer can impress – Henry now has a full time ride in 2016.

After a good debut season in MX2, Henry has now been signed by JTech Honda and he will now race the entire MX2 World Championship instead of just the European rounds. It is a big chance for the German to prove himself in the class and he could be a top rider.

We caught up with Henry to discuss his career so far as well as his new deal with JTech Honda.

Gatedrop: How did motocross all start for you?

Henry Jacobi: My dad gave me the old bike of Kenny (roczen) in cooperation with kens dad so it all began there.

Gatedrop: Did you find the adjustment to mx2 harder or easier than you expected?

Henry Jacobi: For me it was easier as expected because I gained so much speed over the winter and then I was able to be like 15th place, that was a success for me.

Gatedrop: How hard is it racing as a privateer in mx2?

Henry Jacobi: For me, it was just possible for one year because my dad almost paid for everything except the bike things and clothes. And there is still a lot money left like benzin and all the entrance money of every race so I had 1 year to prove myself for a team.

Gatedrop: I was at assen.. I have to say you rode awesome! It seemed to all click for you..

Henry Jacobi: Ahhhh assen, I don’t know if I still should start to cry or laugh because that second race I was 6th at the start, I passed 3 riders and I was 3rd, for me that was like impossible. It felt like a dream and then I was closing the gap to anstie, I was so fast and also confident so then something felt wrong but I continued in 4th. I was already 10 seconds ahead of 5th but then it turned out to the worst race because the shock of the suspension broke. So I had no suspension on the back of the bike. I needed to ride really slow and that broke my heart because I was so good but at the end it’s racing, I’m young and hope to get in such a position as soon as possible.

Gatedrop: Whenever Hubert Nagl picked you to represent Germany for the first time in Latvia, he had nice things to say about you. Did that give you confidence that you could make it?

Henry Jacobi: Yes it was for me the best race of the year and it’s always special. This year I was really unlucky jumping in the bike of keeno and broke my fingers. But I think normally it gives me confidence and I can do good.

Gatedrop: How did it feel to represent your country at the nations for the first time?

Henry Jacobi: It’s just a race like every single other race. But the atmosphere is special and you can’t explain what it is like in detail.

Gatedrop: Where you happy with how this season went for you?

Henry Jacobi: I was happy I made my goals even with a small injury but at the end all went well and I found a team who wants me to ride for them and it’s a very good team!

Gatedrop: Have you rode on the Honda yet? What’s your first impressions?

Henry Jacobi: It’s awesome I have much more feeling for the corners, now we are going to setup the suspension and all that to improve it.

Gatedrop: You got your first top 10 at your home GP, what was that like? Did you feel extra pressure to get a result?

Henry Jacobi: Not extra pressure but I wanted to do a top ten really bad and I got it, for me it felt like winning.

Gatedrop: What is your plan before the season starts?

Henry Jacobi: I will do 3 Italian championship and the Starcross at Mantova.

Gatedrop: What’s it feel like to get a good ride with a good backed team in mx2? Seeing brylakovs results must give you confidence?

Henry Jacobi: Yes I just have the eyes on my own thing I want to be perfectly trained and want to get the best results as possible. But I am really happy with how the things were going.