Interview: Harri Kullas on Assen MXoN and being away from MXGP 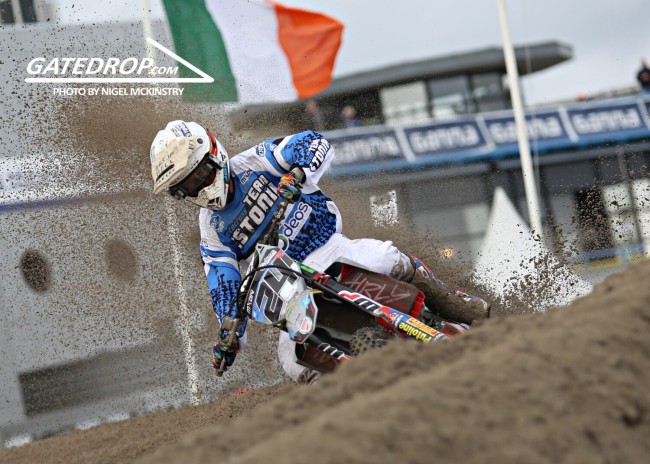 Harri Kullas hasn’t been in the MXGP paddock that much the past few years but he reminded everyone of his talents during the MXoN at Assen.

The Cab Screens Honda rider has been concentrating racing in the UK after signing with the British team but showed he can still perform at a high level in Assen.

We caught up with Kullas after the event.

Gatedrop: Overall, it was a super weekend for Estonia to end up fourth overall. I’m sure it’s a bit frustrating not to be on the podium but being such a small country, I’m sure you can’t complain too much!

Harri Kullas: Of course not. We don’t even think about the podium before the race. With sand and rain, you start to think you never know! Overall, we just tried to get to the A final race, we did that and the key was to have good races. To finish the races with this weather and this track, to enjoy the riding and do our best. We did a little more than that and I’m surprised a little bit.

Myself, that was my best MXoN again, last year was good but this year fourth and twelfth, I got the holeshot in the first race. It was good and overall I ended up fourth (in the open class). The GB guys, they beat us by six points overall, it’s not a lot but it’s still hard to make that up. I think we also got lucky with France DNF’s. I mean we could have been on the podium but then again we are really happy to be fourth. Estonia have never been on the podium so it would be nice to get that one.

Like you said, a small country to be fourth, even with a top ten we are always happy. Eighth or ninth, we’d always be happy with that if the riding has been okay. Today as a team we did a good job as the riders, we all finished six races. The mechanics did a good job because the track was heavy, you had to be smart out there to not destroy the bike, stay off the clutch and pick the good lines. Also, with the sprocket and the chain that you don’t go to deep in the ruts. You had to try and keep the gloves as clean as you can and also the goggles. Overall, it was a good day for the team.

Gatedrop: After qualifying on Saturday, I spoke to you and you said you were actually disappointed with how you rode! I guess you showed why on race day and that you were right to expect more!

Harri Kullas: Yesterday I started well but then I dropped to fourth and then I had 6-7 seconds to Shaun (Simpson). I was keeping him at the same gap for 3-4 laps. My fitness is usually good and I enjoy this kind of condition which it’s rutty and muddy. We had a small problem with the rear break, I knew it was out fault as we didn’t prepare for this race but yeah it’s mechanical. It’s better for it to happen on Saturday than Sunday. I was a bit disappointed because I know I could maybe have finished fourth even if it didn’t matter because I knew top ten was the minimum, I had to do to get us to the A final after the first two races.

I had to be smart but after Shaun, I saw that Australia were really far so in that way I was taking it easy to just finish the race and get to the A final. Even though I was a bit disappointed in the end it didn’t matter. Today showed that I can still be pretty good in the GP’s and especially in the tough conditions. There’s been a lot of talking about the tracks at the GP’s lately and when you see that the tracks are slower now, more ruts and some mud, they’re technical and I enjoy this condition, it suits me. I am able to show my skills more then.

Gatedrop: You’ve been racing the British Championship this year and only done a few GP’s, do you miss racing at this level and do you plan on doing anymore GP’s next year? Also how are you finding the British paddock, I know you have a good team behind you there!

Harri Kullas: Of course, if I had a good GP team, I’ve got a good team now in the British and MX Nationals. I’m really happy and they’re happy with me. That’s why we continue next year with the same deal.

Maybe we will do a couple more GP’s, maybe 3-4 of them. Most sandy ones like Valkenswaard, Lommel and the GP at Matterley Basin.

Gatedrop: There’s not supposed to be a GP at Matterley next year, do you know something we don’t?

Harri Kullas: I think there’s going to be. I don’t know but I just heard some rumours. Maybe it can come back, if there is a GP in Matterley then of course we will race there so 3-4 GP’s is the plan. Overall, it’s a long season for the GP’s, if you have a good team, it’s good. It can be hard to get the money for a salary and it costs quite a lot so that’s why I race in England. It means I can survive and pay my bills so that’s one reason why I race there.

When you get some salary, maybe the bike you get isn’t so good at the GP’s. Like Searle said also this year, he went to Factory Kawasaki and the bike was way different. You need to have a good bike to race at this level. The tracks are fast, there’s square bumps and you need to have good suspension with good power and a good bike. You need a good team that supports you all the time.

In one way I am happy with where I am at the moment in this situation but if I had a really good deal with a good team but there’s not so many left anymore. It means I can’t do it, I’ve done some years some races privately and still good results, top 15 and top 10 even. We will do a couple, I don’t think it’s worth to spend so much money for that, you need a good bike for good results but I’m happy with where I am at right now.