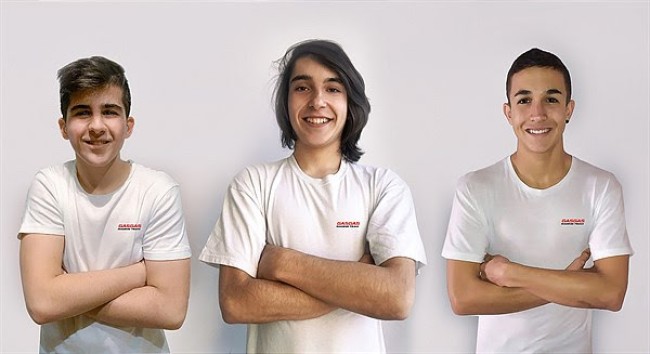 Last year was a great year for Guillem Farres-Plaza contesting the EMX125 series as a rookie. The Spanish talent went into the season as a relatively unknown rider but really impressed and ended up a very solid ninth in the championship.

With lots of the EMX125 riders from last year moving out of the class, Farres should be a front runner in 2020 and has been given the opportunity to race the GasGas in 2020.

Gatedrop: Guillem, let’s start with last year, you came into the EMX125 series as a relatively unknown rider and had a brilliant year finishing ninth in the championship. Going into the season what where your expectations and did you surprise yourself?

Farres: Last year my goal was just to gain experience, it was my first time competing the European championship and actually it went really good. Yes, like in Mantova and Trentino when I had two top 3 finishes I was a little bit surprised.

Gatedrop: Last season what would you say the highlight of your year was?

Farres: I would say that that the highlight of the year was in Trentino in the first moto where I did the holeshot and I finished in 3rd position. It was the second race and after not a really good race in Valkensward, it was good to see myself up there

Gatedrop: This year you will race a GasGas, very exciting! How did you feel when you had this opportunity and have you practiced the bike yet or will you not get to ride it until Matterley Basin?

Farres: I felt surprised, really excited, and so happy to have such a good opportunity with this new project. Yes, I already practiced with the bike and everything works perfect.

Gatedrop: You’ve rode the first two Spanish Championship rounds before the EMX125 series gets underway this weekend. How did they go for you?

Farres: Yes, actually at the first race there wasn’t a 125 class so I raced with the Mx2 boys and the second round was the first race of the 125 Spanish championship, it went really good as I could win both moto’s. I think it’s a good way to start the year, and also it’s nice to see where my speed is, how the bike is working and everything. I think it’s useful information for the European series that is going to be really good.

Gatedrop: Heading into the season, what’s your expectations for 2020? It looks to be pretty wide open!

Farres: I don’t want to have expectations, I just want to go out there and ride like I know and do all I can then I think that results will come.

Gatedrop: After a strong season last year, are you going into the season more confident knowing what to expect from the series now?

Farres: Yes, like I said last year I learnt a lot from this series and I think it’s going to help me a lot this year

Gatedrop: You worked with Damon Graulus last year, how was it working with him?

Farres: Yes, I enjoyed working with Damon, the work of a trainer is not easy. You can be a really good rider but it’s not just that ,it’s how you explain to the rider and everything. I felt like Damon enjoyed also being the trainer, he spent a lot of ours working with me and the other riders from the team and he was so dedicated. Almost all the season I was in Spain studying so he had to send me all the trainings and all the stuff. So I felt Damon enjoyed being the trainer and I enjoyed training with him so this helped me a lot. Also, I spent some time living with him and I loved it.

Gatedrop: Who’s your Motocross hero/idol and why?

Farres: I would say that Ken Roczen because he’s been through hard times but he is still there.

Gatedrop: What tracks are you looking forward to the most on the calendar and why?

Farres: I’m looking forward to the Spanish GP, it’s always good to race in front of your home crowd.