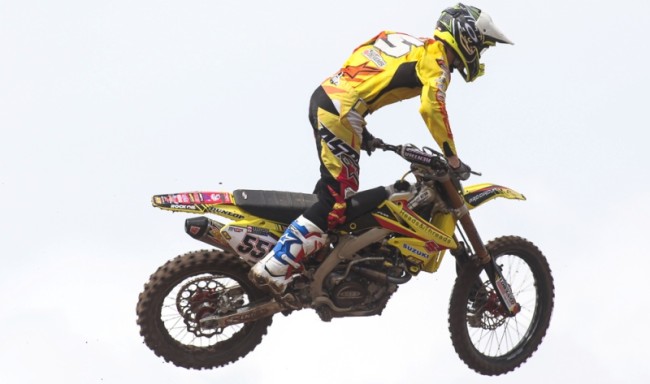 Graeme Irwin had the best year of his career in 2014. His first year on a 450 the 23 year old just missed third place in the British championship by a solitary point on the Heads and All Threads Suzuki and also scored points in both of his MXGP outings during the season.

Irwin started the British championship with a blistering pole position at Landrake against Simpson, Nicholls and Whatley but niggling injuries prevented him getting his first win of the year until the final round of the season at Foxhill.

As a reward for his season Irwin also recently got to race at Sugo for a round of the Japanese national championship to cap a very good year for the Northern Irishman but food poisoning prevented him showing his usual speed out in Japan.

We sat down with Irwin to talk about his season and discovered the determined Ulsterman has his sets sight on going for a British championship title in 2015 but is also desperate to race more GPs with a view to getting a full time ride in the MXGP class.

Gatedrop: How was your trip to Japan to race in Sugo?

Irwin: It was really good. I just rode a standard bike, I had no factory suspension or anything. The only problem was I got food poisoning on Wednesday before I left so I was feeling the side effects of that the whole time. But it was a good time.

Gatedrop: What did you think of the track?

Irwin: The rack really good but I just couldn’t do more than three laps and then I was completely shattered to be honest!

Gatedrop: Did you get speaking to them about doing anymore GPs?

Irwin: Yeah my plan is to do at least three. The problem is I want to do them and do as many as I can but it just costs the team so much money. I have to be careful and pick and choose, the two I will definitely are the Czech Republic and the British GP, the third one I still have to decide.

Gatedrop: How did you find the two GPs you did in Britain and the Czech Republic last year?

Irwin: My starts weren’t the best but I showed some speed, especially in the Czech Republic I was in with the main group. I enjoyed doing them but it hard with the money that it costs.

Gatedrop: Coming in this year with RV and the MX2 riders moving up. It’s going be extremely hard for a guy like yourself to come in for a few rounds and make a name for yourself, but are you excited to race the likes of Villopoto?

Irwin: Oh yeah definitely. There are always riders coming up but what I am more interested to see is how Villopoto is going to fair against Cairoli. I think Cairoli is a great rider and I think he is the man to beat, it will be interesting to see if Villopoto is up to the job and ride Cairoli’s speed on European tracks.  For me it was my dream as a kid to race MXGP and in the last couple of years, in the rounds I have raced, I have got to race riders I never thought I would race against.

Gatedrop: Nathan Watson has got a GP ride now with Husky, he went over to Holland and raced in front of the team there and they saw his potential. You beat him in the British Championship but do you need to race more in Belgium or Holland to show the teams what you can do? Your British championship results don’t seem to get as much recognition.

Irwin: I totally agree, this year I had had a really good speed especially by the end of the year and we were there or thereabouts, I do think I deserve a World Championship ride but there are not a lot of teams out there. Nathan Watson got a perfect opportunity when Rattray got hurt and he got to show what he can do and I rate myself as good a rider as Nathan.

But I am happy racing the British championship and my team are great, they are giving me everything I need to succeed.

Gatedrop: With Steven Frossard and Tanel Leok coming into the British Championship this season plus Simpson and Nicholls back, have you still got your sights set on the British title in 2015?

Irwin: Oh yeah definitely, I don’t race a bike to be a top five rider. I put everything in to win and be successful.  I have got to a certain level but I think I am getting faster every year. I can’t settle down and be happy with my speed. I am still looking for that ride in GPs, and there is only one way to prove it and that is to win races and win championships.