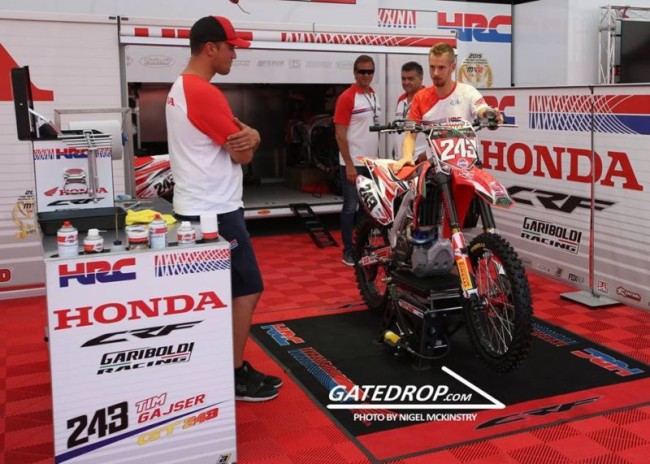 It hasn’t been a bad 12 months for Giacomo Gariboldi, two world titles with the mercurial Tim Gajser has given the hard working team the best rewards they could ever hope for.

After a nervous Assen, Gajser rode with his head in race one at Charlotte to take a steady fourth to clinch the most prestigious motocross championship in the world, he then took it to Tomac in race two only to crash out of the lead. But what is it like being the team boss for an elite rider and going through the emotions of every crash and every victory?

We spoke with a delighted Giacomo to find out.

Gatedrop: You have obviously had great success and plenty of championships. However, what does it feel like to see your rider winning the MXGP World Championship?

Giacomo Gariboldi: Beside the big emotions you feel just the second it happens, it’s the positive feeling that you as a team, have done the perfect job to ensure this happening. 18 GP’s are a long long season and to keep the focus for everybody in the team has been a great achievement.

Gatedrop: At the start of the year did you ever think it was possible for Tim to win the title in his rookie year? Especially winning it in the way he did, only missing the overall podium twice!

Giacomo Gariboldi: After the first pre season race in Sardinia (Italy), we had the feeling he could do something big, he left some of the top MXGP riders including the World Champion, more than a second behind in the time practice and we just changed there our opinion there about what Tim could do in his first season. Of course nobody was flying so high to think about winning in the way he did!

Gatedrop: Were there any nerves at the last couple of rounds as the championship got closer?

Giacomo Gariboldi: For sure, everybody at the end started thinking about the title and I felt in everybody a positive tension.

Gatedrop: Some teams were using AMA fuel at Charlotte, what’s your opinion on it?

Giacomo Gariboldi: I think everybody should be on the same specs considering we are in the World championship and the interests are very big.

Gatedrop: Tim challenged Eli Tomac in the second moto at Charlotte, do you think he can do the same at Glen Helen?

Giacomo Gariboldi: Without the small crash when he was leading, I think Tim wouldn’t have let Tomac getting on him even if he had not the best mental situation after being so tense in the previous moto where he was playing for the title. Glen Helen will be different and maybe Tim wishes to show his real speed to the US riders.

Gatedrop: If you had to compare the series this year compared to last year would you say the level is even higher? There have been less injuries this year!

Giacomo Gariboldi: yes, I think this year Tim and Romain have raised the bar very high with their speed and for the others it was not possible to follow them. With Jeffrey Herlings next year we will see nice battles.

Gatedrop: There has been talk that Tim could move over to the HRC Honda awning alongside Bobryshev, can you confirm this is the case? If so do you still plan on having a 450 rider? Arnaud Tonus is looking a ride!

Giacomo Gariboldi: Tim is confirmed to stay in our team for the next four years and HRC will announce their plans at the end of the season.

Gatedrop: Your team has always focused more on the MX2 class but the team are without a top 250 rider at the moment, will that change for 2017?

Giacomo Gariboldi: At the moment, in the short term, we don’t have a plan to focus again on the 250 class even if this has been my personal love since the beginning.

Gatedrop: How frustrating has it been that David Herbreteau and Jorge Zaragoza both got injured and couldn’t show their full potential in MX2?

Giacomo Gariboldi: It was really frustrating because we had a very good CRF250R this year, David was improving all the time and could also score two holeshots in Spain before he got injured. I’m sure David could have been a regular top 8/10 guy this season to improve again for 2017.

Gatedrop: Can you confirm if David Herbreteau and/or Jorge Zaragoza will stay with the team for 2017 or is it still up in the air? Giacomo Gariboldi: Unfortunately, without a definite plan for the MX2 class so far from the HRC side we couldn’t retain DH while Zaragoza was at the end of his contract.
Interview: Andy McKinstry