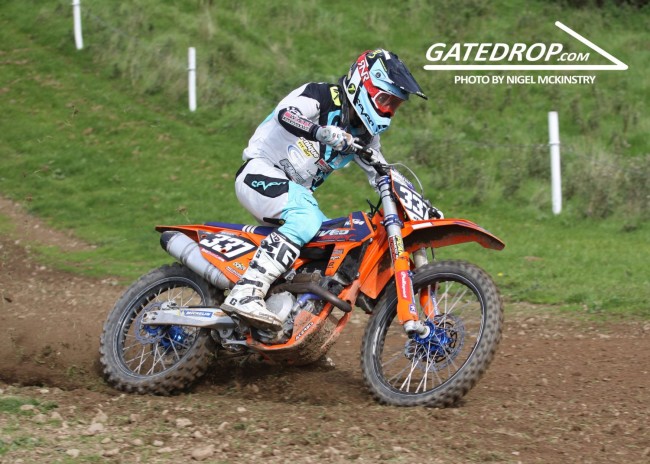 Geoff Walker has plenty of experience behind him and at the moment his focus is on the SR75 Suzuki team.

For the past few years they’ve focused on the Arenacross UK series with Thomas Ramette and Cyrille Coulon but have a new rider line up for the series in 2019.

Valentin Teillet and Charles Lefrançois are with the team for this year’s Arenacross Tour.

We sat down with Geoff after the first two rounds of the Arenacross UK series to get his thoughts on the series and much more.

Gatedrop: Geoff, we’ve had the first two rounds of the Arenacross UK series now here in Belfast. Overall, how would you describe the weekend for the team?

Geoff Walker: It’s been a bit of a tough run to be fair but we’ve been doing this long enough to know it always won’t go smooth. Bringing Valentin (Teillet) in at the last minute, he’s a great great rider and racer. We’ve worked so hard to get him comfortable with the bike and the Suzuki, we got it to work better and better every time he went to the track just as a personalisation for him. We were a little bit behind the ball coming in and that showed a little bit yesterday (Friday), but we worked hard to bring it back, we couldn’t be happier with his performance today (Saturday).

The same with Charles, he’s so comfortable on the bike and everything is working perfectly. A lot of it is down to the starts and tonight (Saturday) it didn’t work out for him. Last night (Friday) we won’t really go into because it was a fairly steady second place in the bag and that didn’t work out. We will crack on with it and keep enjoying ourselves and push for what we like to do.

Gatedrop: You mentioned it was a late call to bring Teillet in, just what was the deal with that because Richier was initially announced but then it was Teillet and there was no real explanation regarding Richier..

Geoff Walker: Yeah, it wasn’t a stressful situation or anything like that, it was just some contract stuff with crossovers with some sponsors. It’s just what happens in this game sometimes. It would have been cool to have Flo here, he’s a good guy. Valentin has been on my radar for the pro lites race so as it turned out, it worked out absolutely perfectly and it couldn’t have worked out better.

Gatedrop: The past few years the team have been working with Ramette and Coulon, in a way is it nice to work with two new riders?

Geoff Walker: Yeah, there’s a buzz. Thomas and Cyrille will always be part of the family and especially with what we do here at Arenacross. They’re supporters of the team and we are messaging all the time so that’s really cool. We all still work together, it’s a professional family and we love representing all our sponsors. We’re working with the best guys so it’s going good.

Gatedrop: I have to ask! During the final on Friday, it was looking like a great result for Lefrançois but then he got taken out.  For a team manager it must be very frustrating for that to happen and a good result to go up in smoke!

Geoff Walker: We’ve been doing this long enough so that’s pretty much that.

Gatedrop: You seem to have a real passion for Arenacross, just what is it about AX you love so much and would you ever consider maybe running a British motocross team in the future?

Geoff Walker: To be fair, we are always working to improve. We don’t stride above our means, we have a tight ship to run. We aim to do as good as we can in what we do and representing anyone that comes on-board with us in a professional manner. We can’t spread ourselves too thin but we’ve had some fun developing the team side of things in Motocross and the British Championship and some stuff. That’s a less pressure situation but we can turn our hand to anything. The Weston Beach race stuff, the Motocross stuff, I’ve worked personally in more of those rounds. The team at SR75 is all about having a good adventure and doing cool stuff, entertaining people and that’s my passion for Arenacross and Supercross globally. We love to entertain and make our lovely race bikes go as well as they can, it’s a nice vibe to have.

Gatedrop: There’s been a radical format to the Arenacross UK series this year. What’s your thoughts on the changes and do you think it’s better for the series?

Geoff Walker: I think on a top, pro level with the level of guys racing in the main event that there’s a lot of good quality skill going on. That will filter through to the fans because they’re watching the best of the best each time. When it’s a main every time and no heat races, I like that kind of thing so the guys are pushing every lap. It means they aren’t relaxing and have to push for the results all the time and for points so I think it gives a great buzz of every lap and every second of every lap. That is very very important.