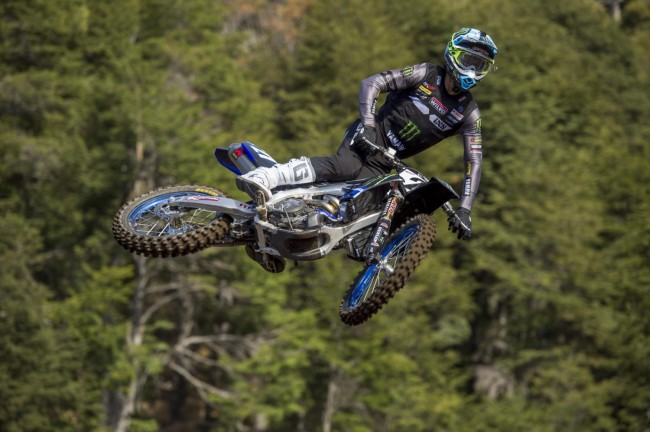 The always smooth Gautier Paulin had a strong season in his first year with Wilvo Yamaha, taking fourth place in the world championship and appeared to gel quickly again with the blue machine after a number of years away from the manufacturer.

Despite losing third at the final round of the year, it was another very good campaign for the Frenchman who is never far away from challenging for the podium in the toughest motorcycle series in the world.

Now with a year behind him in the team, Paulin is hoping for even more next year with factory backing and the very focused, dedicated and professional rider knows that preparation and hard work is the key to improvement.

You had a new team, new bike for this season and you started off the season really strong but just lost third place in the world championship at the final round, what were your thoughts on the season overall?

Very happy with the team, the Monster Energy Wilvo Yamaha, the team is three years old and we have had a long road and hard work has paid off. I really started the season strong but then I wasn’t as strong as I wanted to end up. I lost the third place in the championship and finished fourth in the championship, nothing to be ashamed of, we will work harder next year.

The team will improve by getting factory equipment so we are on the way. The first year is always tough working with new people and make our way to the top – we are in the world championship. I’m happy with the crew, it’s probably the best I’ve been in so far, I’m loving it every day I’m on my motorcycle.

The team are doing every thing they can. This is the MXGP class, the world championship with the toughest guys in the world. If you finish fourth you finish fourth, if you win you win, motocross is more accessible than F1 but how long has Ferrari been working to win in F1 again? They put millions in, everybody works so hard. Yamaha and Monster will do their best and I will do my best.

You have a very smooth and technical style, it is always fun to watch you ride a bike but does that mean you are fussier with set-up because you have so much feel for a bike – or are you fairly easy with set-up?

I know what I want so I know where I want to be and what the goals are. So I’m working my ass off to make it happen, I’m pretty sensible on the bike set-up, I don’t asked for strange stuff. We are on the spec engine but it’s stronger because I like to ride on the torque, and the suspension, I don’t have a stiff fork like the US style. I know what I want with the brakes and everything and I work with the team always behind me for it. A few journalists have been trying my bike and most of them love it, I’m not going in such a strange direction.

The level is really high in MXGP, Herlings, Cairoli and Desalle will be back, you have a lot of talent but what is the extra bit you feel you need to get back up there consistently next season?

The big names are always there since over ten years so this is just the journalists and the passion side. In motocross or sport in general, when you think you are there you are not there any more. Every single lap you need to keep pushing, it won’t be just the first race or the last race, it will be every single second of our sport that we need to keep pushing, that’s being a professional sportsman.

Does it help to have a teammate you get on with well to help push and drive each other?

Yes definitely, it was the dream team, we have been working good together. It’s nice in our sport to have that. We are doing a good job and you can see it in the results. I’m here to race and so is Arnaud (Tonus), it was a successful year. It has been great.

Looking from the outside, the class looks very deep if looks you start in 5th or 15th it’s a battle every lap, is it difficult to keep that concentration during both motos with that intensity and people around you?

No, it’s fun. It’s a lot of fun battling with those guys. You mention the names but it is always the same names, who else is coming? Prado? He will be strong but there are so many other strong guys. You need to be there, stay strong, have a good bike, you need a bit of luck and a lot of hard work.