Interview: Gary Gibson on his opportunity to represent Ireland at RedBud 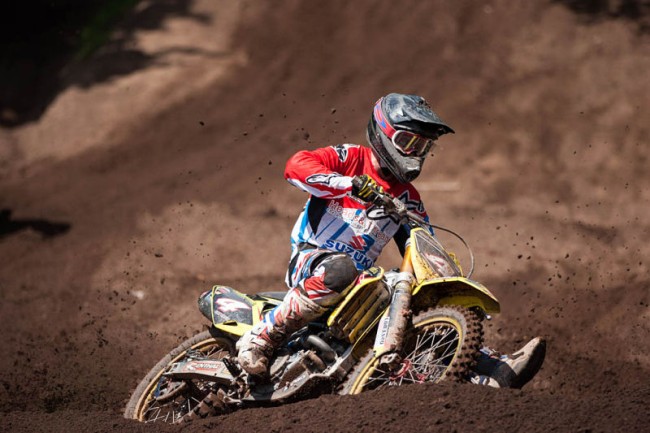 Unfortunately during the last round of the MXGP World Championship which took place at Imola, Graeme Irwin picked up an injury and has been sadly ruled out of the Motocross Des Nations for team Ireland.

As a result of Irwin’s injury, Gary Gibson has been drafted in to race the MXGP class this weekend at RedBud for team Ireland. The other news is that Gibson will also race Irwin’s MXGP bike – a Hitachi KTM UK machine.

This won’t be the first time Gibson represents his country as he also rode the Des Nations in Germany back in 2013 for the first time so he’ll know what to expect from the event as a result.

We caught up with Gibson to discuss his opportunity to represent Ireland for the second time in his career.

Gatedrop: Obviously, it’s not the ideal way to get to race the Motocross Des Nations with Irwin being ruled out with injury but nonetheless you’re getting on that plane for RedBud. How’s it feel to get the opportunity to represent your country once again at such a big event?

Gary Gibson: Yeah, it’s obviously not the way I wanted to be picked for the team. I am absolutely gutted for Graeme because he’s a close friend of mine and we grew up racing together for years and I know how it feels to have the spot in the team. At the same time for me, my dad and the family, I am absolutely pumped to get going. I just can’t wait, it’s just getting everything put in place now because everything is last minute. We will pull together and really put an effort in to make it happen so I’m pumped.

Gatedrop: You’re living and working in England now as well as racing over there at the AMCA as well as the IMBA. Just on your season there, have you been happy with how everything is going over there for you?

Gary Gibson: To be honest, yeah. I have a pretty good thing going at the minute. I’m with a really good team and we work together quite well. It fits well with living and working in England, that’s why I made the shift there. It’s been a bit of an up and down season, I didn’t really get the result I wanted – that was to win.

We had some small issues throughout the year with myself and a few things with the bike but at the end of the season it all came together. We hit the nail on the head at the last round with three wins to walk away with it. I got third in the championship so we ended on a high. But to get picked for this event, I’ve forgot about the two championships thinking about the Nations now!

Gatedrop: You haven’t rode an Irish or Ulster Championship in quite a while now. How would you say your level of riding is like now compared to when you left?

Gatedrop: If you knew you were going to race the Motocross Des Nations this year, would you have maybe rode a few rounds of the Maxxis British Championship to help you prepare for the event?

Gary Gibson: Well, when the team came out I had a chat with Philip McCullough about this.  He said to come home and show your face, maybe that would have swayed a few minds on the committee and himself. To show my face and show everyone else in Ireland where I’m at. I’m not sure the AMCA and the IMBA are as recognised as the MX Nationals and the Maxxis is so maybe that let me down a little bit. It’s on the cards to come home next year to do a few and try to get on the team at the end of the year.

Gatedrop: You rode the Motocross Des Nations for Ireland in Germany back in 2013. As you’ve done the event before, you should know what to expect and maybe you won’t be as nervous this time around! Also, when you think back to Germany what was the highlight from that event?

Gary Gibson: Even the buildup, getting everything sorted and getting out there. Obviously we are going as a team and going out there will bring us all together. I haven’t had that in a while and it will be nice to catch up with Richard (Bird), Martin (Barr), Philip (McCullough) and the rest of the guys who help, sponsor and support the team. It’s going to be nice to have a chat and catch up with everyone. That alone is enough to be looking forward to the event never mind the racing.

Obviously the racing is just another level all together. When you’re coming around, the air-horns and the Irish flags stick out from the crowd massively.  I wouldn’t say its nerves but the excitement is going to be on another level for this event.

Gatedrop: You must be excited to go and race at RedBud. Have you ever been to America before or will this be your first time even going there?

Gary Gibson: No, I’ve never been to RedBud but I’ve been to America twice before for a couple of motocross holidays. I went with my Dad once and then once with a bunch of lads. We got to see most of the tracks so I have got a bit of a feel for the lifestyle out there so it should help take the edge of going out there knowing what to expect.

Gatedrop: With Irwin, Barr and Edmonds we might have been knocking on the door for a top ten result. However, with two injuries hitting the team do you think we will just be happy to qualify? Also, as an individual what’s your expectations for the event?

Gary Gibson: Well, as a team the main goal is qualifying, to get past that hurdle first. Like you know, Ireland are famous for winning the B-Final. All three of us are going to give it our all so it doesn’t really matter. We have three good riders going there, getting into the main event is the main target and then who knows what could happen.

Racing is racing and anything could happen. One of us could have a good qualifying and we might not even need to go to the B-Final. We might get a good gate pick for the second day and then if all of us get good starts then we can always put in a good result.

Gatedrop: It’s just been announced you will race a Hitachi KTM UK for the event. You must be pleased at having that opportunity?

Gary Gibson: I’d just like to first of all thank my team, Mike Dunham has went to all ends contacting America Kawasaki trying to get something sorted. It’s just so much late notice, he even tried to buy a bike out there for me just for the event. It’s a matter of days before the event and Philip McCullough, the team manager doesn’t have the time now to put such thing in place.

I made a decision myself, we made an effort to try and get a Kawasaki because that’s my bike but I’m not going to miss the event and let my country down if I thought not changing machinery was going to do that. Thanks very much to Roger Magee and the ASA Scaffolding for giving me the opportunity of having Graeme’s bike. I’d also like to thank Graeme too because I’m pretty sure he pushed for me to let me have this chance as well. I’d just like to thank everybody involved in making it all happen at such late notice.

Gatedrop: Do you know when you’ll ride the bike for the first time? Will you get a day in the US before the event or will you have to wait for free practice at the Nations?

Gary Gibson: We are trying our best to try and ride it on Thursday. I am not sure though, our flight is lunch time on Wednesday I think. Depending on what way the hours work to and from we are definitely going to try and get a day on the bike first but I’ve been through in the deep end before so it should be alright.

Graeme has had a full year setting the bike up so I don’t think I’ll need to touch much to be honest. We are the same weight but I might need to soften it up if anything because he’s a little bit faster (laughs).

Gary Gibson: I’ve literally just finished my own season. But I am in talks with Mike Bud for next year and I am happy with how things went with the team this year. I’d be surprised if other team offers come along but I am still open for talks.