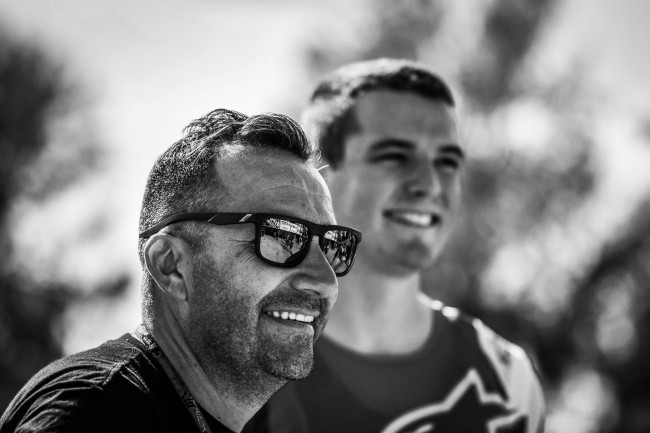 Former rider, Eric Sorby is back in the MXGP paddock as he’s landed a job with the 114 Motorsports Honda team. This year, Sorby worked with Mitch Evans and the pair worked really well together. Coming from Australia, Evans got a podium on his MX2 World Championship debut and things were going well until a few too many crashes lead to injury.

Despite Evans signing with the HRC Honda team to contest MXGP in 2020, Sorby will still work with the Aussie.

With the Honda 114 Motorsports team also signing up fellow Aussie’s, Bailey Malkiewicz and Nathan Crawford, it means Sorby will work with all three of them during the 2020 season.

We caught up with Sorby to get his thoughts on the team and much more.

Gatedrop: Eric, for the people that aren’t aware, can you tell me about your role with the Honda 114 Motorsport team?

Sorby: For the team 114 I am the rider coach and we also have someone taking care of a physique program such as the gym, workouts, bicycle rides etc.

Gatedrop: You worked with Mitch Evans this year, how was he to work with?

Sorby: Working for Mitch was a pleasure. He’s such a nice kid and has so much talent – I will stick with him again for 2020. I will have him less time with him during the week but on the weekend I will be with him like this year. I know him really well and we are the perfect match on and off the track.

Gatedrop: For an MX2 rookie, Evans showed some really great speed. Did you expect that from him and where you happy with his results/speed?

Sorby: I knew he was going to do great, I wasn’t surprised about his results at all. He’s a bad ass rider and of course I was happy.

Gatedrop: At the mid season mark things started to get a little bit difficult with quite a lot of crashes and then injury end his season. What would you put the crashes down too?

Sorby: Mitch got hurt early in the season with a knee infection and he was on the couch for 3 weeks straight after Argentina and it got worse during the season. We tried everything to get back on top like we did in Portugal and he had some more crashes after that. But it’s motocross, there’s nothing you can do about it. We learned and will work harder for 2020.

Gatedrop: Mitch goes to HRC Honda to contest the MXGP class in 2020. What’s your thoughts on that? Perhaps he could have battled for the MX2 World title in 2020!

Sorby: Mitch could have stayed in MX2 and battled for the championship but in his mind even before he came here to Europe, his goal was MXGP and I respect his decision!

Gatedrop: How was it working with Zach Pichon, obviously he has his dad in his corner so perhaps that might have been difficult for you?

Gatedrop: For 2020, 114 Motorsports Honda have signed Bailey Malkiewicz and Nathan Crawford, it’s only been a few days I believe but so far how has it been working with them?

Sorby: With Bailey and Crawf, it’s been really good so far, there’s so much talent and both have a different style of riding but they also have a really good speed.  I am full time Aussie trainer now (laughs). Between them and Mitch I am going to have a good year!

Gatedrop: What are your expectations for the pair of them in 2020?

Sorby: The expectations are high of course. I have decided to do a full GP season and travel around the world so I want results for sure. Top 5 to 8 at the beginning of the season and then to be on the podium, Sorby will be a happy coach then.

Gatedrop: What’s the MXGP paddock like compared to now from when you raced? I guess technology has improved a lot..

Sorby: The GP paddock has changed a lot and it’s almost like Moto GP now. Luongo has done a bad ass job during the past 10 years or more and honestly thanks to him for that.

Gatedrop: How would you say the level is in the MXGP and MX2 World Championships are now compared to the past? MXGP looks like a special class for 2020.

Sorby: It’s hard compare before to now. Everything is different but before we used to have so many bad ass riders and now is the same.

Sorby: I want to say something to Livia (Lancelot) to have that believe in me and giving me this huge opportunity to be work for 114, thanks for the trust and also the man behind this is Giacomo (Gariboldi) who also believes in me to let me have Mitch.  Also for the HRC, people don’t think I’m serious but they forget I worked for the best rider ever Bubba stewart for 3 years, I also helped Barcia and I learned a lot. Now I have a family also and that has helped me become a better person. Cheers and see you soon at the track!