Interview: Edward Allingham on his time racing in America 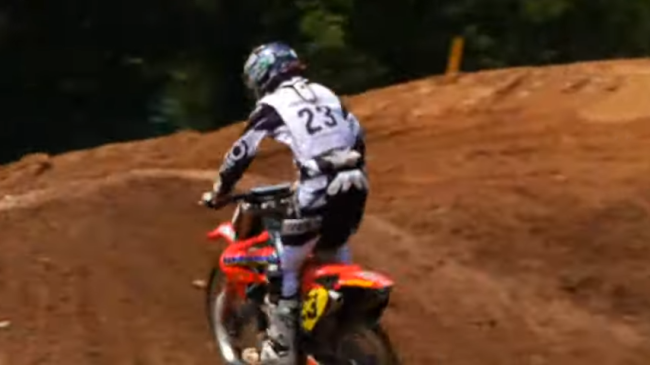 After a promising youth career in England and clinching the MXY2 British Championship, Edward Allingham had the opportunity to go and race in America and had a great experience.

“I was a front runner in the 85cc class at home but for England I still wasn’t good enough and knew we had to up the level. I was at a Supercross in England and my dad knew Mike Craig (Christian’s dad) and they had a chat about me going back to America with them. I went on my own at 14 for three months and I have to say it was a steep learning curve for me, Mike was one of the best trainers I have seen to this day and he really made me excel. The only reason we made this decision was that we knew I had to do something different to bring me to the front and where else to do it but with the fastest 85 riders in the world”, Allingham told GateDrop.com.

Allingham represented Ireland well in America and was very competitive, in the Loretta Lynns Amateur Championship, Allingham finished second in the 250 Stock B class – losing out to Michael Leib.

“Well that year I actually raced the entire amateur series in the US in the B class which was then the fastest group with guys like Tomac, Savatgy, Nelson etc. I went to America that year as the fastest 250 youth rider from England as I won the MXY2 and should have beat Elderfield in the BYMX also only I had a couple of bike failures. I remember I turned up at Lake Whitney and got absolutely smoked, It was a disaster! Guys were taken me out, running me wide and just generally walking over me on track. I actually remember I got taken out, got up and got taken out again in the next corner in the first race”.

Allingham then knew something had to change and looked at his riding style to become more aggressive.

“From that I knew I had to change everything about me or I wasn’t going to last out there. I had to change my whole riding style to be seriously aggressive, ride out of my control at times to be able to run that pace and after a year of just breaking top 15’s to top 10’s I progressed to be able to turn up at Loretta’s on the pace. I turned up there and it was like something we never seen before the place was thousands of acre’s and the motor-homes were parked miles away from the track as there was that many riders there you needed a golf cart to travel through her lanes get to the track. The temperature and humidity was unreal and I remember my dad and James Mac Ferran (who was there all year with me) would take the bike to the line and I would sit in the motor-home with Gail in the AC until the last minute and then jump on the cart and get straight onto the bike at the last minute before the gate dropped. I was fast there and should of won that event I missed it by one point to Leib but that was my fault as I crashed stupidly in two of the races”, Allingham added.

On the level, Allingham says it was incredibly fast and he learnt a lot during his time in America.

“Well, they are the fastest kids in the world and they still are. Ken Roczen went there the year before and finished 9th and 10th overall which kind of shows you how fast the kids where at that time compared to Europe. Things change then though when the majority of them turn professional as the amount of riding they do and the amount of pressure they are under, they just can’t take it anymore and a lot of them disappear and stop riding. Now there are still a lot of riders I raced with racing – Tomac, Leib, Craig, Savatgy, Barcia, M.Stewart etc, I raced all them guys”.

For the year after, Allingham had offers to stay in America to race the Amateurs for another year. The offers were from Geico Honda and the Kawasaki amateur programme.  The Irish rider ended up making the decision to sign with Steve Dixon’s Cosworth Yamaha team to contest the MX2 World Championship – looking back he says it was the wrong decision.

“At that stage after Loretta’s I did yes (have an offer from Geico Honda), it was for another year in the amateurs as I only really turned on the pace in the last quarter of the year before Loretta’s. We were talking to the amateur Kawasaki programme also. I know now it was the wrong decision for me but I guess it was to be back closer to friends and family”, Allingham concluded.

What could have been if Allingham did end up staying in America? However, he’d have needed to adapt to AMA Supercross to really excel there so that would have been another challenge in itself.