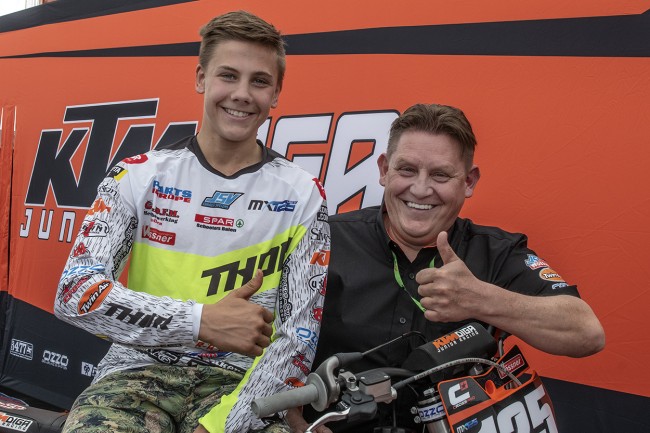 The KTM Diga Junior Racing team of Dirk Saelen has participated in every GP class and made the podium in MX2. Unquestionably their switch, by many regarded as a step back, to the EMX series in 2013 raised eyebrows at first. Yet, five years later the Belgian structure has morphed into one of Europe’s most professional development teams. We caught up with Saelen to discuss the current state of the EMX scene and what is next for his team.

Saelen’s outfit surged into 2018 on the crest of hope and confidence. Miro Sihvonen had made it clear early on in 2017 that he had what it takes to fight for the EMX250 title. Fellow Finn Emil Weckman made a lot of headway in the off-season and the double EMX150 champion just might be the underdog to shake up the EMX125 establishment. With one round left in the EMX125 and EMX250 series, the champion in the latter, Mathys Boisramé was crowned in Bulgaria while EMX125 series leader Thibault Benistant is ever so close to take the crown at the final round in Assen.

What’s your take on this season for KTM Diga Junior Racing?
Dirk Saelen: “It’s been a reasonably successful campaign. On the one hand we had bad luck with EMX250 rider Damian Kojs who suffered a severe knee injury, Miro Sihvonen never got back to full fitness really this year. Which was a great shame for him and for us because the potential was definitely there. On the other hand, we saw Emil Weckman making huge progress. He went from being a top-15 guy to being a front runner, winning a race and placing third in the series until his injury in Lommel. Still Emil captured the Dutch Masters of Motocross 125cc crown so that was positive. Avrie Berry did well in the WMX Championship. She too made a huge leap forward and is now close to the top-10. We think that Avrie still has a lot of room to go forward. James Scott improved too, he made the top-10 the second moto in Lommel, which is a very solid performance considering where he cam from. And James of course finished 7th in the Junior World Championship in Australia.”

Behind the scenes the team kept on building this year,  even literally!
Saelen: “True! We moved into a brand new 600 square metre workshop in Balen before the season and we continued to invest in our staff. With Kees van der Ven, we have a world class mentor in terms of riding and coaching. Kees has developed many top riders and has a wealth of experience. Yente Dourte came on board as a physical coach, combining a scientific approach with the practical knowledge of being a motocross rider himself. With everything that we do we look at the bigger picture to manage all elements in the development of a young rider in the best possible way. This why I’m really pleased that we already started working with Emil Jonrüp now. He’s going to benefit a lot from the extra time that allows us to build momentum for 2019!”

Things can change quickly, how do you rate the level in EMX125 and EMX250 this year?
Saelen: “The level is increasing year after year really. There’s a high number of entries for both classes in most races and the depth of the class is really impressive. Like they say, the cream rises to the top. It’s exciting to see those young talents popping up and making their way through the ranks. The French ‘production line’ had slowed down in the MX2 class but there’s new blood on the way up and you see the same in Scandinavia with some interesting prospects.”

This has been your sixth year in the EMX classes, have you noticed the increasing professionality of the teams throughout this time?
Saelen: “Sure, also because the Japanese manufacturers have become more involved through their official teams in the series. I think everyone is now more aware than ever of the need to establish “their pyramid” and to develop rider talent. We’re not only talking about providing young riders with the right technical tools but also about developing riding skills, racecraft, learning how to train your body and mind, how to eat and rest and so on. There’s an elite  group of EMX teams that do a great job at this. Development takes a lot of time and focus and we believe that this is impossible from a distance. With our approch riders really create the foundation for their career by honing the skills I mentioned before, they learn to race in the sand here in Belgium and increase their fitness.”

With all of the above in mind you guys seem to be moving more to a stable long term composition of the team with riders that can grow together with you.
Saelen: “Exactly, that’s why we put in a place a long term agreement for both Emil Weckman and Emil Jönrup. We can gradually work towards our goals and make that transition from 125 to EMX250 and why not even MX2 GPs. This framework is better understood now so we’re currently negotiationg with a couple of high-calibre youngsters who’d like to become part of our programme too. With that comes an inspiring group dynamic, that’s an incredible bonus people start to understand better now. Many people see motocross as a purely individual sport but I don’t think that’s the case. Training together keeps you sharp and motivated, you can learn from role models, it’s about building this culture of excellence from within.”

If you have all of the infrastracture, the experience and the staff it most be tempting to move up to GP racing again.
Saelen: “Let’s put it this way, It’s an option that we’d like to provide if that’s what makes the most sense for our riders. If a rider leaves our “development environment” to join a GP team there can be a big culture shock. Depending on the age of the rider, and if they’re ready to move up we can guide them for one more year before they find a new home at a factory or satellite team.”

The team has steadily improved during its EMX journey. You’ve had success in international races and podums in EMX, what’s next?
Saelen: “We want to raise the bar even further and become a consistent force to fight for the podium. With Weckman we realize that 2019 will be a transitional season, placing in the 12 to 17 bracket early on to become a top-10 contender as the EMX250 series goes on. By all means it was impressive to see what Brian Moreau did in his first year. He won his first moto in Bulgaria and went from strength to strength. There’s a lot to take in when you jump up! The bike is heavier, obviously, you need to adapt to riding a fourstroke, there are more races and the competition is fierce with a lot of experienced guys in the class.”

You could argue that it makes little sense to have older riders in a feeder series?
Saelen: “I disagree. If riders need to take that route again to rebuild themselves before graduating to MX2 or even MXGP… I don’t consider it a step back, there’s no shame in that. Go for one year of EMX250, show what you’re made of, why not in combination with some wildcard GPs. It’s been a proven recipe for guys who went on to do well.”

I always wondered where the Diga team name came from?
Saelen: “I founded the team initially back in 1998 with a friend of mine Gary Reynders. So he was the Ga in Diga but he quickly left to pursue his dream working in GP racing and became MotoGP crew chief later on. (smiles) So only the Di of the ‘founding fathers’ is left, but he’s going nowhere because he’s on a mission!”

Thank you for your time Dirk!
Saelen: “My pleasure!”