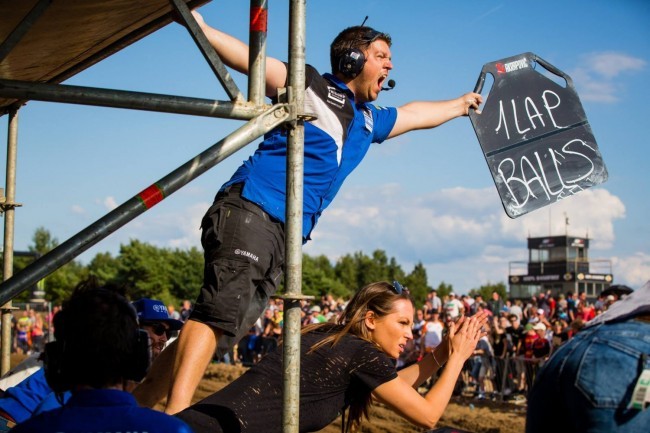 Dennis Dierckx had a good Motocross racing career himself racing the GP’s and even representing Belgium at the Coupe de l’Avenir on a number of occasions. After hanging up his Motocross boots he became a mechanic and has worked with 24MX Honda in the past. Currently, Dierckx has a role with Wilvo Yamaha who became a full factory team for the 2020 season so it’s very exciting times for the team with a strong three rider line up.

We caught up with Dierckx to ask him about his career and role as a mechanic as well.

Gatedrop: How did you first get into the sport and when did you think you could race professionally?

Dierckx: My dad always raced before so it was pretty clear for me that I would be a motocross rider one day as well. After 2 years in the European 250 class I had a wildcard for the GP in Namur 2006. I qualified myself on Saturday and after this weekend I realised that with some extra training it would be possible for me to race professionally.

Gatedrop: You raced some MX2 World Championship GP’s in 2007 and 2008 – what was it like racing with the best in the world and what was the level like?

Dierckx: As a rookie in 2007 it’s always strange to race the best of the world. I raced against some of my idols so that’s a strange feeling but as a kid there is nothing bigger than to race against the best in the world. I think the level was high as it is still now. The only thing I miss now is the real qualifications where only the best go and race on a Sunday. I’m still sure some riders who riding MXGP now would never make it to a Sunday back in the days.

Gatedrop: When you look back on your Motocross career, what races stand out the most and why?

Dierckx: Difficult question, the day I became Belgium champion 250 was a special day. Also, the coupe de l’Avenir in 2006 I had a really good day. The first GP qualification in Namur was also nice. For the rest I’m from Belgium so I loved all the Belgium international races. A shame there are not that many events any more.

Gatedrop: You rode the Coupe de l’Avenir I think on three occasions representing Belgium and winning, what’s your memories from this event?

Dierckx: I loved this event. In 2007 I won two of the three moto’s, it’s a shame I crashed in the third race and lost the overall with one point. 2008 we won as team with Dennis Verbruggen and Jeremy van Horebeek. It is always nice to put your name on the winners list.

Gatedrop: The sport doesn’t seem to be as big in Belgium now as when Everts was riding with lots of tracks closed etc. Does that make you sad and what’s your thoughts on the future of Belgian Motocross?

Dierckx: Yeah, it makes me really sad. Especially when you see like Holland or France they have way more tracks than we have. All our hope is on Liam now, he is on a good way and knows how to act in front of a camera. I think this is something really important for sponsors and media attention. I hope he and Jago Geerts can bring the sport back on TV in Belgium.

Gatedrop: After racing you landed a job as a mechanic in the GP paddock, Motocross has pretty much been your whole life. Being a former GP rider yourself, do you think that helps you deal with riders? You know what they want, how to deal with them etc..

Dierckx: Yeah in one way I think it helps. But maybe more mentally than mechanic wise. I think you know better on what moment you need to speak and when to be stop. – when to support and when to give critics. Especially now if you see with how many people a rider is surrounded with, it’s not the mechanic’s job to tell the rider what to do. 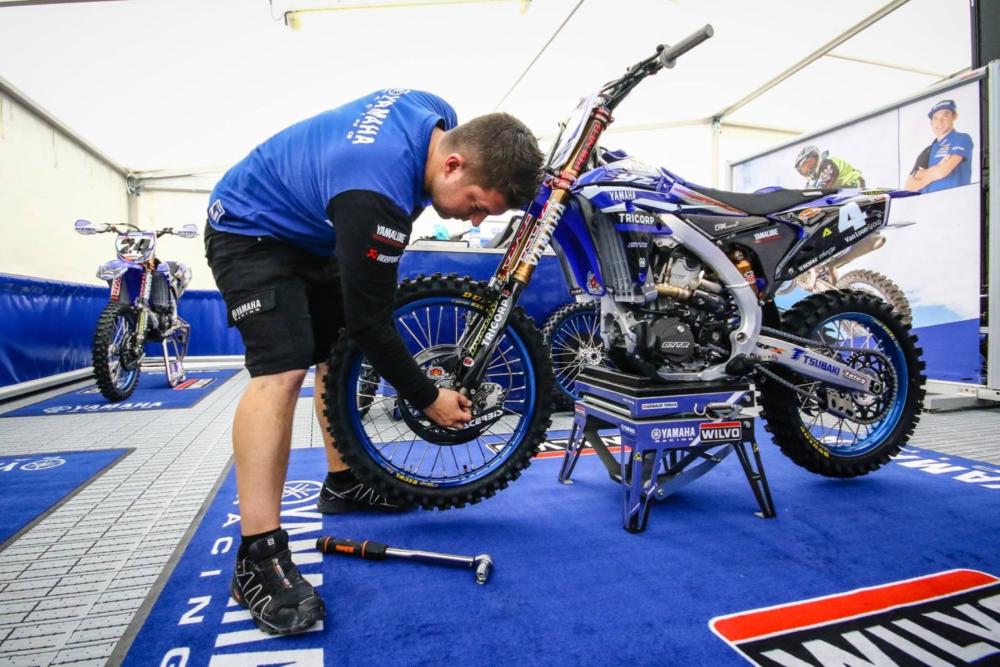 Gatedrop: You’ve worked at 24MX Honda and now Factory Yamaha. How was it switching between the team’s? 24MX Honda were a privateer team and Factory Yamaha – there’s not many better in the paddock!

Dierckx: It’s really difficult to compare those two teams. With 24MX we were with 2 mechanics for 2 riders. I think we have like 12-15 people now for three riders.  I really loved my time with 24MX, it was a good school for me. After some years I found that time was there to go to a bigger team and I came in contact with Louis Vosters. After a small talk with him I straight away had a good feeling. If you see after 4 years with Wilvo how big the team has became, I can only be proud on what Louis and the team has achieved.

Gatedrop: You are currently working with Arnaud Tonus, what’s he like to work with and what’s his mentality like?

Dierckx: I’ve worked three years with Arnaud and I’ve loved working with him – nice guy, nice family and it’s a really nice time. Like every rider he has his own vision about training, mentally an physically. I know Arnaud puts in a lot of effort in his mental game and I’m sure it will pay off soon. This winter when Wilvo became factory Yamaha I had the chance to become parts manager. I order the parts now and control the stock. 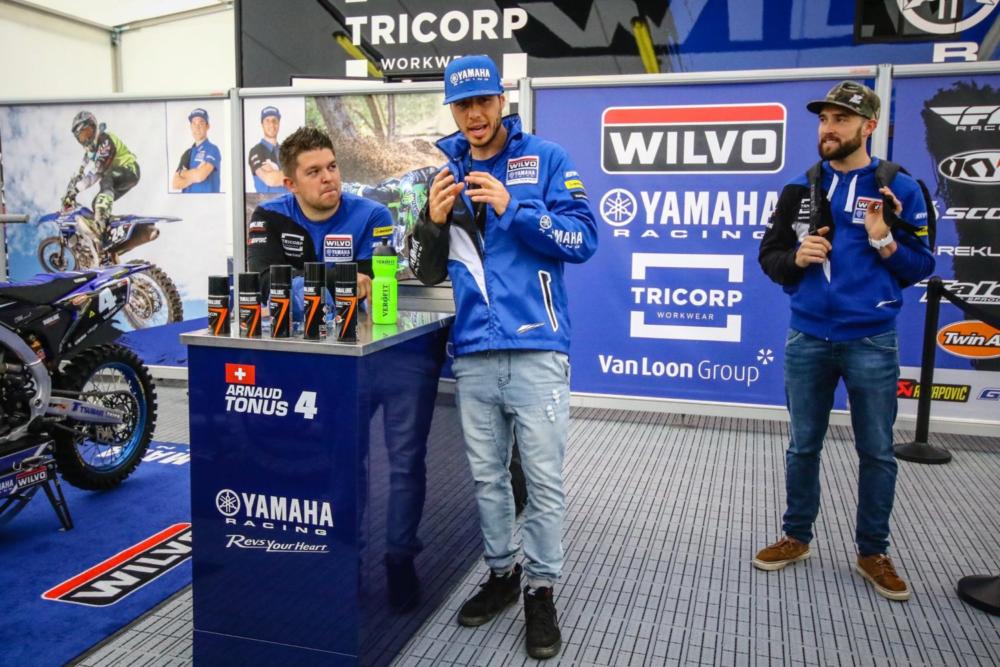 Gatedrop: You’ve worked with a number of riders in the past – which rider(s) did you enjoy working with the most and why? Was there anyone hard to work with?

Dierckx: I loved working with Ken de Dycker. It’s a shame he got a big injury in that year but still now we are really good friends. All riders have their own ideas but hard to work with not. At the end it’s our job to make even the most difficult guy happy.

Gatedrop: The level of MXGP at the moment is incredible – how important is it to improve even if it’s just to find a tenth of a second?

Dierckx: Super important, every detail counts these days. All brands are working really hard to improve and the level is super high.

Dierckx: I miss riding sometimes but only for fun, the competition I don’t miss. Maybe also something you learn as a former racer – mechanics have a hard job but also the riders. People only see the the nicest part of the job. As a mechanic the weekends are nice and the effort is in the week, for the rider this is different. People only remember that he is on the couch Monday or only a bit cycling after a GP but I know you don’t want to feel what those guys body feels like after a race weekend.