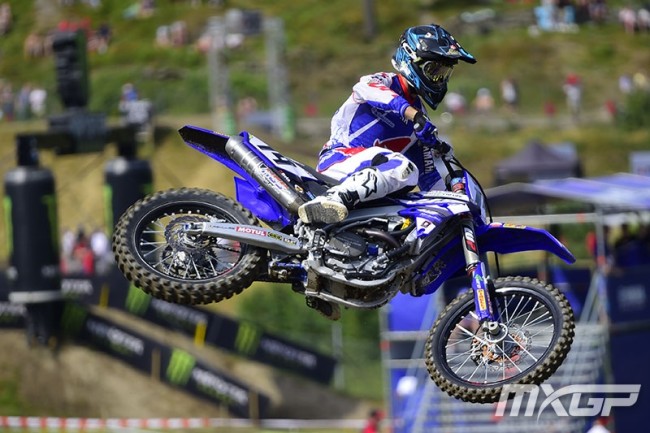 2008 MXGP world champion David Philippaerts is stepping back from full-time racing and concentrating on training riders for the 2017 season.

Philippaerts original DP19 team has joined forces with SDM racing to increase the work force and experience which will allow David to focus more on the riders development and not the logistical aspects of running the team.

Philippaerts is known as one of the toughest riders in the sport, rebounding from serious injuries and working hard to achieve his dream of being crowned world champion. His experience and know-how of GP racing will no doubt prove invaluable to his young riders.

We caught up with David to discuss this new part of his career in motocross.

Gatedrop: The news is now announced that DP19 and SDM Racing have joined forces to form a new team called ASTES4-TESAR Yamaha, how did this all come about?

It was a very important decision in my life. I wanted to create a really strong team but to grow and by itself would have been impossible, together we are stronger and we can settle the riders and the team.

Gatedrop: You won’t be team manager of the team, do you think this will be good for you as you will be able to work more closely with the riders and that is probably something you’re better at?

My role is more important now I will follow the riders and the whole technical part of the bike and the team, so I will be more concentrated and I do not think about sponsors or to transfer or mechanic.

Gatedrop: A few years ago you decided to start your own team, how hard was it being team manager and the rider?

The first year was not the most difficult. this year was very tough with three / four riders each race. To be present at all the training was very hard but it made me grow and understand many things that I will be able to use with this team.

Gatedrop: Did you start running your own team because it was the only way to remain in the MXGP paddock? If this is the case it must have hurt not being able to secure a rider with a top team..

In 2013 with Gariboldi has not been an easy season after two years of injury to my wrists. At the end of 2013 I had to look for a team for 2014 and all the teams wanted money to make me run. At that point I called Yamaha to see if they could give me a hand and they were very happy to help me, but they did not have a free place in any team. I made some calls to my sponsors and to form a new team, for me it was not just for one year but I started to think what to do in the future and I liked a lot. and then with a call with Yamaha we started the whole DP19Racing.

Gatedrop: Do you plan on racing yourself next year?

Next year I will race around the Italian championship and 2-3 MXGP race with the team.

Gatedrop: You had a pretty successful career yourself  in MXGP, winning the world title in 2008, what are your memories of that year – you had some superb rides like Mallory Park that season where you came from the back to the front. Those memories and achievements must be pretty special?

I remember the most beautiful memory was the pass of Ramon in Loket after I crashed at the start and I caught up to the third position.

Gatedrop: You are known as one of the toughest and hardest workers in the sport, is that dedication something you feel you can bring to the young riders as well as their riding technique?

I am very good to ride a bike but not as big a talent like Cairoli or Herlings .. I had to work a lot in training to win. I believe when a guy you’re training works very hard it is more easy to win and that is what I teach. I won thanks to the training and I explain that to the riders.

Gatedrop: Next season the MXGP is stacked with talent, everyone wants to see how Herlings will do, but who do you see winning the title?

I think he will be one of the winners, but in motocross to the end you never know who can win but he is a candidate.

Gatedrop: For next year you have three strong riders in the EMX250 championship, do you think it’s possible to win the title and which rider do you believe has the best chance?

I think we have a good chance we have three perfect pilots for the championship. Roan is the young man who is growing and can do well, Maxime is the talent that has already showed good things also the MX2, and Karlis I think that with a good training he will be successful,

Gatedrop: You have been working with Roan Van de Moosdijk already for a year, what is he like to work with and what do you expect from him during his rookie year in the EMX250 class?

We did great together with his family and his lifestyle, I like his driving style in motion, it is very clean with very few mistakes. I expect a good year, he has to grow and work and gain experience in the races with the new bike but I think he’s ready to get excellent results.