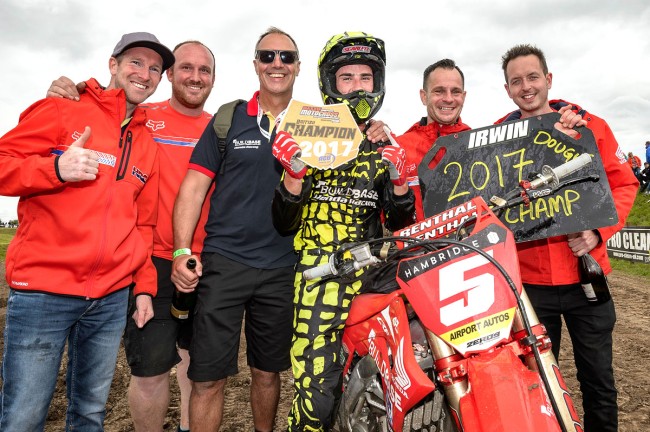 With the announcement that Graeme Irwin’s motocross career was ending thanks to his badly broken wrist at Imola, we thought it would be a good idea to get the thoughts of the man that guided Graeme to his British MX1 championship, Dave Thorpe.

It was three-time 500cc world champion Thorpe and the Buildbase Honda team that saw Graeme have his best British championship season and reach a lifelong goal of being British champion, making him only the second man to win the big bike title from Northern Ireland, along with Gordon Crockard.

Graeme was established when he came into the team but he went onto win the British championship with you, what did you see in him and what did you bring to the table to get that title?

The first thing to say is that it wasn’t just me in the Buildbase team, he had a super mechanic in Rob, he gelled very well with Ryan with the engine so I think between us all we kind of gelled as a team, I think that was the key. Graeme’s raw speed has never been in dispute and I just feel he really suited the Honda, I feel the Honda was made for Graeme, as we know the Honda chassis is second to none, and Graeme will be the first to say there are times when he gets into a little pickle because of his own exuberance!

It was a team effort and when I look back I think my influence was maybe from having experiance really. If you remember, Graeme had dislocated his shoulder at the Des Nations at Maggiora (end of 2016) and when we started to test with him in February, Graeme was a fair way off the pace of Martin (Barr) at that time and it proper threw him.

My words of wisdom then were, when we went home, I reassured him that while he was going start on a much lower level than he wanted too but he would come, very, very good right when he needed too. I think those words of encouragement and reassurance helped Graeme at that time because none of us like to be whipped by our teammate in testing! But I felt he had time on his side, he felt that everything had to be right in February but we reassured him that while the season starts in March, it doesn’t really get going until May, June and July.

I think it really sat in his brain and brought him some sort of comfort that he didn’t need to panic. I think from my side that was really the biggest influence we had on him at that time. As a team we gelled and he gelled extremely well with the Honda and when he said to me he was going to go Grand Prix racing, I was really disappointed because obviously it’s not on our radar and that meant we were going to lose a guy that had an amazing work ethic and was dedicated to the cause.

There was a period of time where I thought, ‘this is going to be tough,” but when one door closes another opens and Jake Nicholls appeared and I have exactly the same person in Jake Nicholls that I had in Graeme Irwin, he gelled well with the bike and they give you 100 percent and that is all you can ask for as a team manager.

Graeme seemed to smooth out a lot on the Honda, was that something you feel you contributed too or was he just enjoying the bike?

I think the bike helped him too smooth out and he worked really closely with Ryan and as we all know, 450s can be very beasty, they are a difficult bike to race at the highest level. He world really closely with Ryan and Rob and had a brilliant relationship with Mark Eastwood on the suspension and it all pulled together, okay you could say he was maturing as a rider and I think he was, but the whole package of everybody I think it helped.

In that year I was very fortune, I had two of the most professional guys in Martin and Graeme. The team I have now with Jake and Josh, they are a similar vein, their work ethic is second to none. Quite often, when you are a team manager and sign riders, from the outside looking in, you never really get to understand what animal you are dealing with until they are in your team. Fortunately for us at Buildbase Honda, Graeme and Martin as well as now with Jake and Josh, their work rate is second to none.