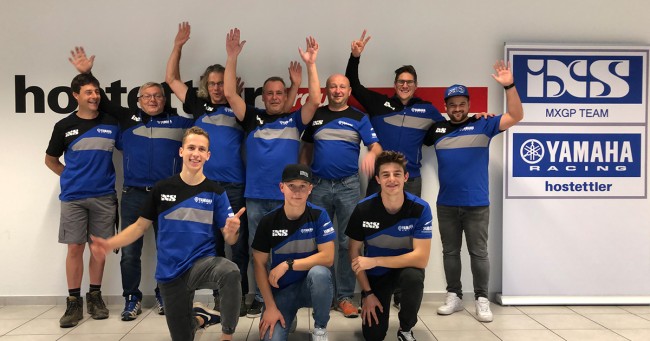 There’s no doubting that Cyril Genot is a big talent and he’s finally secured a full time MX2 World Championship ride after it was announced earlier this week he’s signed a deal with the IXS Yamaha team.

The young Belgian has a lot of potential and already knows how to ride fast in the sand. The area he needs to improve is hard pack – if he can do that he could be one to watch as he has a lovely style on the bike.

It’s going to be an important winter and season for Genot in terms of his future, it might end up being a make or break season for him but he’ll hope for some good results throughout the course of the season.

We caught up with Genot to discuss his plans for the 2020 season and much more.

Gatedrop: You’ve signed with the IXS Yamaha team for 2020, when did the team first show interest in you and how did the deal all come about?

Cyril Genot: It all started at the beginning of august, a week or two before Lommel. It’s actually my sister who coincidentally talked about me and what I was looking for in 2020 and it all developed from there.  I’m pretty happy there was already interest in me before the GP of Belgium, even though for sure the results there did help me out afterwards.

Gatedrop: You haven’t raced a Yamaha since your EMX125 days, how do you feel about making the transition back to Yamaha – nervous, excited?

Cyril Genot: I’m really excited to ride with the Yamaha. The bike changed a lot since 2014 so you can’t really compare it. I do like the feel of it. I can’t wait!

Gatedrop: You ended this year with the A1M Husqvarna team, at times I thought you rode really well. How would your describe your time with the team?

Cyril Genot: I can’t thank enough the A1M team for being the only team believing in me after the nasty injuries I got the years before and giving me a chance to show my hunger to come back to a better level than I was on before. Without them, I would’ve never had this opportunity. I will never forget what Tanel did for me!

Gatedrop:  You worked closely with Tanel Leok, what sort of things did you pick up and learn from him?

Cyril Genot: He gave me the chance to grow and make progression throughout the year without putting any pressure on my shoulders. We got to know him and his family better along the way which is very nice because I travel with my family as well. We had fun times.

Gatedrop: In terms of the IXS Yamaha team, will the team get any support from Yamaha? I’m sure you’d like more than a stock bike in MX2 again!

Cyril Genot: We won’t get any “factory ” support if that’s what you mean? We have got the support from Yamaha Switzerland. But the team and I will try to work as hard as possible on every aspect to get the best out of it. Hopefully we can have a good winter and build together slowly!

Gatedrop: Where you will be based for the season and during winter?

Cyril Genot: I’ll just be based at home. At the moment it’s the right place to be.

Gatedrop: I feel like you can ride sand really good but just need to work on the hard pack tracks, will riding lots of hard pack be on the agenda during the winter prep?

Cyril Genot: I need to get better on hard pack that’s for sure. Now that I will have more time to prepare, it will 100% be on my agenda. It won’t be in Belgium where I’ll get to learn it (laughs).

Gatedrop: What are your goals for the 2020 season?

Cyril Genot: Staying injury-free and try to fight for points.

Gatedrop: Have you planned yet which pre-season races you might contest with the team?

Cyril Genot: We normally will race the last two rounds of the International Italian Championship at the beginning of February. I will for sure race the MX2 World Championship. We still have to plan which extra races we’ll pick out.