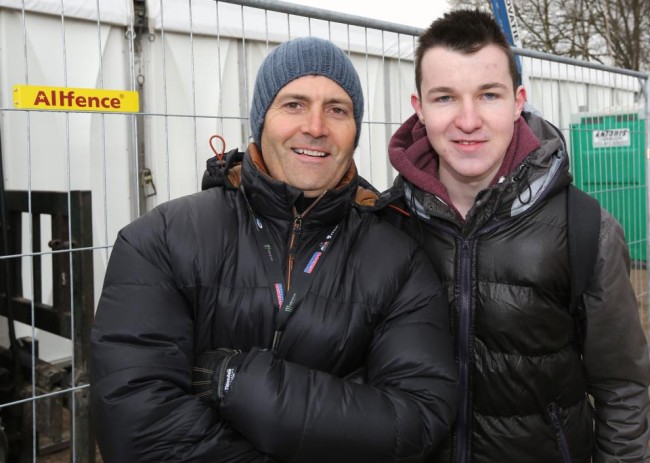 This season Ryan Villopoto will be trying to win America’s first World title for 20 years! Yes. it is an incredible statistic but it really has been that long!

The last American world champion is one of motocross racing’s nice guys, Californian Bob Moore, who now works as an agent with riders in MotoGP, MXGP and US MX/SX.

It was back in 1994 that Moore took the 125 world championship, a long nine years after he first arrived on the GP trail. Moore had contended for both the 250 and 125 titles in that time before finally clinching the title he wanted so badly on the famous black Chesterfield backed Rinaldi Yamaha.

Open, friendly and still possessing a passion for the sport that took him to the GPs in 1986 as a teenager, Moore chatted freely about anything and everything to do with motocross.

Sit back and enjoy a fascinating insight into the life of one of the GP legends from the 90s.

Gatedrop: When you came over back then it was probably harder to live with all the different borders and currencies.

[quote_center]”It comes down to the day to day living -that is one hurdle you have to overcome. To be honest the first two years I raced over here I hated it – it was just brutal.”[/quote_center] I spent all of the money that I raced travelling back and forth to the states. I spent over $20,000 in airfare going back and forward. It was so hard for me to live and be away from my friends.

Gatedrop: Going back to your career, you won the world title but you were competing in the world championship for a long time and always up there, what are your fondest memories of that time?

I think what I took looking back at it now was the people I met and it changed me as person. I can easily say that if I took the route of supercross and staying in America I would have been a different person .

You have a really different outlook living over here. I was living with an Italian family and doing the whole Italian thing more than any other country but it changed me. It is something I really appreciated and was fortunate enough to be able to do.

In 2011 I brought my family to leave in Italy. My wife and I talked about it a few years ago and I wanted to bring my kids over to see what life was like here. I knew it would be challenge because my kids are 16 and 14 years old but I wanted to show them something other than Southern California. You get in this bubble in California and you think everything is like that and it’s not.

We lived in a beautiful place in Florence, Italy. We put the kids in a private school and they learned Italian, they didn’t complain and they really got a different perspective.

Of course of you ask them now they like California where they are from but if you ask them in ten years I think they will say it was pretty cool because not a lot of people have been able to do that.

Gatedrop: You had a big crash in Foxhill in 93 did that affect you much?

Moore: I was really struggling that year anyway. I had a really good year in ’92, I was racing for Rinaldi and I wasn’t factory rider I was more a satellite rider but I ended up getting second in the 250 world championship. Then I went to factory Suzuki and for whatever reason that bike never suited me well.

I was maybe a bit too over zealous on that jump. I remember I got passed by another rider and I was just like ‘man, I got to get by this guy.’[quote_center] “But I went too fast and hit the lip at the top and was rolling windows down twenty feet in the air going 40mph. I landed and shattered my ankle, out of all the injuries this left ankle is still…on a day like today (cold) I feel it.”[/quote_center] I shattered the pivot bone in there, it’s still sore today. I didn’t get surgery but that was because it was all broken into pieces.

Gatedrop: To come back and win the 125 world championship the year after then was a great achievement.

Moore: Yea and an interesting statistic about me and Foxhill was I either went to the hospital or I won the Grand Prix! I got two wins and two hospital runs!

To win the GP at Foxhill in ’94 was great and I nearly won the championship that day but Chiodi at the time made a couple more passes and kept me from winning. But I just had to go to the last round and get a fourteenth to win.

It was funny because I don’t know how other riders are when they win a world championship, but for me it was something that I waited for my whole life.

It took me nine years to get to that point but after that race (Foxhill) I wanted to scream and yell because I had won it, but really I hadn’t quite because something could happen (at the final round) my bike could blow up and I could lose!

I was wanting to be so excited after than race but I had to go home and ride and train for two weeks. The final race we went to in Belgium and for the first moto all I wanted to do was get a start. If I got a decent start I was going to win the world championship.

I remember going to the GP it was like – you know when everything works perfect for you? Well, the gate felt like it dropped three seconds earlier for me. I got the perfect start, got into the lead and I went as fast as I could and won by eleven seconds. That was the final moment when I could finally scream, ‘yeaahhhh!’

Gatedrop: Did waiting the nine years make it sweeter?

Moore: It did, I did not race without injuries every single year of my professional career. I broke an arm or a leg or ankle and even the year I won I broke my thumb in January. That didn’t bother me because the season didn’t start until April but then in December I broke my tib/fib and dislocated my ankle.

I didn’t escape injury free like some of the other top riders can do but I am blessed to have one championship, have three second places and I won a ton of Grand Prix. More importantly I met a lot of cool people.

Gatedrop: I guess it gives you the connections today to do your job now.

Moore: Yeah that is how I have a job now. I knew all these people and when I decided to become a manager I was lucky enough that riders would say, ‘I know Bob, I’ll trust him to do my contract.’ That’s how I got into it and the people I deal with now like the boss of Yamaha for MotoGP –  he was my boss when I won my world title.

It’s the same type of people, some are in MotoGP now but some are still in motocross. It’s just because of me being around so long and knowing so many different people I have been fortunate enough to have this job.

Gatedrop: I remember you made a one off comeback in ’99 for FMF Honda when you were the team manager.

Moore: I don’t call it a comeback! I was that guy that looked at riders that came back… this sport is too hard when you get to that level you cannot retire and come back at the same level. I don’t care who you are it’s never been done, whether it’s Michael Jordan or whoever – you can’t do it, it’s too hard.

I was getting pressure the whole year by the team. I would go out and ride with the riders and I was usually faster than them on outdoors. I did it because that year they were bagging on the bike so bad and I was saying, ‘look I can ride it,’ and they would say ‘come out and race!’

So I said I would do one race. I was going to do the first round at Glen Helen and I ended up separating my shoulder. So then I said I would do Mt Morris. I was in fourth until the last few minutes of the first moto and then we had some problems with the bike and I almost endoed on the finish line jump and i just pulled over and said, ‘ you know what? I don’t get paid to do this, this is too dangerous!’ so I just parked it and that was it!

Gatedrop: It was a pretty cool story to come back and beat the riders you were managing!

Moore: Yea well Tallon Vohland was running second so I wasn’t quite beating everyone but it was a good time. I retired the year before but I still won a GP in ‘97 – the Spanish GP.

I was still young enough to compete for a few more years but the reason I retired was because if I felt I couldn’t win a world championship I didn’t want to race. I didn’t want to be that guy out there collecting £100,000 and finishing eighth or seventh in the series – that wasn’t a motivation for me. Then when I got the opportunity to manage with FMF Honda and work with the young riders it was perfect.

One of the toughest things to do is to find something to do that you really enjoy. For a lot of riders this is all they know. They don’t have any passion to do anything else. I was fortunate because I had a job I could get paid to do something I love to do. The riders need to find a place in racing somehow whether it’s as a goggle guys or clothing guy or team manager. You look at Stefan Everts and he is doing well. It’s tough too with our economy to pay a guy $50,000 plus all the travel, it’s tough but I was fortunate to find a good job.

Now I am doing MotoGP and our company is still looking to get into F1 and that is a final thing from a motorsport perspective but we are a smart company and we aren’t going to make silly decisions. We are taking it step by step.