Interview: Ben Watson on his Lommel podium and dealing with pressure 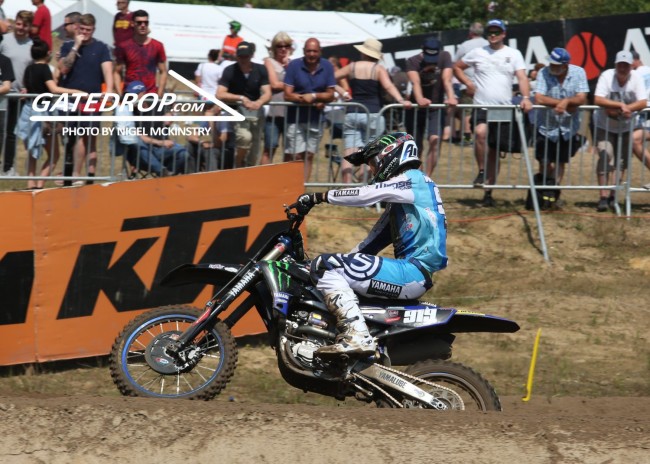 Coming into the season, a lot was expected of Ben Watson after finishing fourth in the MX2 World Championship in 2018. Could he be one of the guys to challenge Jorge Prado for the series this year?

The start of the season didn’t go to plan, perhaps due to too much pressure Watson put on himself as he expected to be a regular podium visitor.

After a recent injury, Watson made his return to racing at a brutal Lommel track – not an easy track to ride when your 100% fit never mind carrying a slight knock.

Despite only have two days back on the bike, Watson excelled and ended up on the box finishing third overall. With the pressure off, Watson looked much more free on the bike and rode with a lot more flow.

We caught up with the young Brit to discuss his podium and much more.

Gatedrop: Ben, a podium for you here in Lommel after missing the last few GP’s. You must be stocked with the podium! Can you talk me through your moto’s?

Ben Watson: Definitely, I am really happy obviously. Six weeks with no racing and only two days back on the bike, I came to the toughest GP on the calendar. I had no expectations, I just wanted to go out there and enjoy myself.

In the first heat, I had a nice start and had a good first few laps. I tried to settle into a rhythm but I slowed down a little bit too much and started making a few mistakes. I got passed by a couple of guys and then found my rhythm coming in at the end of the race and ended quite strong. I was happy to finish fifth in that one.

In the second heat, I had a good start actually. I wheelied the whole way down and took pretty good speed down the straight. The first laps, I was really happy with myself because it was an area I was struggling with before. I came through to fourth quite early on in the race. I was riding a lot better in the second heat. I made a couple of mistakes and then Jago (Geerts) bike broke which put me up to third. I had a good race and I really enjoyed being back in the mix with everyone. I feel like I’ve made some improvements actually with my time off.

Gatedrop: You were only back on the bike two days, where you riding in any pain? It certainly didn’t show with your riding if you were!

Ben Watson: No, I had no pain with my hand where I broke it but obviously with missing a lot of riding I got terrible blisters on my hands. That was really annoying and was kind of on my mind. With what’s already a tough GP, silly things like massive blisters on your already not 100% hand isn’t the best. It’s just one of those things and I gritted through it and was happy with the outcome actually.

Gatedrop: What did you make of the track this year? I think it was probably rougher than last year and did you enjoy it out there?

Ben Watson:  I’m going to say it was definitely tougher than the previous years. I don’t know if I’d say rougher but I think they added a few small technical parts to the track and it was just with the rain we’ve had this week it made the track really heavy. The bumps were like solid and there wasn’t any give. The corners and just everywhere there was something.

There was no time for rest this year and I feel it was tougher physically than previous years actually. You speak with so many people and also watching on TV so many riders were just dead. You know, at this level with the amount of training we do, it’s incredible to see people struggling at the end of moto’s. It’s cool, you get to see who works the hardest really in these situations.

Gatedrop:  Coming into the season, I expected a lot from you, you probably expected a lot too but things didn’t start so well. Do you think you put too much pressure on yourself after a good season last year?

Ben Watson:  Last season was really good, no one expected a lot from me. They signed me as like a top eight or top ten rider and maybe the odd top five on a good day.  I exceeded expectations from myself and from the team. I had no pressure the whole season and just enjoyed it, I really had a lot of fun during the 2018 season.

I came into this season and expected a lot from myself, the team expected more and I was now a top guy in the class.  You never know with injuries, especially now, Prado can easily go and the title is there waiting.  I was thinking too much about results, speed and standing on the podium lets say.  For me, I just put too much pressure on myself and I think that’s why I’ve had a solid weekend here,  I came here with no expectations and just went out there to have fun.

Gatedrop: Just on next year, a lot of guys are moving up to MXGP including Prado. The title will be wide open but you probably won’t want to put too much pressure on yourself again. When you listen to someone like Gajser, he says he always wants to go out there and just enjoy himself. Will you try to have a similar approach in 2020 and the future as it seems to work for you?

Ben Watson: Definitely, I’ve learnt a big lesson now with this injury. I had time to sit down and say where I can be better and what the problem was this year.  I was just expecting way too much from myself and when I wasn’t doing good or getting a good result, I was so disappointed and I just wasn’t enjoying my year or my riding like I did last year.

That’s why I’ve said during this break that I just want to go out there and have fun now, the championship is over.  Coming back from injury, no one is expecting much from me and I don’t really expect it from myself either but deep down inside I know what I can do. I think that’s a big part of why I’ve come here and got on the box again.

Gatedrop: You’ve made a strong case to get selected for team GB in Assen now. You should only get better with more riding time and also you did good at RedBud last year. Have you been talking to Mark Chamberlain? I’m sure you’re hoping to get selected.

Ben Watson: Of course, there’s five or six guys in contact with Mark. We’re all talking all the time but right now we don’t have a clue what Mark is thinking. We can only wait for the next few weeks I think and just see what Mark wants. Of course I know, I am a very strong sand rider and I feel I did pretty good at the Motocross Des Nations in 2018. Mark has a tough decision on his hands but no matter what it is I’ll support it. If I am selected, I will be so motivated just to have something to try and remember this year by. It’s one race, you go there and just give it everything you have, not just for yourself but for the whole of Great Britain.  It’s such a boost for the riders and last year I enjoyed it so much. The riding and stuff, I was having so much fun at the track.

Gatedrop: Just on the track in Assen, is that a track you like? It’s obviously quite weird because they build it on the MotoGP track so it’s not your typical sand track but how would you compare it to riding Lommel for example?

Ben Watson: Yeah, the sand and all the jumps there are completely new so it’s solid. All the jumps get deep ruts at the top of them, some of the corners we get down to the wooden boards sometimes. I really like Assen, it’s a strange one. It’s quite a bit like a fly away let’s say, because the track is always new for the event. In previous years I’ve done really well there, last year I had a solid GP and two years ago when I didn’t have a great season, I had a strong finish there. It’s always one I’ve been pretty good at so we’ll see. I don’t know what the outcome will be but we’ll stay positive.