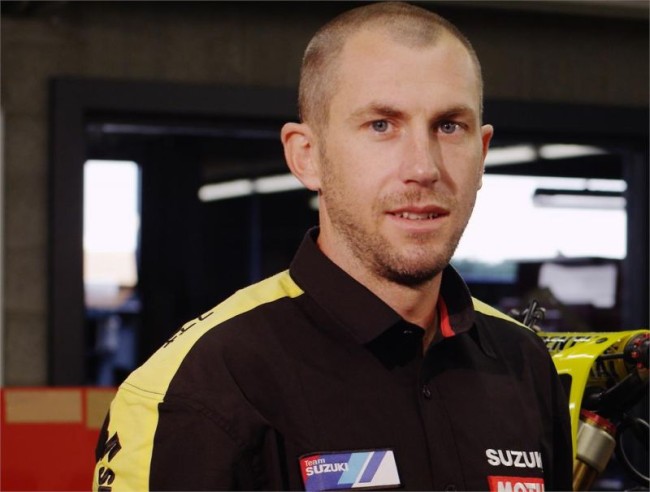 This time last year everyone was getting excited by the prospect of RV coming to race the MXGP World Championship. A year later and we have another exciting story, yesterday it was made official that Ben Townley will come out of retirement and have another bite of the cherry.

After BT’s amazing performance at the nations where he was able to stay close to Febvre and finish an amazing second place it is no surprise that Suzuki targeted BT as the man they wanted in the team.

There is no doubt that Ben Townley coming back is another brilliant story line and will add more drama to the MXGP season in 2016, as if 2015 didn’t have enough!

We caught up with Ben to discuss his decision to come back racing the World Championship.

Gatedrop: We spoke with you at the nations and you said you wouldn’t be coming back.. What changed your mind after the nations?

Ben Townley: Well after my performance at Ernee it opened some doors for me, I had proved to myself personally that day I could still race at that level, so I took a look at this option with Suzuki seriously.

Gatedrop: Did it take long to sort the deal out with Suzuki?

Ben Townley: Yes and no, it was an easy decision for me with their offer, but my family situation is much different to when I raced in the past, so that had to be discussed at length before I could hit the green button.

Gatedrop: Have you got riding the Suzuki yet? What are your first impressions with the bike?

Ben Townley: Yes I’ve just started on one, it’s a fairly standard model for me here in NZ for now until I get over to Europe. My first impressions are great, I really like the balance of the chassis, to me the front and rear wheels are very evenly weighted which I like a lot, it gives me a lot of confident feedback.

Gatedrop: A lot of people are glad to see you make a return, is it nice to have so many fans around the world behind you?

Ben Townley: Yes, it’s really cool to see all of the excitement today after the press release went out, it already gained some momentum a week or so back on the internet, but it was nice to announce it and see all of the buzz it has created. I’ve raced all over the world, so my fan base is global in that respect.

Gatedrop: Does coming out of retirement change your approach to next year in anyway?

Ben Townley: No not at all, it will be the same racing strategy I set in place for the Glen Helen GP and MXON, only I will have a great race team in place to back me up though.

Gatedrop: Do you know yet which pre-season races you will ride? If so, what ones?

Ben Townley: We are still working on those details yet, but I will definitely be lining up in early Feb.

Gatedrop: Is your deal just for this season or longer?

Ben Townley: Yes for now it is just a one year deal, that suited both parties completely. It’s a gamble for Suzuki, and I want to make sure I’m a legitimate contender before I commit further.

Gatedrop: Is the goal to be world champion at the end of the season or would you be content with a top three or five overall?

Ben Townley: Yes that’s my goal, I believe with this team and my mindset that I can have a realistic shot at it but I’d be content with top 3.

Gatedrop: This year we seen RV come and race the GP’s, how did you think he would do and were you surprised by his results?

Ben Townley: I honestly thought that he’d win, but I underestimated how big of a change it was for a US rider coming that way as apposed to going the other direction.

Gatedrop: Obviously there is a lot of talent in MXGP (still rumours of Gajser and Herlings moving up) and many guys can win, who do you think your toughest challengers will be?

Ben Townley: Well obviously Febvre and Cairoli are the two biggest challengers for the title.