Interview: Ashley Wilde on coaching and the Junior World Championship 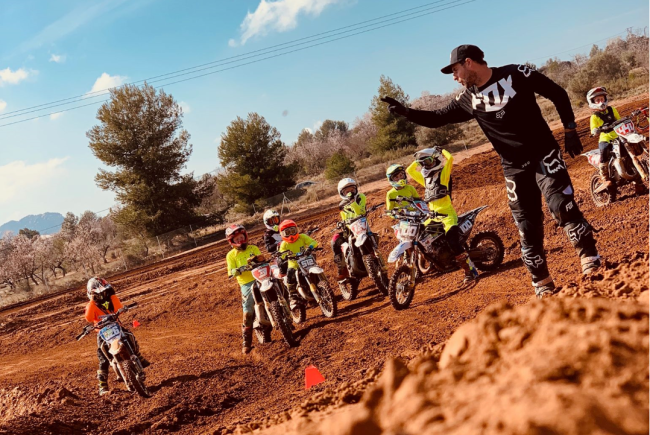 Since hanging up his Motocross boots at a professional level, Ashley Wilde has stayed within the sport but as a coach working with the RMJ Academy.

Wilde has also been coaching the GB team that heads to the Junior World Championship in Italy this weekend.

We decided to sit down with Wilde to get his thoughts on the transition from racer to coach and what to expect from team GB at the JWC this weekend.

Gatedrop: Ashley, since stepping away from racing Motocross you’ve decided to do some coaching instead. How do you find being a coach?

Ashley Wilde: Yeah coaching is my full time job now, I started coaching for the RMJ Academy back in 2014 but part time while I was still racing myself and training within the Academy. The first riders I started to coach in the RMJ Academy was Eddie Jay Wade and Joel Rizzi on the 65s. After that I just started doing more and more to where I eventually started looking after the Rookie Academy full time and now work with the Pro Academy riders also. For me coaching is something I have a passion for and something I really enjoy.

Gatedrop: Being a former top rider yourself, what way would you say that helps you make a good coach?

Ashley Wilde:  I think being a former rider myself helps a lot. I have been there myself and felt the nerves and the pressure of racing. I have also raced the big events so I can relate to the guys when they are in that position.

I also did lots of things wrong when I was racing and learned so much in the last few years I was racing. I always try and help the guys I work with them to not make the same mistakes I made.

Gatedrop: I know you’re close friends with Richard-Mike Jones who’s another good coach, has he been able to give you plenty of good tips?

Ashley Wilde: Me and Rich have been really good friends for a long time. He helped me a lot when I was racing and we now have a great working relationship. We have been working together since 2013. We really bounce of each other and bring the best out of each other. I learned lots of things from him over the years, I learned lots that helped me as a racer and also that help me now with my coaching. With that said he has his style of coaching and I have mine. I think it works really well within the Academy to have both of us coaching. We are both there for the guys we work with.

Gatedrop: The Junior World Championship takes place this weekend and you’ve been coaching the British team. Just how has the prep went with the riders for the event?

Ashley Wilde: The prep has been good! We have been working really hard with the guys in our Academy to get them prepared. The team this year has really come together in a strong way and I think the guys at RHL/ACU have worked extremely hard to give the team the best opportunity to go out and do the best they can.

Gatedrop: Out of all the British riders, who do you think has the most potential for good results this weekend?

Ashley Wilde: I think all the boys have a good chance to do well. They all have their own individual goals and what they want to achieve this weekend. So hopefully they can get their heads down and achieve that. If that happens I will be happy!

Gatedrop: Obviously there’s a lot of talent on show at the JWC in Italy but what do you expect from the guys?

Ashley Wilde:  There is so much talent this weekend. For me I just want them to try and relax and enjoy the experience. There is no pressure from me or the team we just want them to do the best they can! I’m sure they will all give 100% and I can’t ask for no more than that!

Gatedrop: Out of all the riders you’ve coached, who have you managed to work the best with and why?

Ashley Wilde: That’s a really difficult question.. I have such a good connection with every single rider I work with. Everyone is different and that’s why it’s important to focus on the individual. What works for some doesn’t work for others, I try work with every individual and bring the best out of them.

Gatedrop: In terms of the future, which young British rider do you think has the most potential and maybe could battle for a world championship in the future?

Ashley Wilde:  The talent in the UK is very high at the moment! There are lots of guys I’m working with at the moment that are developing really nicely! So we will see how that will work out in the future with some more experience. Short term though, I think both Eddie Jay Wade and Charlie Heyman have the potential.

EJW is already a world champion! Ed has the potential to do it again. It’s just about piecing everything together to do it again! I have every faith in him so hopefully he can pull it all together and bring home another World title.

This year I have been to the EMX 85 championship with Charlie. He has shown great speed and has beaten some of the best at different times through the Qualifiers. He’s been working really hard so hopefully we can piece it all together and who knows!!

Gatedrop: In terms of yourself, what’s your plans for the future? Are you happy with how things are going, would you ever like to get into the GP paddock and start coaching GP/EMX riders?

Ashley Wilde:  Yes I’m really happy with how things are going! I’m really enjoying working with the RMJ Academy and I want to keep pushing to increase the level of coaching in the UK and develop all our riders.

As for getting into the GP paddock It is something I would be interested in the future. But right here right now I’m really enjoying where I am at the moment. I like working with the Rookie Academy and also the Pro Academy riders. If a rider we work with goes to the GP Paddock I would love to go with them and carry the partnership on. But I’m not desperate to be in the GP paddock. I’m happy where I am doing what I am. I would like to be at more EMX races with Eddie if it was possible.

I really enjoyed the EMX85 championship this year! It’s a shame more riders aren’t able to go and race the EMX 65/85 championship. The racing is really intense and some of our boys in the UK would really benefit from racing the EMX series.

My plans for the future are pretty straight forward. I want to keep enjoying what I’m doing and working hard to be the best coach I can be!