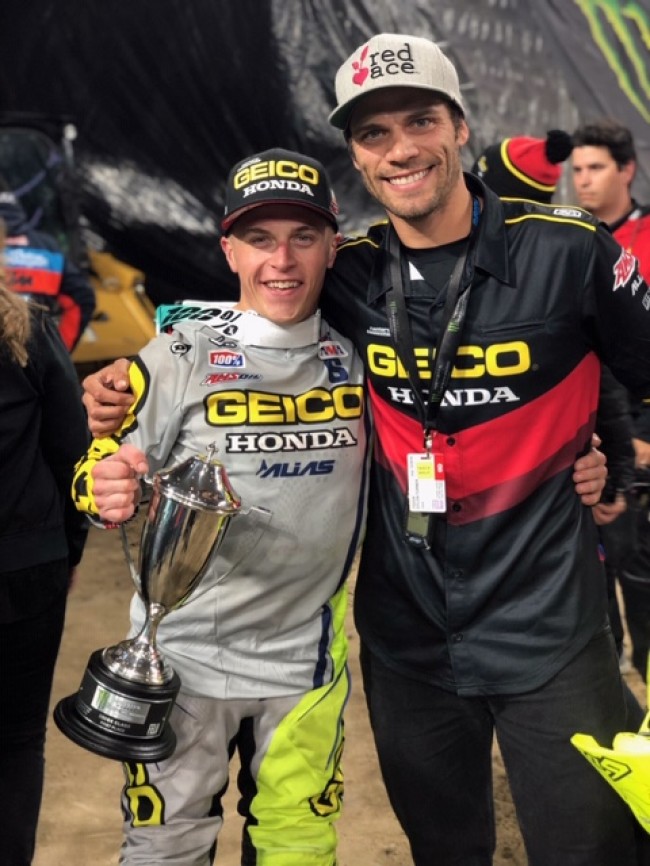 Dylon Turner is a well respected coach in the AMA paddock as he’s been with the talented Jeremy Martin since day one and helped him grow as a rider. He’s also worked with a number of other top talents in the paddock.

Turner was at the Motocross Des Nations in Latvia as Jeremy Martin was competing and he told us after the event that the MXGP riders have a much better technique than the American’s when it comes to Motocross.

Since then the French have dominated the Motocross Des Nations no matter who they’ve selected and America or the other Nations haven’t had a look in.

We caught up with Dylon Turner to get his thoughts on team America at the Des Nations, why the MXGP riders are on another level and thoughts on Jeremy Martin.

Gatedrop: Let’s start with the Motocross Des Nations. What was your thoughts on the event at RedBud?

Dylon Turner: I thought having the event at Redbud was going to be a great chance for the USA to compete with the top riders in the world. After hearing how the riders were preparing I knew they were in trouble. I was very embarrassed even though I did not work with the riders who went. I know a lot of people are embarrassed, including fellow USA riders.

Gatedrop: After the MXDN in Latvia, I remember you sent me a message about the technique the MXGP riders have and that the American’s are behind them in terms of that. Since Latvia it looks like the gap has got even bigger. I personally thought America would have won in their home country!

Dylon Turner: I have worked with Jeremy Martin since 2010 when he was amateur. I hammered him on technique and skill to carry a constant drive around the track along with entry speed through corners. Everything we did was about keeping the gas on as much as possible, even if only partial throttle. We went to Latvia in 2014 and 60% of the Europeans have mastered that skill and it showed. Jeremy broke his foot in qualifying so he wasn’t able to show his skill that weekend. But I watched a rider on a TM (Tanel Leok), with his body form terrible, but kept the throttle open around the track holding Tomac off the entire moto. Right now America is all about “trainers” that focus on off the bike training and group training on the track to create intensity. There is no focus on skill and technique to match the program.

Gatedrop: After Latvia I remember telling you wait until you see Jeffrey Herlings ride who was injured in Latvia. You must be impressed with his sheer speed not only at RedBud but also at Ironman last year?

Dylon Turner: I am not impressed. I know that is what is possible and love to see it. The top American on an MX track can be beat up to 3-4 seconds per lap. I told Jeremy that, along with other young riders I help. Herlings came to Ironman, kept the gas on longer, rolled the throttle on before the corners started. The proof was there, 3 seconds per lap faster than the field. His technique allows him to go that speed for 40 minutes also.

Gatedrop: In your opinion what do you think the American’s need to do to close the gap? Would you put it down to the Motocross tracks in America being very similar?

Dylon Turner: We need riders who want to be the best in the world and not a social media star. The focus needs to come back to the riding on the track and get back to letting the tracks get rough as hell. Leave them, stop prepping the tracks. The Euros ride tracks that have not been groomed for 25 years. Pro riders in America whine if they have not been watered in 25 minutes. We need more sand tracks on the circuit and tracks that get rough and have separation.

Also, it is time for a change in the management and who picks the riders for the Des Nations. I believe Dan Bentley from Geico Honda is the best fit for the job. He wants to win the event and be prepared, we need to all have the same goal in mind. This race is our Olympics. We need to take it more seriously.

Gatedrop: Plenty of top GP riders head to America to race and with the exception of Villopoto no top AMA riders come to MXGP. Would you like to see this happen with the likes of Tomac racing MXGP?

Dylon Turner: I think that is a great example of how much more Euro riders want to compete. Villopoto wanted to retire and went there thinking it would be a walk in the park. Well Tour de’ Europe did not go as planned for him and he had to ride over his limit so far he crashed out. It would be nice to see top Americans go race MXGP. Unfortunately, they are all about the money, so if they do not make as much, they will never go. It would be fun to have Jeremy Martin compete in the far future in the MXGP, he is the only rider with the technique and mindset to go compete against Euros for 8 months. He wants to be the best.

Gatedrop: I believe you’ve worked with Justin Barcia in the past. What’s he like to work with and what do you think he needs to improve to battle for an AMA 450 title?

Dylon Turner: I have helped Justin with his riding, yes. He was good to work with. I showed him where and how to find time at his track in FL. We found 7 seconds in a lap and worked towards that during the 2018 MX season. He needs to improve on the riding skill that I explained earlier in the interview.

Gatedrop: You’ve worked with Jeremy Martin for years, what’s he like to work with?

Dylon Turner: Great! We started off together!! Myself as his coach, trainer and mechanic during much of his career. I have never seen a rider try as hard as he does on a daily basis. He has a vision of dominance, when paired with my vision we were unstoppable at times in the USA. We won his first titles as an amateur together and first races and championship as a professional also. Right now he is the rider to take America to the next level. Mindset and work ethic is off the charts. He wants to beat Herlings straight up.

Gatedrop: He’ll stay in the 250cc class for 2019 – surely his goal is to win the Supercross and outdoor title with a few other guys moving out of the class?

Dylon Turner: If Jeremy is healed from his back injury in time to race Supercross. The end goal is always to win when we go racing, but focus is broken down on how to win. Of course winning both classes would be the vision, but focus is on getting healthy so he can show up.

Gatedrop: Jeremy has always been a very good motocross rider, what do you think he needs to improve on in Supercross?

Dylon Turner: I think with him staying at Tomac’s last season helped him with SX. When I came back to the races and helped him he started winning again. I think we had it figured out. The way he rode at the Foxboro, Mass round, coming from last, stuck in the mud, almost to a podium was incredible. I have not seen a rider ride like that before. He was relentless that day. So get healthy, prepared and he will win Supercross.