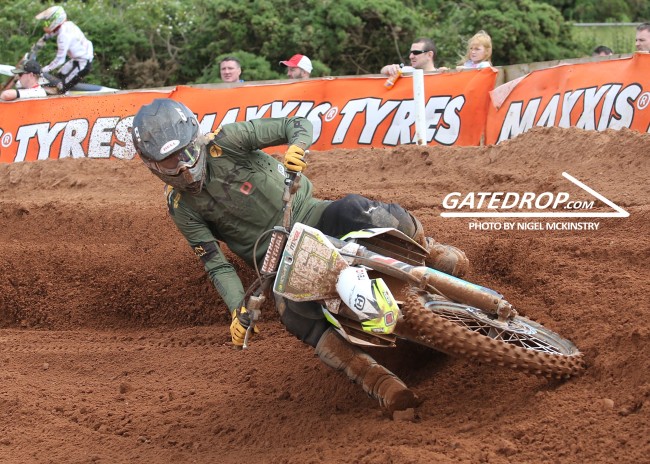 The 2019 season is all change for Swedish talent, Alvin Ostlund as he signed a deal with British team, Revo Husqvarna.

Ostlund since racing in the EMX125 class has always been with Yamaha but decided it was time for change this year and looks good on the Husqvarna.

Despite not so many top ten results in the MX2 World Championship, it’s easy just to forget how fast Ostlund is.

Irish fans got to see Ostlund’s speed at Desertmartin after he showed some great pace in the Desertmartin sand to secure second overall.

We caught up with the Swede to discuss his season so far and much more.

Gatedrop: Alvin, a very solid day for you ending up second overall here at Desertmartin. Can you talk me through your moto’s?

Alvin Ostlund: Exactly, it was a solid day. The first race I had an okay start in around sixth. It took me a little bit too long to get to second and Bas (Vaessen) gaped me a little bit but then we were staying the same but the speed was okay.  In the second race, I had a better start but I got passed on the first lap by Vaessen and also Gilbert I think. I passed Gilbert back and I tried to push really hard to catch Dylan (Walsh) and Bas but they were really fast. We were at the same distance all the time but I couldn’t make it up. I am still happy with second overall.

Gatedrop: In the first moto, as you said it took you too long to get into second. I was surprised it took you so long to get Sheridan and McCormick, what would you put that down too? Was the track maybe too one-lined and hard to pass?

Alvin Ostlund: I always struggle a little bit during the first laps to make passes. My mechanic told me that when I passed them I was running like maybe three seconds faster. I don’t know, it was a little bit difficult to pass but also I need to be more aggressive and I know I need to work on that.

Gatedrop: This is your first time in Ireland and riding at Desertmartin, what was your thoughts on the track? Did you think Ireland had such a good track?

Alvin Ostlund: Yeah, I was super happy when I saw it. I knew directly that it would suit me. I really enjoyed to ride the sand with some hills, that’s really nice. The sand was more deep than I thought but it was bumpy and nice so I liked it.

Gatedrop: The track was pretty fast today I thought, was it still pretty rough or would you have liked it to get rougher?

Alvin Ostlund: It was a little bit too fast in practice but then in the races it was good.

Gatedrop: Just in the GP’s, are you happy with your season? It seems to be that you need a good start as the field is deep!

Alvin Ostlund: I am not so happy, my goal was to be in the top ten and I think I am sixteenth now. I am a little bit off the pace and I need to work on my starts. For sure, the top twenty, they are all very fast guys so it’s important you get a start – especially the first three laps in my case. That’s what I need to work on and I think on a good day that I can be top ten. We are working for that perfect weekend.

Alvin Ostlund: It’s going really good. The team is very good and I like everybody. I was with a Yamaha for a very long time so the switch at the beginning was difficult to find the perfect set up for me. We spent a lot of time doing testing during the winter and we’ve found a very good base so I’m happy with it. I hope that I can stay another year and that we can progress with the setup and everything.

Gatedrop: Would next year be your last year in the MX2 World Championship or would you have another year?

Alvin Ostlund: No, next year is my last year in MX2.

Gatedrop: What will your expectations be for 2020? It’s important to deliver in your last year to secure an MXGP ride.

Alvin Ostlund: For sure. I want to be consistent and show progress during the season. I want to be in the top ten, that’s my goal every race.

Gatedrop: I would just like to ask you what your thoughts on the MXGP track prep is this year? They seem to be grooming the tracks quite a lot. Do you think they’re doing a good job or would you like them to leave them so the tracks get even rougher?

Alvin Ostlund: I really don’t like it (grooming the tracks). I really miss all the really rough tracks. They flatten way too much and everybody can go fast when they fix the tracks so much. I would like it way more rough for sure, I’ve read some comments but for sure the take off’s and stuff they should flat but not the corners and straights.