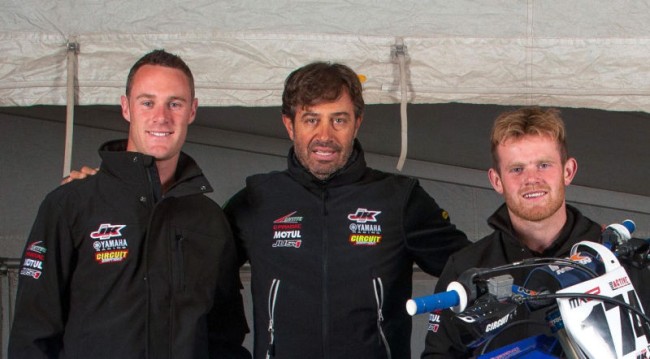 Last month, it was made official that Alex Snow has secured an MXGP ride for the 2016 season as JK Yamaha have signed him to represent the team. Alex has been around the British scene for a number of years now but has had a few tough years.

However, Alex now has a new challenge next year as he will ride against the best motocross riders in the world and he is motivated to get some good results. It won’t be easy but with hard work anything is possible and it is good to see another British rider compete in the GP’s as Alex will join Shaun Simpson and Tommy Searle in the premier class.

We caught up with Alex to discuss the deal and get his thoughts on the season ahead.

Gatedrop: How did the deal with JK Yamaha come about?

Alex Snow: I was very fortunate to be involved this year with Clinton Putnam and Dickie Dye. When it came close to deciding what direction everyone was going down for 2016 they asked me if I’d be interested and from there Clinton put the deal together with Riccardo at JK.

Gatedrop: Did it take long to get the deal sorted?

Alex Snow: It’s wasn’t to bad to be fair. Obviously to plan a full GP season doesn’t happen overnight but the combination of Clinton and Jk working together the ball has been gathering speed quickly and is looking good now.

Gatedrop: You have experience of racing the World Championship before, have you missed not being in the paddock?

Alex Snow: Yeah I’ve touched in and out a bit and have always loved the atmosphere, but never really had the chance to have a good run at them. It defiantly makes a big difference when you get in to the routine and used to being there so I’m excited to finally get that chance.

Gatedrop: After a few tough years are you surprised to have an opportunity to ride the World Championship again?

Alex Snow: I’m as surprised as anyone! This year was dog shit for me, I had lots of small injuries and never enjoyed my racing really. With British motocross suffering it can be tough to keep up the high motivation you need but this is the fresh change I’ve been needing.

Gatedrop: You have had a few tough seasons due to injuries etc, are you motivated to put those that behind you and push on with your career?

Alex Snow: Yeah for sure, it’s can only go back up from here! I’m involved with some extremely positive people and a team I feel I trust 100% to supply me with the opportunity I need to do the job in hand, motocross is a roller coaster as we know!

Alex Snow: I’ll be in different places, initially in Italy for pre-season then we will hover around Belgium and the U.K. Depending on the races coming up.

Gatedrop: Have you tested the JK Yamaha yet, what’s your first impression with the bike?

Alex Snow: I have ridden a 2016 Yamaha before I went in for surgery on my shoulder and I loved it. They have made some massive improvements since I last ride a yam back in New Zealand in 2012. I was very impressed with the bike considering it was straight it the crate. As for the races bikes, I can’t wait to test them in the coming weeks.

Gatedrop: Will you ride the British championship next year?

Alex Snow: Yes, we will.

Gatedrop: What’s your thoughts on the MXGP calendar for next year? You must be excited for the fly away GP’s and see the other side of the world?

Alex Snow: Yeah, I can’t wait for the first 3 fly aways! I’m excited about it all to be honest, I love racing in different country’s and ridding different tracks.

Gatedrop: The quality in MXGP is very high and could be even higher for the 2016 season, have you got any expectations or a target for the season?

Alex Snow: MXGP is very strong. My goal is to score points at every GP and go from there, I think that’s realistic.

Gatedrop: Do you know what races you will compete at before Qatar yet?

Alex Snow: We will race the Italian championship first which is over 3 rounds through Feb I believe.