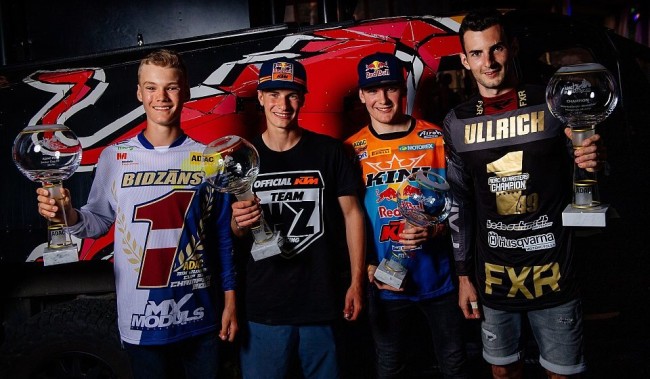 In Holzgerlingen, 10,000 spectators celebrated the new champions in the four classes of the ADAC MX Masters at the final round of the series in Holzgerlingen. In sunny early autumn weather and a perfectly groomed track, there were exciting races in the final round of the seven championship rounds. Dennis Ullrich (Bodo Schmidt Motorsport / Husqvarna) had the title in the ADAC MX Masters class certainly before the first race was started because both competitors, who still had a chance of the title didn’t come to Holzgerlingen ,

“Of course it was weird when I learned on Friday afternoon that Jens Getteman could not drive due to an injury and Tanel Leok was spotted in the paddock of the motocross world championships in China,” explained Ullrich the moment he realized that his fifth title could not be taken away from him. “Of course I wanted to show what I can do on my home track in Holzgerlingen, my start was not bad, then I let it take a few laps slowly, after a few minutes I had a good rhythm, started my attack and was right After that, I drove my own race and was able to secure the victory, I just enjoyed the race and showed myself to my fans. ” In the second race, there was still second place behind. “I did not want to take too much risk and I am very happy about the title,” said the five-time champion after the finish. “Last year, some people had already written me off, but with this fifth title, I’ve pretty clearly demonstrated that I can still do it.”

Pascal Rauchenecker (Classic Oil / SHR Motorsports / KTM) made a point by taking pole position on Saturday. But that should not be all, because the Austrians had by the absence of Getteman and Leok still the chance for the vice-title. And this used the Austrians, even if he himself had not really believed it. “I knew, of course, that it is possible mathematically, but that I could get here in Holzgerlingen 45 points, seemed to me hardly realistic,” admitted Rauchenecker grinning. “When I got off to a good start in the first race and finished second, I really wanted to finish this race to keep the chance alive.” Rauchenecker gave everything and brought the second place to the finish. In the second race it should be even better.” I took the holeshot for the first time ever at the ADAC MX Masters, “the 26-year-old wondered.” Then of course I gave everything I had and was actually able to win. Pure madness! “Tanel Leok (A1M Husqvarna) slipped to third place in the overall standings thanks to Pascal Rauchenecker’s victory, and Jens Getteman also lost one place in the standings and ended the season in fourth place.

Third in the daily standings was Tom Koch (KTM Sarholz Racing Team), who was also able to secure fifth place in the overall standings with two points ahead of his brother Tim (KTM Sarholz Racing). Honestly, it was not important to me that I landed in front of my brother, I would have given Tim fifth place in the overall standings, “smirked Koch. “It was just nice that I was able to finish on the podium here at the last race.” In the first race, Valentin Guillod (KMP-Honda-Racing) finished third. The second race, however, the Swiss race came to an end early after a fall. Lukas Neurauter (KTM Sarholz Racing) also managed to reach the podium with a very brave fight and third place in the second race. “A successful end to the season!

The starting position in the ADAC MX Youngster Cup was extremely exciting, as Jeremy Sydow (DIGA-Procross Husqvarna) had only nine points ahead of his closest rival Rene Hofer (KTM Junior Racing) before the final round in Holzgerlingen. With the pole position on Saturday Sydow gave his title ambition once again emphatically and put on Sunday in the first run still strong after. Born in Chemnitz, he drove full speed through the first corner after the start and led the field into the first lap. However, not long, because in the upper part of the line Sydow caught a rut so bad that the chain jumped off and damaged the engine case – after only half a lap.

Hofer also had a good start, was just behind Sydow and took advantage with a safe victory. Thus, the nine points behind the Austrians had turned into a comfortable lead of 16 points. The highly exciting duel of the two leaders had to be decided in the very last race of the season. Sydow won the start again and did not miss the win, but Hofer finished third to secure the title. “I did not have the best start and just tried to stay calm”, Hofer reported about the nervously stressful drive to the title. “Honestly, I barely dared to do more than half throttle, of course, each of us would have wished we’re fighting each other for the title on the track, but you can not always choose. I think Jeremy and I have had a great season and will probably race together more often in the future. “

Understandably, Sydow was not happy about his race win, too disappointed with the lost title. “Of course I imagined the finale differently,” said the vice champion. “After the first race, of course, I knew that the title was almost lost, we had a great season and I think Rene deserves the title too – congratulations to him!” Second was Michael Sandner (Thermotec Racing KTM Team by Mefo Sport). The Austrian already had the fastest lap time on Saturday and twice brought home second place on Sunday. “I had a good weekend here in Holzgerlingen”, Sandner was happy. “My week before was not good at all, because on Friday my grandfather died.

Due to the injury-related cancellation of Mike Gwerder (KINI KTM Junior Pro Team) Simon Längenfelder (WZ-Racing / KTM) was already determined as champion before the final in Holzgerlingen. Längenfelder, which is sponsored by the ADAC Sports Foundation, therefore did not back off its commitment. “That was of course a great pity for Mike, I would have preferred to win the title on the track, but in racing you can not choose something like this,” described the new master of the situation. “I came into the race fully motivated, got off to a great start and celebrated the title with a win, and I had a fantastic season to thank for all the people who participated in the title.

Behind Längenfelder the battle between Camden McLellan (Kosak Racing Team / KTM) and Liam Everts (Team KTM Liamski) raged for third place overall. Everts, the son of ten-times world champion Stefan Everts, presented himself with great determination, and he was not disturbed by a meager start in the first round, finishing second in both races. In the overall standings, the Belgian still had to settle for fourth place behind McLellan. The South African ranged in Holzgerlingen day rank five to defend the third place in the annual standings.

Strong performance also from Nico Greutmann (Michelin tire factories MH Racing / Husqvarna), who was able to reach the podium for the first time this year. “I got off to a good start and was able to ride behind Simon Längenfelder for a while, with a small advantage over which I could benefit right to the finish line,” said Merishausener, who was happy about the third place overall.

In the ADAC MX Junior Cup 85 the decision in the championship had already been decided on Saturday afternoon. Edvards Bidzans (WZ-Racing / Husqvarna) secured the title prematurely with his eighth win of the season and was delighted to win the championship title in the prestigious junior series. “I had a comfortable cushion with 40 points advantage”, grinned the 14-year-old at the finish. “That’s why I was not too excited in the race, but of course it was a relief that I was able to do the job on Saturday, so I was able to ride completely free on Sunday and really enjoy the race.”