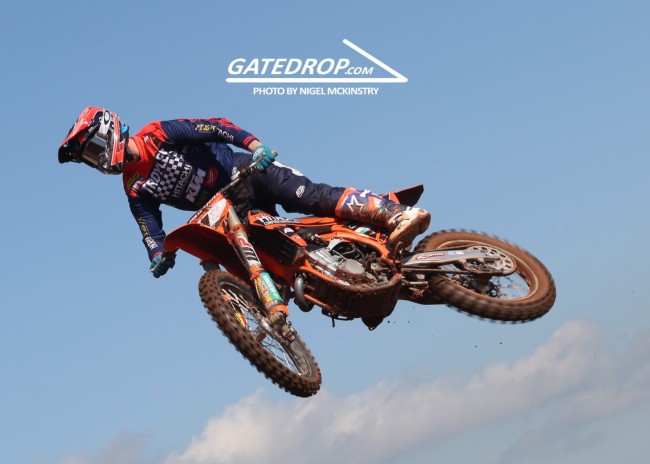 Graeme Irwin didn’t make it easy on himself at Desertmartin!

The British champ started behind his main title rivals in race one and was pretty much last around the first turn in race two, meaning Irwin had his work cut out for himself in front of the home crowd.

In race one he had the patriotic fans running from side to side as he caught but couldn’t quite find a way past Searle for the win, and in race two he was right on Bobryshev’s back wheel on the last lap but just couldn’t make the pass for third.

Second overall (2-4) was still an impressive result under the circumstances but Irwin desperately wanted to win in front of what was a big home crowd under some sensational sunshine at Desertmartin.

We caught up with Graeme as he signed autographs and gave some gear away to his young fans after the race to get his take on an eventful day at his home round.

It was hard work for you today but second overall is pretty good considering you had to come from behind in each moto!

With the heat and stuff today, once I found a rhythm I knew I could go, what can I say? Even that last race I felt I had third and a backmarker got in the way, I had a line (to pass Bobryshev).

That second moto you banged bars out of the gate and again down the start stright and nearly went down, you were nearly last into the first turn you must have been pretty pissed off by at that point!

It was unbelievable, I think was last going round the first corner – I was so pissed! But second overall I can’t complain but I wanted more, I really wanted more, I wanted to win here. The first race wasn’t so bad I was like, okay I just need a good start, then I fluffed the start and you know how frustrating that is!

Overall you gained a couple of points in the championship leader, Jake Nicholls and you had a good battle with him in that second moto once you passed him, he wasn’t letting you go for a while!

That’s it, Jake had a few better lines than me but I didn’t have a good rhythm either and once I fell into a better rhythm you could see the gap (grow). It’s still frustrating, you know it’s coming (overall win) but we just have to keep going.

How did it feel to be ride with the number one plate in front of a massive home crowd – it’s what dreams are made of for a kid from here!

100%! The only thing that makes it better is standing on the top step, last year we had an amazing day here qualifying first and going 1-1. Today we were jut a little bit short, it wasn’t a repeat.

The crowd, I have never seen it like that, it was so cool. Even the back section was lit up, and when I was coming out of the canyon, everyone was going mad and I was like, “I’m trying!”

You kept your cool with all the support you were never flustered and very calculated with your riding.

I really feel that my riding was better than my results today but same thing, you have to be happy with where we are and we took three or four points back in the championship.

And you aren’t riding the two GPs in Indonesia?

No, we aren’t doing the overseas. We have to stay focused and get ready for the next British at Duns.