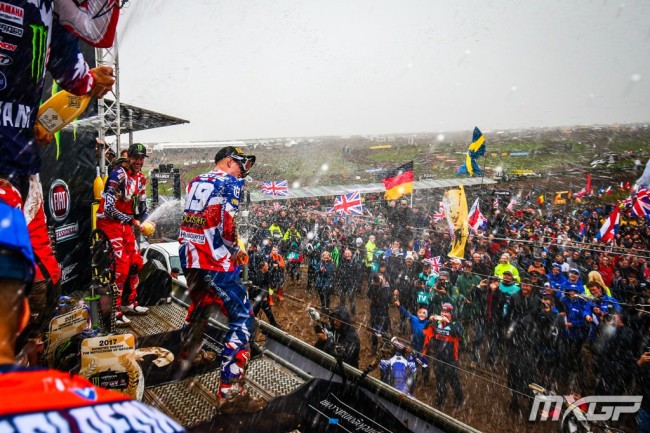 Andy McKinstry: Anticipation is building for the Motocross Des Nations heading to RedBud this year, so who do I think will win? Here goes…

In the MXGP class it’s looking like a showdown between Eli Tomac and Jeffrey Herlings although the two underdogs have to be Ken Roczen and Antonio Cairoli. It’s a tough one and I do think people are forgetting just how fast Tomac is in his home country but I’ll give Herlings the edge to win the MXGP class.

In the MX2 class, it’s perhaps the most difficult to predict because there’s four potential winners in the form of Jorge Prado, Aaron Plessinger, Dylan Ferrandis and Hunter Lawrence. When it comes to the MX2 riders the start is going to be key and Jorge Prado’s starts are unbelievable, whilst I do think Plessinger might be quicker in RedBud than the MX2 World Champ I think Prado might just do the business in America due to his starts. Ferrandis’ starts in USA this year just haven’t been good enough so I think that’ll cost him but speed won’t be the issue with regards to the French rider. Last year Lawrence rode brilliant at the Nations and won, with the Geico Honda at his disposal this weekend he might just be the real dark horse to win – it honestly wouldn’t surprise me but I’ll back the MX2 World Champ instead.

With regards to the open class, I can’t really see anyone stopping Justin Barcia. The American ended up third overall at the RedBud National this year and showed really good speed there. The only rider I see possibility stopping him is Max Anstie if he can bring his A game and if it does rain then that might just help the Brit.

When it comes down to the Nations I see it being between the Netherlands and the Americans. I just can’t see the American’s losing in their home soil so I think this will be the year they reclaim Nations victory.

Jonathan McCready: The MXoN is such a unique event that always brings so many questions and surprises and with rain and thunderstorms predicted for this weekend, anything could happen!

In MXGP Tomac will be revved up to beat Herlings but I don’t thing Roczen and Cairoli will be far away either. If Eli is going to beat Herlings straight up anywhere it might be at Red Bud, but if they both get the starts I think Herlings might just edge it, but it won’t be easy and Tomac could easily be the man on top with home country advantage.

In MX2 I think Prado could surprise America, especially if it isn’t too wet. The kid is the real deal with superb technique and speed but the US media just don’t seem to impressed with him yet despite being world champ at 17, if it’s dry I think he will win, but Plessinger is superb in the wet and ruts and if the rains come he will be very tough to beat IF he gets the starts, which against Prado could be a problem!

I also think Hunter Lawrence will be right there and he also always seems to go well in the rain as will Ferrandis but the Frenchman starts might let him down as they did in the Nationals this year. When you add in the likes of Calvin Vlaanderen and Ben Watson it should be a fascinating class to watch on Saturday and as they battle for individual victory against each other and the 450s on Sunday.

I think the open class might come down to Barcia v Anstie. Max had a brilliant 1-1 last year in the rain, he knows Red Bud and has been riding very well lately. If anyone is going to give Barcia fits it should be Max but Barcia is a great starter and that might give him the edge. Jeremy Van Horebeek should be a sold contender as well as should Jeremy Seewer and Glenn Coldenhoff, and if they are on-form a class win isn’t out of the question.

As far as the team event goes I can’t see the USA losing again. The home country advantage aligned with the huge advantage of rider choice they have over other much smaller countries surely will count for something this year. But I think Holland could push them very close and I’m going for the Brits to make the podium again, with all three very capable at this track and very motivated.