Gajser on a tricky Turkish GP 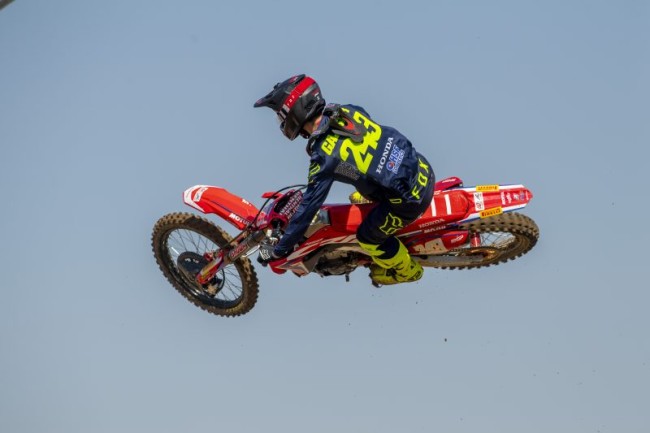 Team HRC’s Tim Gajser wasn’t quite able to maintain his podium streak at the Turkish GP after a couple of mistakes cost him the chance of battling at the front of the field. Teammate Brian Bogers also wasn’t able to capitalise on two good starts, narrowly missing out on 10th overall by just two points.

In both races, the two Honda CRF450RWs were at the sharp end of the field, with Gajser and Bogers both getting good jumps out of the gate and rounding the first few turns inside the top five. However just as Gajser was looking to put pressure on the leaders, he made a mistake in both races which meant that he lost touch and was instead battling for the podium spots. In race one, he dropped all the way to 14th spot on an Afyonkarahisar track that was difficult to pass on, but he fought his way through to sixth place by the time the chequered flag was waved. Knowing that he’d have to perform really well to get on the podium, he rounded the first lap in third place, just a couple of seconds off the lead. Learning the lines of those in front, he was poised to make a move, when a small tip-over cost him time and a couple of spots. He did eventually make his way back to third but his six-three scores were a couple of points short of third place on the podium. Despite the disappointment, he did still climb the steps to receive the golden plate once again that marks his achievement of winning the 2019 world motocross championship.

For Bogers, he spent almost half of both MXGP motos inside the top five, running good laptimes and holding his own in this competitive class. Unfortunately as the races wore on, he slipped down the field with the hot temperatures playing a part as he ended up with 13-11 results. While the end results weren’t what he was hoping, it was definitely a positive sight to see the #189 showing top five speed for a good portion of the racing.

The riders now get to head home for a couple of days before getting on a flight to Shanghai, China which is where the final round of the MXGP championship will take place on September 14-15.

Tim Gajser 243
It was a tough weekend, but yesterday I felt okay. My speed was good, I just had that crash in the qualification race which meant I wasn’t completely 100% today. I got a good start in the first race, but crashed in the wave section and managed to climb back to sixth place after remounting in around 15th. I still knew I could better and I wanted to prove that in race two and again I got a good start, in the top three where again I felt I could I run with the leaders. However I made a small mistake in a corner, tipped over and dropped to fifth. By the time I got back to third they were gone so that’s where I finished. I am disappointed but I will try to take some positive things from this GP and do better next weekend in China. A big thanks to the whole team for their work again and helping me feel comfortable out on the track, and thanks for all the birthday wishes from everyone.

Brian Bogers 189
There were both positives and negatives from today’s racing. I’m quite happy with my speed and I got two good starts which allowed me to race for 15-20 minutes with the top five guys. That is definitely something I’m happy with and it felt good when I was out there. Unfortunately the negative thing is the conditioning because it is still not on the level that it needs to be on and I wasn’t able to stay in the top five. I think when it gets like this, I am still feeling the effects of missing the whole 2018 campaign because to lose all that time off the bike in my rookie 450 season is quite a big loss. I now that is something I can work on though and I do think it is improving all the time so that is something I will continue to work on. However I will definitely take the positive things into China and hope to get two more good starts because that really was a good feeling.

Calvin Vlaanderen 10
It feels like the start of the year, when I was close to getting on the podium at the first three rounds of the season. To miss out by such a small margin is very disappointing but sometimes that is how it goes. My speed was good all weekend and I showed that with a clear track that I was one of the fastest guys, I just couldn’t make the passes when I needed to and that is what cost me my podium shot. Now I head to China determined not to let this happen again, and looking to round out the season on a good note.

Marcus Pereira de Freitas
HRC General Manager – MXGP
Weekend’s like this prove just how impressive Tim’s seven-round win streak earlier in the season was, because it is so easy not to win races and GPs. Just two small mistakes cost him that opportunity and that is just how motocross can be sometimes. Tim is obviously disappointed that it happened but it really does highlight how well he has ridden in the rest of this championship winning season and we’re sure he can bounce back in China. It was also great to see Brian up the front of the field in the first half of both races. He got two good starts and rode with a fast pace and hopefully that will give him confidence for the final round in China next weekend.

With four riders separated by just two points, the MX2 class proved once again how competitive it is, but it was a real shame to see Calvin miss out. His first moto performance was really positive, coming through the field well and making the passes when he needed too. Unfortunately he couldn’t do the same thing in the second race when the track was a bit more one-lined and that meant he finished sixth. Still, he doesn’t have long to bounce back and we are sure that he’ll do well at the last round in China.