Frustration for Geerts and Watson in Portugal 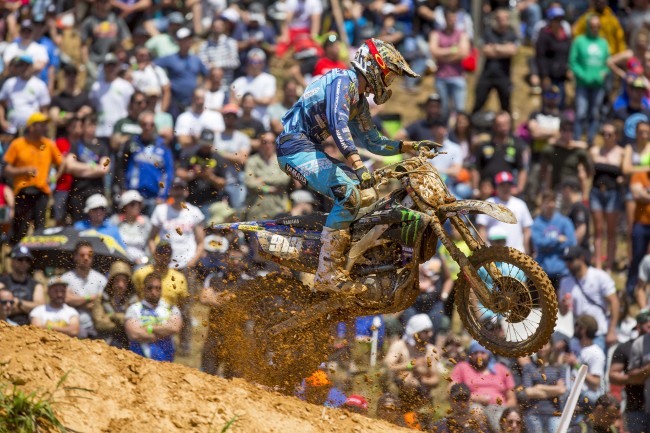 The qualifying race on Saturday didn’t go as planned for the Monster Energy Kemea Yamaha riders. Watson crashed on the first lap and had to fight back from almost last. Not easy on the red clay surface, with only one good line. The Brit finally finished 20th. Geerts, who was suffering from a sore throat, rode an anonymous race, finishing 11th.

GEERTS THIRD
Despite their poor positions at the gate, the Kemea Yamaha boys started pretty well in the first race. Watson was 9th in the first corner, Geerts 12th. While the Belgian teenager moved up a few positions in the opening lap, his British team mate had deja vu. Watson went down on a wet spot in the first lap and had to start all over again.

Geerts was already riding in 7th position after one lap and slowly closed the gap on the guys in front of him. The teenager had a good pace, didn’t make any mistakes and moved up to 4th place. In the final lap Jacobi crashed, which allowed Geerts – who was under a lot of pressure from Evans – to finish third. Watson crossed the line in 18th position.

BAD LUCK
The second race couldn’t start worse for the Monster Energy Kemea Yamaha MX2 Team. Geerts got a knock from Olsen at the start and was almost last. After changing his goggles Geerts started his catch-up race, but was stopped by a crash in front of him. The teenager couldn’t avoid the fallen rider and was forced to withdraw. Same story with Watson. The Brit couldn’t avoid a startcrash in front of him and had to start all over again. Watson fought hard and managed to finish 14th.

Despite his DNF Geerts is still fourth in the world championship classification, Watson dropped from 5th tot 7th place.

“A frustrating day. I was a bit ill, but still had a good feeling on the bike. My first race was pretty good. I kept calm and managed to go from 7th to 3rd place. But the start of the second race ruined everything. Olsen suddenly came from the inside to the outside and gave me a big knock. Even my goggles were broken. I was almost dead last and had to change goggles. I started my catch-up race and had a good rhythm, until Vaessen crashed in front of me. I couldn’t avoid him. Game over. Frustrating, because it wasn’t my fault.”

“A terrible weekend. Almost the same as last week. It started with a bad result in the qualifying race. I knew I was facing a difficult job. Yet, I got a good start in the first race, but I went down on a wet spot in the first lap. It was very difficult to gain positions on this track. Same story in the second race. Beaton crashed in front of me, I couldn’t avoid him and was almost last. 18 and 14 in the races. That’s really bad. I don’t know what’s going on. This year I’m working harder than ever, but the results are going the opposite way. Bizarre.”

“A miserable weekend for our team. We could have come closer to the third place in the championship, instead the gap got bigger. Watson is goingthrough a difficult period. We already spoke a lot about it, but it’s not easy to find a solution. He just needs one good result to get into the right flow. Let’s hope that result will come soon. Geerts’ first race was the only highlight for us this weekend. He rode very smart. Unfortunately, he got a big knock from Olsen at the start of the second race. That ruined everything. Anyway, we will keep on fighting for the third place in the championship.”