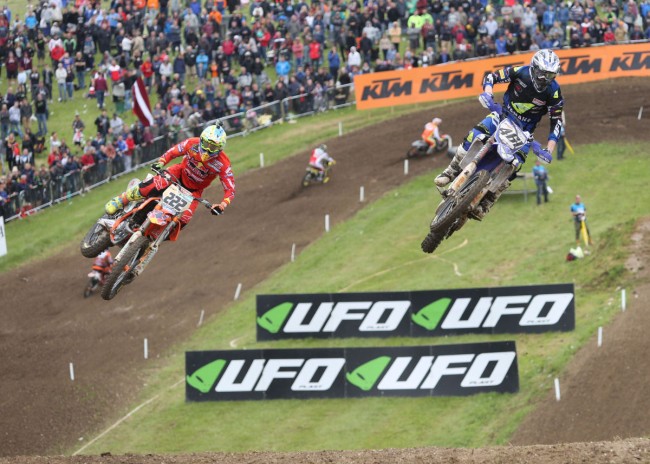 VILLARS SOUS ECOT (France), 27 May 2015 – While we are reasonably familiar with most of the tracks on the MXGP calendar, this weekend the eighth round of the FIM Motocross World Championship will take place in the fresh-ish location of Villars sous Ecot, France. The reason we say ‘ish’ in the previous sentence is because although we haven’t stopped at Villars sous Ecot in a long time, it has in fact hosted three rounds of the FIM Motocross World Championship in the past.

The first time Villars sous Ecot let the best motocross riders in the world loose on their clay based, typical French style, tight and compact circuit, was back in 1982 where Belgian André Malherbe was the victor on that day. Four years later, 1986, the world championship returned with French hero Jacky Vimond taking the honors. A further twelve years on, in 1998, the FIM 250cc Motocross World Championship returned for the last time where the legend Stefan Everts won.

The French are some of the most passionate dirt bike fans in the world. They always create an incredible atmosphere, which will only be amplified this year with their country carrying the coveted Chamberlain Cup as the winners of the 2014 Monster Energy FIM Motocross of Nations.

Also adding to the buzz, the fourth round of the FIM Women’s Motocross World Championship will take place, which is headed by one of the most popular and talented female riders in the world, Frances own Livia Lancelot. Moreover, the fifth round of the European Championship EMX125 will take place where young French star on the rise Kemea Yamaha Yamalube’s Maxime Renaux currently sits second five points shy of KTM Factory Juniors Jorge Prado.

This is the part of the year where the eight times FIM Motocross World Champion Red Bull KTM Factory Racing’s Antonio Cairoli starts gaining momentum. TC222 has already got the ball rolling with two grand prix wins after his switch from the 350SX-F to the 450SX-F and is slowly chipping away at the championship points lead.

A podium finish is more than likely not going to be enough for Rockstar Energy Suzuki World MXGP’s Clement Desalle this weekend with the Belgian getting seriously itchy over not having had a grand prix win since MXGP of Germany in 2014. If the MX Panda can top the box this weekend, depending on where Nagl finishes, there is a good chance he could also take the red plate.

As the rider who has led the most laps and had the most race wins, Red Bull IceOne Husqvarna Factory Racing’s Max Nagl will carry the red plate this weekend. The German is currently four points clear of Clement Desalle and will be looking to retain the championship lead.

Surprisingly, the fastest Frenchman of 2015 is the Yamaha Factory Racing Yamalube rookie Romain Febvre. Romain is one rider everyone should get really excited about, he only turned 23 on the 31st of December which makes him the youngest in the class and after nailing his first race win last weekend and with already two podium finishes to his name, it is safe to say the number 461 has a really bright future.

Team HRC’s Gautier Paulin is sure to have an army of die-hard GP21 fans in behind him as he tackles his home grand prix. Hopefully this will give him the push he needs to be challenging for the lead. Meanwhile fellow countrymen Wilvo Forkrent KTM’s Steven Frossard and Monster Energy Kawasaki Racing Team’s fill-in Xavier Boog could use some of the crowd’s energy, as could 24MX Honda Racing’s Christophe Charlier who actually won a round of the European Championship EMX250 here in Villars sous Ecot back in 2009.

We can’t get over how amazing it is to see ripples in the MX2 statistics. While Red Bull KTM Factory Racing’s Jeffrey Herlings has been by far the most dominating force in the class with 148 laps led versus Monster Energy Kawasaki Racing Team’s Dylan Ferrandis, who sits second on the ‘Laps led’ chart with 36, The Bullet has not had it all his way.

Back in April at MXGP of Trentino, Honda Gariboldi’s Tim Gajser took a race and grand prix win over the flying Dutchman. While that was impressive, one of the most memorable races of the season is going to be MX2 race two from the MXGP of Great Britain where Standing Construct Yamaha Yamalube’s Valentin Guillod proved JH84 can be beaten straight up.

This weekend, Guillod should have a good fan base. If he takes the overall again, he will then have the most consecutive grand prix wins in MX2 for 2015.