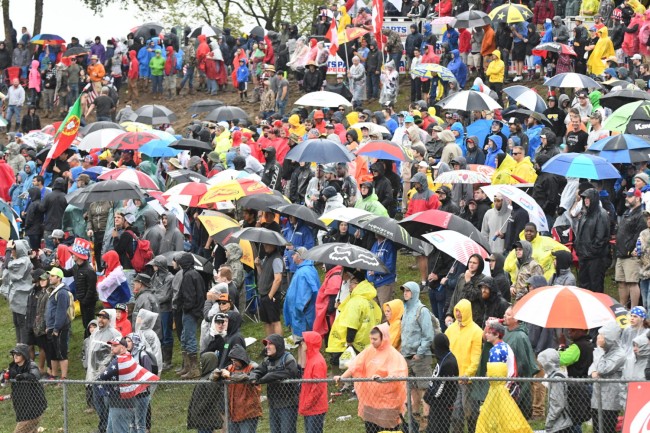 The speed Coldenhoff showed during the MXGP and Open moto was pretty incredible, he even kept the fastest rider in the world, Jeffrey Herlings behind him. The Dutch rider will now head into the off season feeling on top of the world, if he can keep riding like that over winter he could come out swinging in 2019 on his Standing Construct KTM.

The best Motocross riders race MXGP: The best motocross riders in the world race MXGP and the results at the Motocross Des Nations prove it. Sure, if Herlings had have went 1-1 and Tomac managed to go 2-2 or something like that then you could just say Herlings is on another level. However, it wasn’t just Herlings that proved how fast the MXGP riders are.

Alessandro Lupino who finished thirteenth in the MXGP World Championship this year and on a non-factory bike beat Eli Tomac who’s the AMA National Champ. Also, Tommy Searle had the American covered before his bike expired in the first moto, the Brit is usually a 10-15 place guy in MXGP. There’s no doubt the best Motocross riders race MXGP and American’s have work to do. If the American’s thought RedBud was tough, well it’s only going to be even harder at Assen next year! Let’s hope they send their best riders though as it always makes the event much better when they come.

The French: The French federation are very smug right now and rightly so. They were heavily criticised for selecting Romain Febvre and Gautier Paulin ahead of Marvin Musquin. However, after Febvre got injured they did phone Musquin but he declined. The RedBull KTM rider had the opportunity to repair the damaged relationship between the federation and himself but said no – don’t be surprised to see him never getting selected again for the event.

Jordi Tixier ended up getting the call to represent his country and all things considering he was pretty good. He played his part at the event and the French ended up winning for the fifth consecutive time.

What tends to happen with regards to the MX2 World Championship is that riders in the class don’t get the credit they deserve until they sign with an AMA Championship team and then they get the hype. Marvin Musquin, Ken Roczen and Dylan Ferrandis never got the hype they deserved from the media in America until they signed AMA contracts and history keeps repeating itself. It would be nice for Ben Watson to get a bit more credit considering it was his first Des Nations and he ended up fourth overall. Also, it’s a shame Pauls Jonass and Thomas Kjer Olsen couldn’t ride at the event because they wouldn’t have too far away from the front.

Ken Roczen: Perhaps the disappointment of the weekend was Ken Roczen. The German hasn’t contested the Motocross Des Nations since 2013 but he was in action at RedBud and honestly the event did not go to plan for him. After finishing third in the AMA National championship he had a pretty good season after such a big injury.

In the first moto he was involved in a start corner crash which wasn’t ideal but he could only come back to twenty-fifth. In moto two he did get a good start as he was sat in fourth but he faded to ninth.

Was Roczen even the fastest German in the team at RedBud? I’d say Max Nagl was faster on his TM and the results would also suggest that. There’s no two ways about it though, Roczen will not be happy with his Des Nations performance and the determined German will work harder than ever to get back to his very best in 2019.