Five riders to watch at the Paris supercross 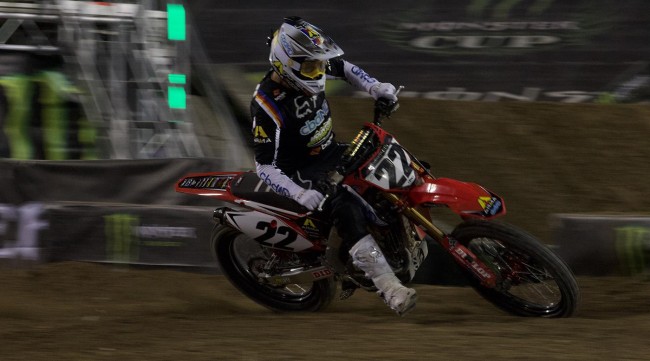 Justin Hill: His first race on the Smartop Honda, Justin Hill has the talent to be an elite supercross rider. His raw speed has never been in question but his fitness and work ethic has. He won’t be riding outdoors next season with his new team so should be all in on supercross until May – can getting on the Honda be the start of the realisation of his potential? Paris might be the first indication.

Chad Reed’s last race in Europe? It appears Chad Reed’s supercross career could be coming to an end. Reed is still looking for a ride for next year and is now riding his own Honda’s with a small crew around him for the pre-season supercross events he has already committed too. Reed still want to be at A1 at least but his a burgeoning passion for racing cars, the Aussie appears close to hanging up his supercross boots. Enjoy seeing him on the track one last time in Europe.

Joey Savatgy on Suzuki: He’s supposed to be singing for JGR Suzuki but with no title sponsor yet the deal has yet to be confirmed. However, despite less than ideal scenario, Savatgy has been practicing on the yellow machine and will be racing a Suzuki in Paris, but will he be as comfortable on yellow as he was on Kawasaki last season?

The home boys: Dylan Ferrandis and Jordi Tixier will the home crowd behind them with Ferrandis, now with an AMA West supercross title to his name, the man everyone will be hoping can take the win ahead of the Americans. Ferrandis impressed before on a 450 and has been putting in the work for his home race on the bigger machine back in California. The aggressive, determined Frenchman is for sure going to bring some excitement over the weekend in Paris!

Darian Sanayei: After racing MX2 Grand Prix motocross for the last couple of years Darian Sanayei is planning on racing supercross in 2020. It means his first pro supercross race will Paris this weekend and will be a great chance for him to show his indoor skills to any potential teams or sponsors still on the look out for a fast rider to support.