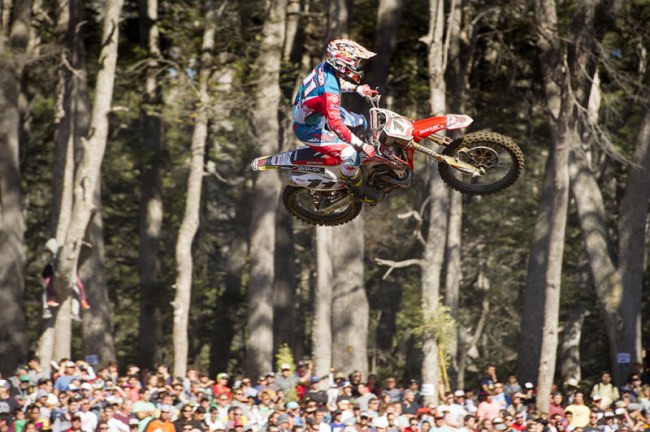 The 2015 season was not only Filip Bengtsson’s first fulltime stint on the MXGP World tour, it was his first complete GP season alltogether. Looking back he collected some good memories and some moments he’d rather forgot about. However the 24MX Honda rider ended the year with a little bonus, claiming two holeshots in his three MXoN races in front of  a massive crowd. We sat down with Fillibang about the MX of Nations and 2015 as a whole.

You’re known as a great starter and finally at the MX of Nations you grabbed some outstanding getaways. That must have been a big thrill?
Bengtsson: “It was amazing to get a great reaction, pin it and take the holeshot in the biggest race of the season! With so many people cheering on and watching all over the world it’s a terrific buzz to cross that line first. I was careful to enter the corner not too enthusiastic but after pulling it off in the qualifying race I knew I could do it again on race day. In the final combined MXGP / Open race it was a close call between me and Ben Townley again, allthough I took the Fox Holeshot award in the end. It was a shame that in the commotion after the moto I forgot to pick up the holeshot cheque but I heard that  they will send so that’s cool!”

With Team Sweden you guys were on the way to a top-10 place going into the final moto. Even with Fredrik Noren not being there, that would have been sweet?
Bengtsson: “Absolutely, top-10 was our goal and we all rode pretty well. After taking the holeshot I didn’t want to let Townley by like on Saturday so I passed him again led for about half a lap. Unfortunately Im ade an off-track excursion early on and that broke my rhythm. By then the track was super gnarly with all the braking bumps and ruts. I felt really tired in my arms, the monkey-arms syndrome you know! For most of the race I was holding on to 15th with Dennis Ullrich pushing behind me. With a couple of laps I made another mistake and that’s how we lost the top-10 in the Nations classification.”

But your riding, on a very technical hard pack track, was good last weekend.
Bengtsson: “The speed was indeed positive. Both on Saturday and in the first race on Sunday I felt good. After a bad start in moto 1 I felt this was one of my best ever races on hard-pack. I finished 8th out of the MXGP riders so for me that’s a solid result. On Saturday I was 8th in the MXGP qualifying race. It’s confirmation that I’m getting stronger in this kind of conditions.”

How do you look back on the season?
Bengtsson: “It’s been a season with ups and downs. I was a bit slow to get going allthough I felt pretty strong physically going into the season. The first overseas  race were a disaster.  The first European GP in Arco di Trento had gone quite well for me but when I had this big crash in Valkenswaard it set me back a lot and that took the wind out of my sails. I suffered a serious concussion which took me a long time to recover. You see how injuries during the season can effect even the fastest guys. For example hen Max Nagl came back he found it hard to reach the level he had earlier in the season.”

For this season you stepped up from the 350 bike to the 450, how was that?
Bengtsson: “It’s been a really interesting experience and I learned a lot. In practice it was never so hard to ride with the bigger bike because it handles so well. When there’s more pressure and you’re in a race situation it was a bit different. You actually need to adapt your riding style, you have to be smoother on the gas and really respect the bike. Especially on hard pack! In the end you have quite a lot more power so you can’t just pin it everywhere.”

In MXGP you got some top-10 results but you were the dominant rider when you raced in Sweden, you were on the podium in international races in Holland and Belgium. The speed was there so what do you need to work on?
Bengtsson: “It’s nice to get good results in international race but in MXGP the field is of course a lot more stacked. Translating that speed into results at the highest level is a lot about experience. How to deal with the pressure, how to deal with set up and preparation but also I struggled quite a lot with the overseas traveling which was new to me. I don’t want to use it as an excuse but I never did a full GP season before, not in MX2 either. So While I went into the season with the experience of 9 GP’s another MXGP rookie like Glenn Coldenhoff had 50 GP’s, that’s five times as much. Most other guys at this level have racked up more than 100 GP’s…”

So where does that leave you for next season?
Bengtsson: “I would definitley like to stay in MXGP but I know this might be difficult. Budgets are tight everywhere, you even see factory teams cutting back from three-rider teams to two guys. That makes things even harder for riders like me. I have some meetings this week and next week so hopefully I will soon know more about my future.”