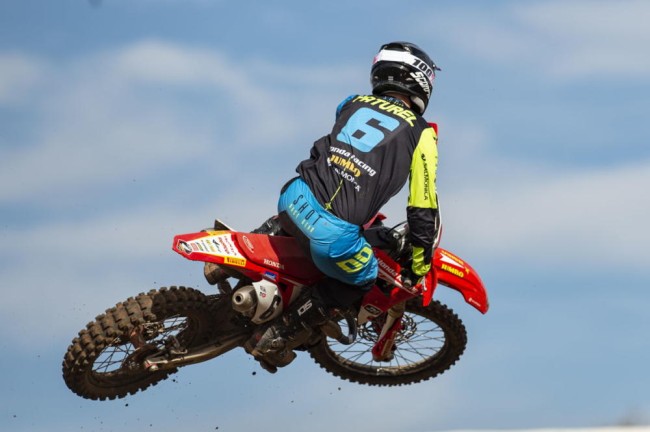 Decrease Font Size Increase Font Size Font size Print Send
Coming into the weekend Paturel was keen to get back to racing. The race organised by Benoit Thevenaz effectively provided the Frenchman with his first gatedrops since early March when the Dutch MXGP round took place in Valkenswaard .With several strong riders lining up on the technical, hard pack course and the good cause behind the event (ed. collecting funds to help the injured riders Killian Auberson and Brian Moreau) Benoit  specifically chose Charity Race X to re-ignite his 2020 racing season. After placing second in qualifying behind Tonus the JM Honda Racing rider left a forceful impression in moto one.

Paturel powered his CRF450R to the holeshot and steadily pulled away from the field to win with a +15 second bonus over Tonus. “The feeling was really good, all day long but the first race couldn’t have gone any better. After starting in front I was able to ride my own race, lead the whole moto and win with a comfortable gap. I was a bit surprised myself that I found my rhythm so easily on an hardpack track because I’ve only been riding in the sand for the last months!”

The second moto gave Benoit a bigger challenge. Sixth out of the gate he remounted to second but passing was tough on the tight course and he ran out of time before he could set up a pass on leader Desprey. “Okay, two wins would have been even better but the main idea was to get a competitive training together with fast riders. I’m also a rider who needs the gatedrops before it gets serious so I’m happy we’ll have Arnhem this weekend and Axel next. The level will be high, both races are in the sand and close to my base in Lommel. All of this makes it the perfect mini-campaign to get to Latvia well prepared when the MXGP World championship starts again on the 9th of August.”

Paturel already participated in the Charity Race X four years ago and was happy to return. “Of course the event happened to have a good timing for me but I’m pleased that I could support their good cause as well. I don’t really know Killian (Auberson) but Brian (Moreau) is someone I know very well because he’s a friend of mine. So that made it even more special and the race had a really nice atmosphere with a good organisation.”

Although Kegums will be a different kind of animal with a much more stacked field and on different soil you can’t help but wonder what the former GP winner is capable of with this kind of form. “I’m really looking forward to the restart of the MXGP season! The team has made a lot of improvements to the bike and I continued to work really hard together with my trainer Joël Roelants. So I know we definitely made progress, I can’t wait to see what we can do in the coming MXGP races,” concludes Benoit.