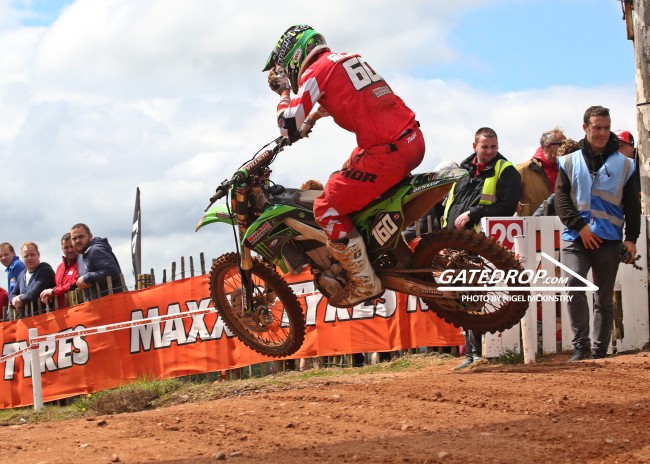 The MRA themselves host the final round of the most exciting motocross Championship in years at the Desertmartin MC Circuit on 19th October, the reserve round after the cancellation of round 4 earlier this year.

Currently leading the Adair Building Services Premier MX1 Class is 2019 Irish Champion Loughbrickland man John Meara on his Kawasaki, second 41 points behind Jason Meara, John’s younger brother, now Phoenix Tools Kawasaki mounted and is considered the best sand rider in Ireland at the moment, so John needs to be on his A game to clinch the double. Jordan McCaw from Ballymoney is now 30 points behind Jason on his KTM, while James Mackrel, Ryan Adair, and Jay McCrum are fighting over the remaining top six positions.

In the Sports Insure Premier MX2 class Ballyclare man Martin Barr has slipped to third place on his Crescent Yamaha and as he will be absent on Saturday due to his stag weekend, Glenoe rider Glenn McCormick on his Unique Fit Out Husqvarna leads Dubliner Jake Sheridan on his KTM by 49 points, so it looks like it’s Glenns to lose, while Dubliner Jordan Keogh and Rhys Graham can both overhaul Barr for third and fourth.
The Norman Watt Motorcycles Semi-Expert/MX1 class is led by 34 points by Aaron Ashton on his Suitor Bros KTM from Donegal youngster Anthony Brown on his similar machine, with Nathan Tannerhill 50, Lurgan man Gareth Knox, and Hillsborough man Stephen McGarry battling for the minor placings.

In the MX2 class Seaforde teenager Conor Mullan has one hand on the medal from neighbour Nathan Green with young Dollingstown Yamaha rider William McBride is third while Aaron McGregor, Jack Moore, Ivan Kerr round out the top six.

For the first time there will be a full Youth supporting programme at the Ulster Championship so there will be plenty of on track action to see
Bikes will be out on the track from 1000am, with the first race to start at 11am. Entry to the event will cost £5 for adults, while children go free and car parking is also free. The track will be signposted from the main Desertmartin to Maghera Rd.