Ferrandis on winning back to back SX titles: Big big dream come true 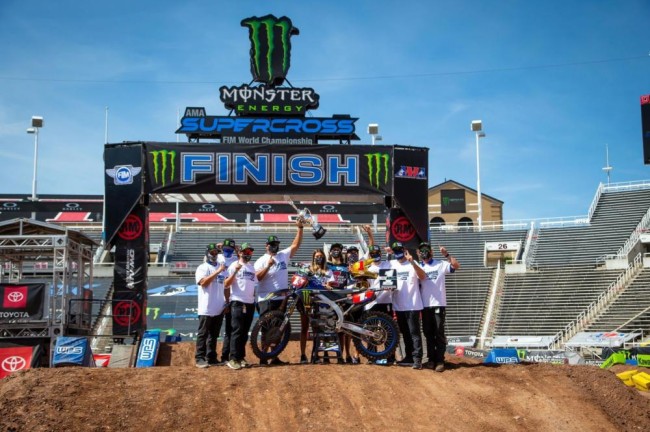 Dylan Ferrandis had never had to go to an LCQ before until his final Supercross race in the 250SX class when disaster struck. The French rider was involved in a first corner pile up and was so far behind that he could only get back to tenth and needed to go to the LCQ. Fortunately, he was able to win that but it still give him a bad gate pick for the main event – not ideal when battling for the championship title.

“When it comes to Supercross, I always said I don’t want to go to an LCQ, it’s not good. I’d never been in one before during four years racing Supercross and the last round going to the LCQ was difficult mentally because you still have to do it but even then you know you have a bad gate. It was really tough, I crashed at the second turn in my heat, I crashed with another rider and got stuck. I just said, okay, let’s regroup and come back, I finished tenth less than one second from ninth. I went back to the truck and fixed the bike to get ready for the LCQ, I got a good start and won it.  I knew that in the main I would have to give everything I had and when I saw Austin down, I knew it was over and that I’d just have to finish the race to win. It’s unfortunate for him but for me a big relief I would say”, Ferrandis stated in the press conference.

When compared his title win last year compared to this year, he feels like this year he was in the position Adam Cianciarulo was in last year. However, both years had the same outcome for the French talent as he won the series back to back.

“I feel like this year I was in the position of Adam last year, that’s exactly what it was and it was tough. I’ve never been in this position before, it was new for me and there was some pressure. I feel like I was confident with myself, physical program, speed and everything. In practice we saw that the lap time was really good and the speed was there. I was more scared about when someone else wants to win so bad, what they will do. I remember back to last year, what I was thinking about doing if I had the chance to beat AC for the title and that’s what scared me a little bit today. Austin was really aggressive with me at the last round and I was a little scared what he could do. Mentally I feel like I made big progress today and for the future it should help me a lot, it was one of the hardest days of my life in racing, it was really hard from the racing point”. 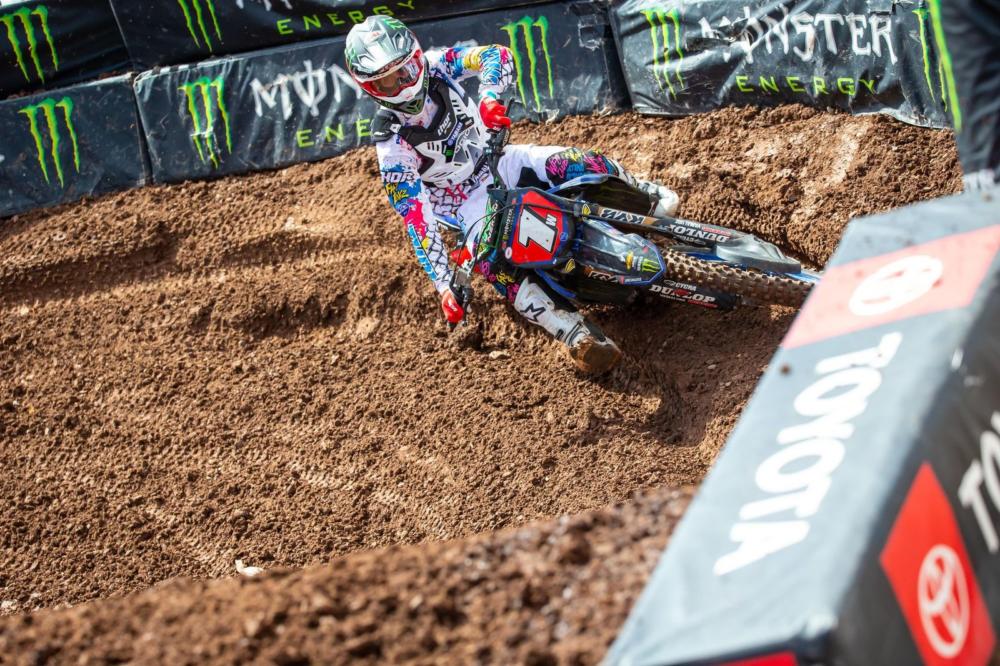 “Just to go to the LCQ, it’s a riders nightmare and you never want to go there. You never know what can happen, it never happened me but did at the last race of the season so it was hard. Emotionally it was difficult because in the LCQ there’s always a chance you won’t qualify if anything happens and you know you’ll have a bad gate pick for the main so it’s hard to manage. But still to win the championship this way was a big relief”.

From the outside, it looked like the French rider stayed cool and calm despite going to the LCQ – he says on the inside he gets sad when he doesn’t win but he tries not to show it because at the end of the day he gets do what he loves for a job.

“Yeah, I act like this because at the end of the day I’m in a good position, I get to race and do what I like. Even if I didn’t win the championship today on the inside I would be mad but you have to stay calm. When I found out I was going to the LCQ, I just said, let’s go for it and see what happens. I tried to be positive because I feel like in the mind it makes a big difference. I try to enjoy and enjoy life. I mean I was looking for this title for sure, last year I was lucky to have it and there’s more to the world. I try to think differently and to not always be sad – every time I don’t win I’m sad but it’s not good for me and the people around me. When I found out there would be no fans, I said well at least no one can boo me (laughs) but I did miss the fans”, added Ferrandis.

Before the red flag Forkner was right at the front with Ferrandis sitting in ninth but the Star Yamaha rider says he felt confident he could do the job regardless of Forkner’s unfortunate crash.

“Honestly, after one or two laps I was pretty confident because I knew I had the speed and physical condition so it was going to be a fun battle and I just wanted to give my best and see. Honestly, what I saw him down I just thought, okay I don’t need to push anymore and I was just cruising in the main for the restart. Before that I saw that Austin was second or third, I was thinking, let’s go and I was ready for that and I planned on giving it everything I had”.

After clinching his second title, Ferrandis showed a lot of emotion on the podium and says it’s because he was born in a small town in France and is living his dream by winning Supercross titles in America.

“I still don’t know why I’m emotional like that, it’s probably because I come from a small town in France and to leave there to be here in the US chasing my dream and to win two back to back championships is just a big big dream come true. That’s why I get emotional and it was a difficult day for me, I had a lot of stuff to manage to get this championship so I was just proud and happy – I let the emotions out”, Ferrandis added.

For the 2021 season, Ferrandis has a new challenge as he’ll move up to the 450cc class but he’s confident he can get good results in the premier class but does acknowledge it’s a big step and he needs to continue working hard.

“The 250cc class is crazy and wild, I feel like it’s the right time for me to move to the 450cc. We will see, I’m getting older also. I think I have what it takes to ride at the front, I don’t know if one day I can win a race but for sure I’m working hard and I will give everything I have to do that. I want to be competitive next year on the 450cc, I hope to have a good winter. I feel like I can do something great when I see AC doing what he did this year, we battled together last year. I’m confident but I know that going up to the 450cc is a big and difficult move so we will see”, concluded Ferrandis.