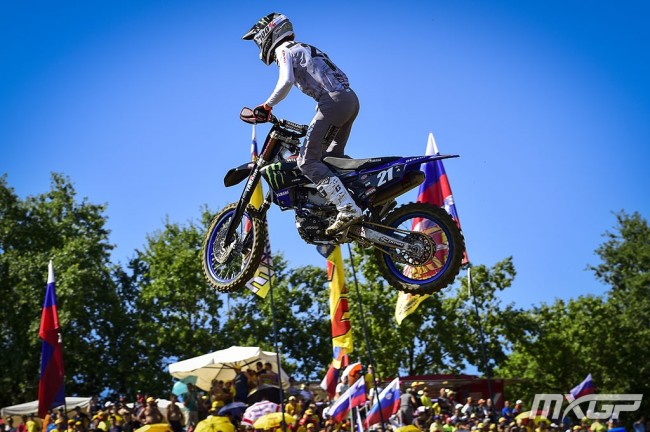 Monster Energy Yamaha Factory MXGP’s Jeremy Seewer celebrated the fifteenth round of the FIM Motocross World Championship from the second step of the podium in Imola, Italy, which was a season best result for the 24-year-old Swiss rider. Monster Energy Wilvo Yamaha MXGP’s Gautier Paulin finished on the same points as the rider in third but was classified fourth in the Grand Prix classification with the better result favoring the best placed rider in the final race.

With an ambient temperature of 35 degree’s Celcius, the Italian Grand Prix was a tough test of both man and machine. In the opening race, the YZ450F mounted riders provided much of the entertainment with all four stars going bar-to-bar for a place inside the top-three. Off the gate, it was Monster Energy Wilvo Yamaha MXGP duo of Arnaud Tonus and Gautier Paulin that led the way around turn one while Monster Energy Yamaha Factory MXGP’s duo of Jeremy Seewer and Romain Febvre made up the top-ten.

Paulin passed his teammate on the opening lap and led for three laps before the eventual race winner Glenn Coldenhoff made a pass stick. Tonus was forced back to eighth after colliding with the newly crowned champion Tim Gajser on Lap-8, while Seewer and Febvre were incredible on their surge up into the top-five.

With 10 minutes left on the clock, Seewer and Febvre found a way past Paulin but moments later Febvre hit a sharp edge on a fast downhill and was thrown spectacularly from his motorcycle.

As a result of Febvre’s misfortune, Paulin and Tonus moved up one position each. At the checkered flag they were 4-seconds adrift of Seewer in third and fourth, while Febvre put in a brave performance to salvage 11th.

In the final race of the weekend, Seewer got off to a much better start as he chased Coldenhoff and Tommy Searle around turn-one. The ’91’ was quick to advance to second position as Paulin, Febvre and Tonus rounded out the top-11.

Misfortune struck when Tonus missed his line on Lap-2 and fell back to 20th as Paulin and Febvre put chase to Pauls Jonass in fourth. After a race-long battle with Jonass, Paulin eventually forced his way up the inside of the Latvian on Lap-14 to steal the position, as Febvre backed off the pace after snagging his radiator on the edge of a deep rut.

Seewer was forced back to third by Gajser on Lap-10 and was in danger of losing the position to Paulin in the final throws. Despite a last-ditch effort to catch Seewer, the ’21’ lost vital time on the final lap when he landed short on the uphill triple. He had to settle for fourth, and fourth overall.

Seewer finished third, which was enough to secure a place on the second step of the podium. Febvre finished sixth for seventh overall, while Tonus fought back to 16th for ninth overall.

Inching closer to wrapping up the 2019 MXGP World Championship as the vice World Champion, Seewer will carry a 41-point advantage over Paulin into the next round which will take place in five-days time, on the weekend of August 26th in Uddevalla, Sweden.

“First of all I want to congratulate Tim Gajser on winning the championship. And for myself, I am happy with how the weekend went. I put in two consistent rides, and made another small step, but it is the consistency that I am most happy about. I am looking forward to the next few GP’s where I will continue to take it race by race and keep the consistency going.”

“I am happy. I changed my training program after Lommel and it has paid off. I am really enjoying riding. In the first moto, I took the lead and was really happy to finish third. I am really happy with my entire crew at Monster Energy Wilvo Yamaha. The way they worked on my bike this weekend made the difference with this track being really sketchy and square edged. The track is also very tight, so to handle the 450cc bike in these conditions is tough, so the bike has to be good. I felt good, but came up short of the podium. But that is how it is, I didn’t have enough today. I would just like to congratulate Tim Gajser on winning the championship. Well earned.”

“I had an up and down weekend. I struggled on the track to find the flow. It kept getting better, I felt much better today than yesterday. I didn’t get the best start in the first race but I came back to third, but I had a big crash downhill and hurt my neck. I felt stiff in the second race, but I could pass some guys, but I touched the radiator and I could not turn really well. My results weren’t where I want them to be, but it is what is. On to the next GP.”

The weekend was ok for me until the last race. I felt good in most of my sessions. I felt like I suited the track. I had a great start in the first race but I was t-boned by Gajser and lost some positions. I managed to fight back to fourth, and then the second one I made a mistake and lost my rhythm completely. I couldn’t come back from the mistake. I am disappointed with how that race went, but it is behind us now. Three rounds remain in the championship and I will do my best.”