Febvre: I feel I have the potential for podium! 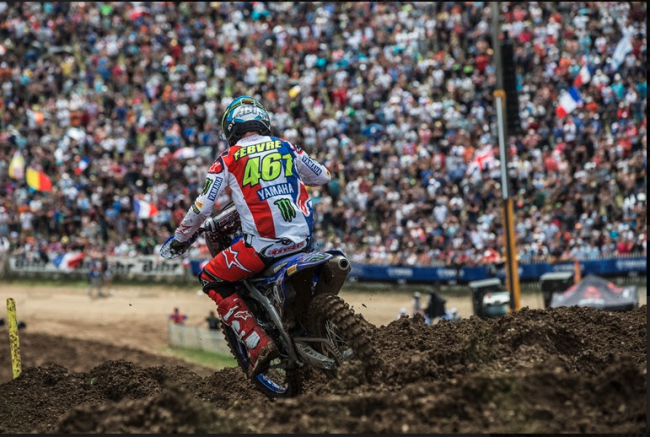 The Monster Energy Yamaha Factory MXGP Team, and the FIM Motocross World Championship heads to Ottobiano, Italy, this weekend for the third of three back-to-back races, and the eleventh stop of twenty on the 2018 MXGP calendar. Romain Febvre is looking forward to racing at the sand-based venue and aims to put his YZ450FM on the podium while Jeremy Van Horebeek hopes for better luck than he has had, and wants to make a strong start to the second half of the season.

MXGP’s arrival into Ottobiano marks the second half of what has already been an eventful season for both Monster Energy Yamaha Factory MXGP riders. Romain Febvre claimed his first podium of the season two-weeks ago in Great Britain and is currently fourth place in the MXGP Championship Standings. Jeremy Van Horebeek remains one of only four MXGP qualifying race winners, but has had an unlucky start to his 2018 MXGP Championship campaign and has suffered from multiple niggling injures. He is currently ninth in the standings, 7-points shy of fellow Yamaha rider, Jeremy Seewer.

Currently eighth in classification, Wilvo Yamaha Official MXGP’s rookie Jeremy Seewer carries good memories into Ottobiano as last years’ MX2 Grand Prix of Lombardia winner. Having grown up just across the border in Switzerland, Seewer hopes his countless laps clocked at the venue will work in favor as he looks for two solid results and a good finish this weekend.

Van Horebeek missed the MXGP of Lombardia last year due to injury, as did Wilvo Yamaha Official MXGP’s Shaun Simpson who was just making a come-back from injury at the Grand Prix, but had his return cut short as the victim of a freakish first-turn incident in the Qualifying Race, which resulted in a broken elbow.

Simpson certainly favors a sand track and will admit that he is stronger in the sand than on any other surface. The likeable Scot is almost back to 100% health and fitness following the injuries he sustained to his hip and ribs in Russia, and has been spending most of his days riding in the sand over the past few weeks, working on finding a winning set-up for the up coming sand rounds.

The first half of the season has been extremely positive for Kemea Yamaha Official MX2’s youngsters Jago Geerts & Ben Watson. Both riders entered the season with a goal of finishing inside the top-ten and have already exceeded expectations with Watson currently occupying fourth-place in the standings, and challenging for a place inside the top-three in the championship, while Geerts is on the fringes of the top five, in sixth. Geerts has also given the team their best race result with a second-place finish in the final moto at the French Grand Prix three days ago. With one podium under his belt, and as the leader of the Open Dutch Championship – the worlds most competitive sand-based national series – the eighteen-year-old rookie would not surprise anyone if he celebrates the eleventh round of the MX2 World Chsmpionship with a bottle of champagne, on the box.

Anthony Rodriguez will complete Kemea’s line-up in MX2 this weekend and will attempt to race despite the pain stemming from a torn ligament in his right ankle.

After a three-week break, the highly competitive Women’s Motocross World Championship will also resume this weekend on Kiara Fontanesi’s home soil. As the most successful female motocross rider in the world, and five-time WMX World Champion, MXFonta Yamaha Official WMX’s Fontanesi hopes to give the thousands of Italian fans that are expected to line the fences in Ottobiano, something to cheer for, as she hopes to break away from fellow YZ250F rider, NoFear Yamaha Official WMX’s Nancy van de Ven. The duo are tied for third, on 118 points.

Meanwhile, the current WMX series leader, Altherm Yamaha Official WMX’s Courtney Duncan will arrive at Ottobiano in hopes of extending her 15-point lead in the championship. There have been six races in the championship thus far, and the twenty-three-year-old New Zealander has won the last five consecutively.

In addition to the MXGP, MX2 and WMX World Championships’ this weekend, the Italian ASTES4-TESAR Yamaha Official EMX250 Team will be waving a green, white and red vertically striped flag for their Italian talent, and proven EMX250 round winner, Nicholas Lapucci as he returns from injury this weekend. Joining Lapucci under the ASTES4-TESAR Yamaha awning at the seventh round of the EMX250 championship this weekend last weekend’s podium star Roan van de Moosdijk, and the teams newest recruit, Caleb Grothues.

Romain Febvre
4th MXGP Championship Standings, 323-points
I am looking forward to going back to Ottobiano this weekend, I feel like it has been a long time since we have had a race in the sand. We have been training in the sand quite a bit over the past few weeks, even in between the hard-pack rounds, so I am looking forward to getting in the sand where I expect to battle for the podium. I feel I have the potential for podium, I just need a good start and be careful not to hurt my foot too much, and I should be ready for the racing on Sunday.

Jeremy Van Horebeek
9th MXGP Championship Standings, 219-points
It is going to be nice to get back in the sand and hopefully turn things around. I have been pretty unlucky with crashes this year, and have quite a strange injury on my wrist where I feel like it’s not getting any better. It’s not bad, I can ride with it, but I just feel it all the time. I am not happy with my results lately, I know I can do much better, so I hope I get good starts this weekend and show what I can do.

Jeremy Seewer
8th MXGP Championship Standings, 226-points
I feel good going into Ottobiano as I won the GP there last year. It was a really tough one as well with the heat and humidity, but still, I am looking forward to it. I used to train there a lot when I was younger and living in Switzerland because this was one of the closest tracks to my house. It will be super tough in the 450cc class this weekend. I hope to carry my momentum from last weekend with good starts and good speed and hopefully we can get another really good result.

Shaun Simpson
17th MXGP Championship Standings, 104-points
I feel like I have been making progress each week. Not just results wise, but in terms of my feeling and getting over the injuries. I feel like my injuries have pretty much healed up 100%. We have just been focusing on riding in the sand and playing to my strengths, and also playing to what we have at hand, which are sand tracks around the Wilvo Yamaha MXGP base and work shop. So I have been riding a lot to try and catch up on the other guys. I think this weekend will suit my strengths. I’m going to give it my all heading into the week break before Indonesia, not a single drop will be left in the tank. Ottobiano is more my style of track, more so the Matterley Basin and France so I hope to be up and inside the top-ten this weekend.