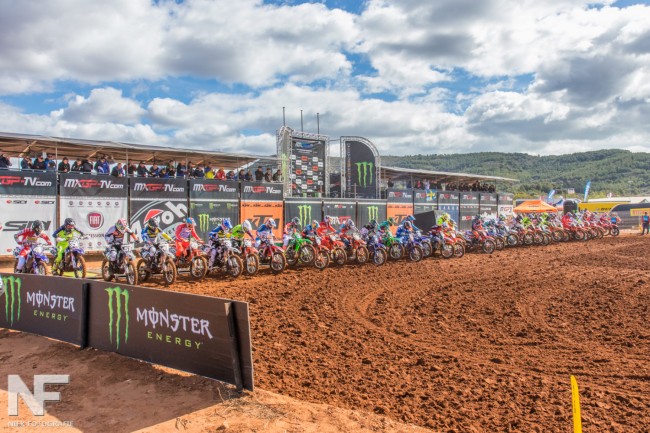 In part one of this feature, we asked some current and ex riders in the paddock what they thought about the U23 EMX250 age rule alongside the existing MX2 age rule, which you can read here in case you missed it.

In part 2 we’ve asked a number of team managers, rider coaches etc.  You can get the thoughts of some highly respected names in the paddock on the matter.

Giacomo Gariboldi (HRC Honda team manager):  Personally I think it’s a great decision because in the EMX250 series sometimes very young riders were facing old riders with much more experience. I hope that in future the MX2 will be open without any age limit, this will make available some places to riders that now cannot find a team in the MXGP class.

Rasmus Jorgensen (Current coach at Rockstar Husqvarna): Honestly, I like the age rule in EMX250. The structure and the stepping stones to reach the MX2 seems to work well. EMX125, to EMX250 and if you do well you get the chance to ride the World Championship and establish a name in MX2 and eventually move up to the main class. I respect all racers on a high level, and understand that it’s frustrating for the older guys that they no longer can compete in the EMX250 class, but there is nothing after that for them, and in my opinion EMX250 is the class to look for young special riders for the teams who has multiple years in MX2.

MX2 rule stay the same is fine with me, I don’t think it would change much anyway. Youthstream wants the main class to be MXGP and only the really good ones will succeed in that class. The system is working in my opinion. Seewer is a good example to come from MX2 without titles but consistent and after one year he is now a factory rider in MXGP. The class is tougher than ever.  If all the riders that is aged out in EMX250 would go for the EMX 2S Championship it could turn out to be nice racing.

Gordon Crockard (Honda Motor Europe Off Road Racing Manager): My own personal opinion, and to be clear that this is not a statement from Honda, I think there should be no age rule for any of the World or European categories.

I think that the timing and method of the announcement could have been given broader thought and consideration by the FIM and Youthstream, I refer in particular to the manufacturers being excluded from any contribution to this decision and also not being formally informed. And when I say manufacturers, I can only speak from Honda’s side, as I cannot confirm if any of the other manufacturers had been formally notified or not. Honda were not consulted. This “announcement” would have been better made in May 2018 at the very latest. Honda’s EMX250 plan for 2019 included some riders who are more than 23 years old. I started building that plan in June 2018. In my opinion, the inclusion of riders in EMX250 exceeding 23 years old is not a negative. It helps to measure the quality of the younger riders by comparison. I also think this for MX2, when the category is open to all age groups, then there is no doubt that the World Champion of MX2 is actually in fact the best, not just the best who is under 23 years old. How would our recent World MX2 Champions feel if they received their FIM Gold medal with a *Under 23* condition engraved next to the World Champion title, and all those team championship T Shirts that are in all the celebration group images, they would need the *Under 23* condition included too.

The 2 stroke 250cc category – EMX2T – is of no value to Honda, Kawasaki, Suzuki. The EMX2T Championship excludes these 3 major manufacturers as they do not make a bike that is suitable to compete in this championship. 3 companies can take part in this championship, KTM/Husqvarna Group, Yamaha and TM. I do not expect to see the Enduro focussed manufacturers coming to Motocross with their 250cc 2 stroke bikes, for example, Beta, Gas Gas, Sherco.

In addition, I think the rule change for EMX250 will direct riders who are over 23 years old, towards racing in their own national championships. I do not think that riders exceeding 23 years old who were intending to compete in EMX250 in 2019, will instead race the EMX2T championship in 2019 and beyond, or will they move up from their EMX250 level of 10 rounds and double that to race in the ultimate premier class MXGP of 20 rounds – 6 of which are overseas.

Harry Nolte (Former MX2 Kawasaki Team Manager): I believe it’s very good, they should have just made the announcement earlier. Maybe for next year they should allow for one year, the 250 four strokes in the new class (EMX 2T) because quite a lot of riders already had a deal for the 2019 season.

Tim Mathys (Standing Construct Team Manager): I think the age limit in MX2 is a good rule. In most mechanical sports there is a pyramid system towards the top class so I think the age rule in MX is necessary to create the desired professional effect. To me it seems logic that in EMX250 there also has to be an age rule, for the same reason. Maybe even a younger age to make it completely logic. The only remark you could make is that it would have been better to introduce the rule now but to let it start in 2020 or 2021. This would have allowed the teams to make the correct planning and not like now having signed riders who are no longer allowed to race in the class.

The introduction of the EMX 2T class is good for the sport.  The more progressive manufacturers have understood that there is a big market for 2T bikes as it creates possibilities for some riders who can’t or want race 4T. The FIM and the promoter do a great job in giving these manufacturers the chance to show their products. The more bikes are sold, the better for the complete MX industry, and the better for our beloved sport in general.

Klaas Hattem (Gebben Van Venrooy Kawasaki Racing Team Manager): Personally, I think it is a good thing to have an age limit for the EMX250. The EMX250 must become and remain a class in which young riders can be prepped for the GP and not serve as a safety net for riders who do not have or cannot to the MXGP. To the increase of quality in the MX2 to ensure they would even further reduce the age limit in the EMX250. Then comes the pyramid system what YS really has in mind to its fullest.

Justin Amian (DIGA-Process Husqvarna Team Manager): I like the structure that Youthsteam wants to follow for the future. I can fully understand the statement from Youthstream and I support them.  But it’s all about the right timing! More than the half of the MXGP paddock are signed for 2019. Budget from the factory’s to the teams are already on paper.  The riders and team dealing starts around June but we are now in October.

I feel sad for riders like Marshal Weltin, Steven Clarke, Mel Pocock, Martin Barr and Simone Furlotti. I don’t know how much stress the teams will have right now to find “fill in” riders – 90% of the “A” priority riders are under contract!

What does YouthStream tell those kind of riders, this is the biggest question. Tell them to race 2 strokes? Sure, all the “too old” MX2 GP riders were in this class, together with the “green horns” that are some of the fastest kids coming up. I believe they should follow the AMA rules and make a points system for the MX2 class.. easy!

For a lot of the younger riders, they will have it much easier to get good results in the EMX250 class. But the quality I think goes down a little bit, this class will miss the experience from the over 23 riders riders. We can all think a lot about it , the results we can discuss in exactly one year.

Daniel Makx (Former Yamaha MX Coordinator):  I gotta hand it to Youthstream and Luongo. It’s undeniable they have been great to our sport in terms of upgrading the MXGP World Championship, bringing more sponsors, a better visibility, upgrading the paddock and professionalizing the sport to the max. Obviously this can’t be made without some sacrifices, and these have been the loss of price money for the riders, for example, or this urge of taking our sport to exotic countries like Thailand, Indonesia or Turkey, but we can’t deny MX has hit popularity records and it will only get better.

Youthstream puts on a hell of a show and only the best riders line up on Sunday morning at the races, so this forces to try and select these riders correctly. There is no doubt that a rider who is 25 years old is not gonna make it in the MX2 class, let alone the MXGP class, if he hasn’t made it through MX2, count Desalle out of this one, so it’s only natural that there is an age limit in the EMX250 class as there is in the MX2 class. EMX250 is the stepping stone to MX2 so there has to be an age limit so that the riders don’t eternalize in that class, if by the age of 23 you haven’t made it, let other riders give a try, we are trying to import the best talents to the big classes, that is the way to go.

Playing these cards, though, I think we should move the age limit in the MX2 class a year forward, maybe 24 would be ok, and rethink the two championships rule, I mean, if you are under 20 and have two WCh, don’t move until you have reached 20, obviously I’m thinking about not losing talents such as Jorge Prado who could possibly leave to the USA in case he clinches 2019 title, give him a year more to get used to it. But that’s it, 20 is the maximum for a guy who is destroying the field such as Prado or Herlings.

In the other hand, not a great fan of the EMX300, an obvious nod to the European brands, I think this class is ok going to the EMX2t (250 2 strokes) and should be a support class for 2stroke die hard fans, but not very interesting, this could end up being a 2stroke euro championship, and maybe the route of a EMX450 class for riders who have reached the age limit would be the way to go for these riders who are let out in the cold.