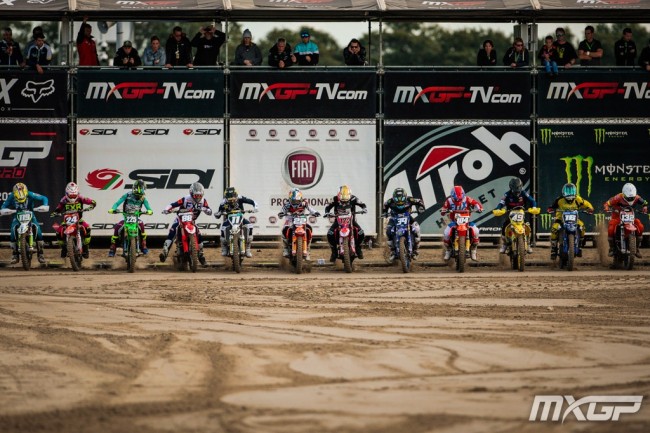 In part one of this feature, we have asked some riders in the GP paddock what they think about the new U23 EMX250 age rule alongside the existing MX2 age rule as well as the new EMX 2t class.

Keep an eye out tomorrow when part two will go online where we talk to some team managers etc about it.

Vsevolod Brylyakov (GP rider): I think this age rule on the EMX250 series is the right decision as this is a good class to perform for the young riders and work towards the dream of being a pro athlete in the MX2 and MXGP classes.

The problem we have now, as I also can feel on my skin, is not having enough places for the riders in the MXGP class.
I know I am definitely and believe that I am good rider and my possibilities in MX2 were obvious, as after last year big injury, after a few rounds I could battle for podiums this year and it’s clear that just due to some bad luck I couldn’t put the things together so I could actually prove and show what I’ve been working for. Now, as I am 23 already I must move up to MXGP, but there’s no places, and I know there are few more athletes struggling with this situation.  I don’t know how it can be solved… it’s really a huge problem for many riders I think.

Pauls Jonass (GP rider): Actually I haven’t thought about it so much. But I think overall it won’t be good for motocross. Because lately many guys who are older than 23 and can’t race in MX2 go race EMX250 but now with this change there won’t be so many riders anymore. I don’t think that so many riders will move to 250 two strokes to race in EMX 2s. The best would be to make the EMX250 series with an age limit and MX2 without.

Jago Geerts (GP rider): “I think the U23 rule in EMX250 is a good decision. But they announced it really late so it’s not good for all the riders that are older than 23 who already have a contract for next year. I would raise the age limit to 25 in MX2 but also no limit would be good. I think for the EMX 2S class there will be no big changes. I think almost the same riders will be competing than in the EMX300 series last year.

Simone Furlotti (GP rider): Like I already said, introducing an age rule now is not fair, I signed a contract like other riders and now I have no idea what to do. An age rule in EMX is okay but then you have to open MX2. The EMX 2t has no future in my eyes.

Adam Sterry (GP rider): In my opinion I don’t mind the age category being in the EMX250 as that is the feeder class for MX2/MXGP however telling everybody this late when people already have deals etc is out of order. If they made this decision it needed to be said midway through the season so teams can organise their riders and budgets with parts, bikes etc and not go through all of this and the rider can’t race.

I think the MX2 class needs the age limit making it to 25 or something or take it away and have a point out system like USA, this gives more time in the MX2 class before having to move on to the MXGP class. This would also help MXGP and good riders not miss out on rides.

The 2 stroke class is cool and another class where people can make a living so I have no problem with that.

Stefan Ekerold (GP rider): The EMX250 age rule is a good thing.
For the EMX 2t class, honestly in my opinion I don’t feel anybody really cares about it. MX2 is not supposed to be a junior world championship. It’s supposed to measure who is the fastest rider in the world on a 250 four stroke. If I am a meter twenty tall and don’t get on with a 450 it kills all my chances of becoming world champion. I feel my opinion on this is real, I have no interest in MX2 anyway as I’m a 450 rider. It just doesn’t make sense to me.

Brian Jorgensen (Ex GP rider): Normally I will say no comment because I have no power anymore. But what I can say is that I think they have to raise the age limit in the MX2 world championship to 25 years old or have no limit at all.

Julien Bill (Ex GP rider): Yeah, for sure I’m okay with the EMX250 rule. That’s normal to let the young guns have a chance. Too many former MX2 GP riders going back to that class is not normal. I would also get the age limit up to 25-26 in the MX2 World Championship. Many riders could have a career if you let them progress on a 250 longer.
Look at guys like James Dobb, Alessio Chiodi or Mickael Maschio, they’ve all been 125cc world champ at 28 years old and above.

Jeff Perrett (Ex GP rider): In principle it’s a good idea, but practically it’s not in it’s current structure. Where do riders like Steven Clarke, Martin Barr and Mel Pocock go now? And that’ll be the same for a load of other quality riders from other countries too. I’m all for the EMX250 age limit being 23 to help nurture the younger riders if those older guys can now go and race in MX1 and pick up a ride, but it’s virtually impossible for them because of this ‘pyramid’ scheme they keep mentioning. It doesn’t make any sense to me to have both the EMX250 and MX2 with a 23 age cap.

Okay, so the standard is high in the MXGP as proven at the MXON but I don’t see why they can’t have more riders racing in the MXGP class and just bring back 40 on the line for MX1 and you can try and qualify through timed training over the weekend. The cream will always rise to the top, that’s why they’re factory riders. The only place for any established rider who is now over 23 and has been racing the EMX250 and wants to continue being part of the GP weekend and race a European championship will be the new EMX 2t championship. Will there be enough support in that for those guys to earn a living like they were in EMX250? And do they even want to race a 2 stroke? Do they even want to race a 450 in MXGP for that matter?

I guess we’ll have to wait and see but right now they’ve effectively been thrown on the scrap heap. Don’t get me wrong I’d love to see some real top riders racing in the EMX 2t championship but it’s a job for these guys and if the support isn’t there for them to earn a living and they can’t get a MXGP ride on a 450 then effectively these guys are going to lose a fair chunk of their livelihood. One flip side is they may decide to race more domestic races, but again, it has to be worth their while and is there enough support from the industry in the UK at the moment to get behind them? Probably not. On a bit of a selfish note, we may now be able to get a few more top British riders to our Steel Hawk summer events racing for the big cash! We’d love to see those guys there!

Mikkel Haarup (EMX rider): That’s a difficult question. I think it’s both good and bad that they put an age limit. I think that it’s great for the younger kids coming up because they will have the opportunity to shine. But at the same time being able to race the older guys gives you an opportuninity to learn and develop. I think it’s great that Youthstream tries it out. I think that they could raise the age limit in MX2 a bit because after all it’s about finding the worlds fastest 250cc rider.

Miro Sihvonen (EMX rider): Well, the only thing I think about it is that if they do this age limit in EMX250 then they should remove it from the MX2 World Championship. I really don’t know what to think about the EMX 2t class, I don’t see it as a step to anywhere.

Rene Hofer (EMX rider): I think, it’s absolutely the right decision to make the U23 rule in EMX250, because it‘s just better for the younger riders to find a team and stuff. Also, the EMX 2Stroke class is a good idea, because everybody can take part in it. For example a former GP rider can still ride the European Championship and it has no affect on the young riders.

For me, it’s okay that there is the U23 limit in MX2 too. I think if the organisers would make it U25, this would be the absolute maximum. If they take away the age rule completely, there would probably be much more riders in MX2 and young riders would have it more difficult again. So this is nonsense.