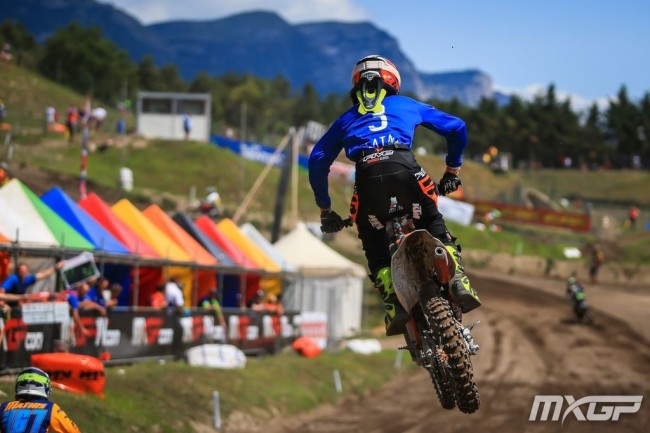 The Junior World Championships took place at Arco di Trento two weekends ago and now the talented youngsters head to Loket to try and win the European title. As the EMX65 and EMX85 finals are ran during the MXGP of Czech Republic, it’s a chance for the younger generation to race during the same weekend as the best Motocross riders in the world.

Coming into Loket with lots of confidence will be young Italian rider, Valerio Lata as he dominated the 85cc World Championship in Arco. He’ll be looking to do the double and he’ll be hard to stop on his Marchetti KTM.

Finishing second overall in Arco was Edvards Bidzans but his starts didn’t help his cause in Italy. If he can get better starts in Loket he might just be the guy to challenge Lata for the European title.

Bidzans in action at the JWC in Arco. Pic: Youthstream

There were two Italian’s on the podium in Arco as Matteo Luigi Russi ended up third in the World. He’s a very neat and consistent rider so will be hoping to get on the podium once again in Loket.

One young rider with a lot of potential is Latvian, Karlis Alberts Reisulis. He missed out on the Dutch Masters title but did go 1-1 in the final round and finished fifth overall in the Junior World championship. He goes into Loket with a lot of momentum and good confidence. He’s a stylish rider to watch as well.

The weekend was a special one for Cas Valk as he clinched the first title of his career, the Dutch Masters 85cc title. Valk edged out Karlis Alberts Reisulis to take the championship. Even though he had a really bad weekend at the World Championship he’s determined to go for the win in Loket. If he rides like he can then he should be at the sharp end.

Another Dutch rider, Ivano van Erp would have been expecting much more from himself at the Junior World Championship as he’s very talented. Motivation certainly won’t be a problem this weekend as he’ll look to show his real level in Czech Republic.

Young French talent, Quentin Marc Prugnieres is highly rated and he rides under the BUD Kawasaki awning. However, he’s pretty big for the 85cc which doesn’t help him out of the gate. He finished fourth overall at the World Championship but has the potential for at least a podium.

Two Belgian brothers who have a lot of talent are Sacha and Lucas Coenen. They expected more from themselves at the Junior World series so will be looking to make amends in the European series this weekend.

There’s two Brit’s to watch out for in the form of Charlie Heyman and Ollie Colmer. Both of them have the potential for top ten results at worst but will use the event to learn as much as possible.

Young Slovenian, Jaka Peklaj finished second in an EMX65 moto last year in Loket but a DNF cost him the chance of going for the overall. Considering this is his first year on the 85cc he did well to qualify and is a rider for the future.

Young Czech talent, Vitezslav Marek is really fast and has bags of talent. The youngster won the world title in Arco and will be hoping to do the double and add the European title this weekend. He’s going to be hard to stop.

Can Marek do the double? Pic: Youthstream

Dutch female sensation, Lotte van Drunen ended up third overall at the Junior World Championship and will be doing everything possible to get another podium this weekend. She might even be the biggest challenger for Marek. Lotte’s brother, Jayson will also be competing at Loket this weekend.

Over in Italy there’s a few young guns breaking through at the moment and Edoardo Martinelli is one to look out for. He finished fifth overall at the Junior world series and has the potential to finish on the podium.

Can Martinelli get on the box in Loket? Pic: Youthstream

Dex Kooiker, who is the younger brother of 125cc rider Dave has been having a solid season and will be eager to perform this weekend.

Salvador Perez from Spain is also a young rider with plenty of potential and one to watch out for.

The sole Brit in the class is Ashton Boughen who would have learnt a lot from the Junior World series after leading the second moto. If he can run at the front this weekend again it’ll be a successful weekend.