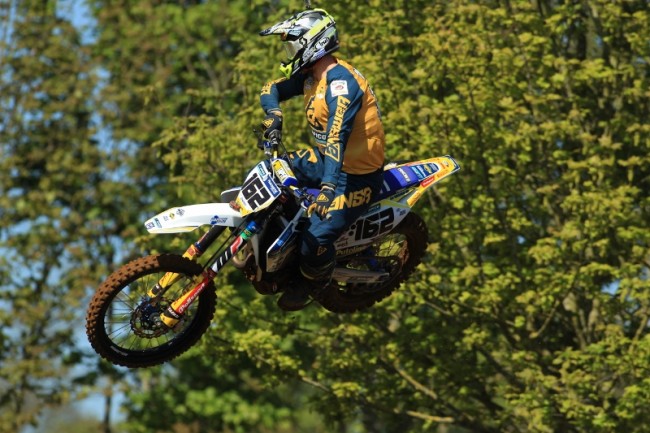 Stuart Edmonds who’s been out all season recently got back on the bike and made his return to racing during the final round of the MX Nationals.

However, the weekend didn’t go to plan for Edmonds as he unfortunately re-broke his right arm again. Edmonds had been looking forward to representing Team Ireland at the Motocross Des Nations yet again in October but due to the injury he’s now been ruled out of the event.

Team manager, Philip Mccullough has already announced that he will be choosing Richard Bird to head to America instead now.

We would like to wish Stuart Edmonds all the best with his recovery and hopefully we can see him back to his best in 2019.

“It is with regret, as Team Manager, I have to inform everyone that Stuart Edmonds had a crash this morning, in practice at the MX Nationals, and unfortunately re-broke his right arm again.
This comes as a massive blow for Stuart who had set his goal to be fit and ride for Team Ireland at Red Bud on October 6th/7th after getting injured back in May.
After speaking to Stuart personally, and feeling his pain and disappointment on the phone, all I could say was, ‘situations like this don’t build character Stuey, they reveal it’
I want to wish Stuart all the best with his recovery and hopefully he will be back again next year to fight for his place on the Team.

On a positive note I want to welcome Richard Bird into Ireland’s MXON Team, this is ‘Dickys’ second time to represent Team Ireland at the highest level.
After clinching, not only the Irish MX1 championship a few weeks back, Richard won all 3 races yesterday at the penultimate round of the Ulster MX1 c,ship at Laurelbank, leaving him with only a few points needed in the final round to secure another domestic title.
Added to this, Richard clinched the MX Nationals MX1 c,ship today after travelling across, from Laurelbank, to the mainland late last night where he scored an impressive 2nd in race 1 and 1st in race 2.
Today’s developments show the importance of me naming both Richard and Jason Meara as my reserve riders back in May.

Everyone involved in Team Ireland want to wish Stuart all the best in his recovery and also welcome Richard Bird into the Team as the MX Open rider on board his KTM 450cc machine”.