Dungey could clinch title at Utah! 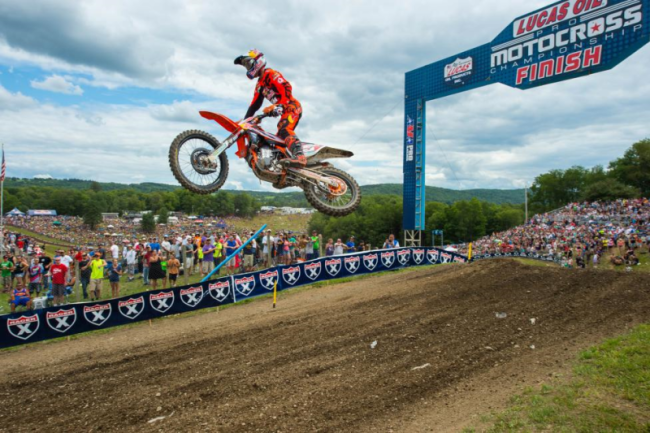 MORGANTOWN, W. Va. (August 11, 2015) – The 2015 Lucas Oil Pro Motocross Championship, sanctioned by AMA Pro Racing, will reach a critical juncture this Saturday, August 15, as it heads west one last time for the penultimate round of the season. Utah’s Miller Motorsports Park, located just outside Salt Lake City in Tooele, is positioned to serve as the site of two of the most significant moments of the entire championship as both the 450 Class and 250 Class title fights approach their conclusion at this weekend’s Zions Bank Utah National.

In the 450 Class, Red Bull KTM’s Ryan Dungey is poised to clinch his third title in six seasons following a near-perfect afternoon at Unadilla this past weekend. Dungey enters Utah with a comfortable 79-point lead in the championship standings, and needs to finish Saturday afternoon’s action with at least a 50-point cushion in order to wrap up the title one round early. As a result, Dungey has 29 points to spare barring any unforeseen misfortune or hard luck. Given his finishing average of 2.2 through 20 motos this season, the odds are heavily in Dungey’s favor to stand atop the podium with the number one plate and the Edison Dye Cup this weekend.

Dungey is in the midst of yet another statistically dominant campaign in Lucas Oil Pro Motocross, but is doing so against his stiffest competition to date. The exceptionally consistent rider has finished first or second in 18 of 20 motos this season, with his two worst efforts of sixth and 12th coming as a result of rare bouts of adversity. In his previous championship-winning seasons of 2010 and 2012, Dungey was in a class of his own, winning 10 overalls twice and at least 18 motos. While his current totals of five overall wins and 10 moto wins isn’t quite at the level seen in the past, Dungey has arguably been even more impressive in his quest for the championship this season than he was in either of the previous two years he finished on top. A total of four riders have claimed an overall victory this season, compared to three in 2010 and just two in 2012, meaning Dungey has been forced to battle head-to-head for victory with more competitors than ever before in Eli Tomac, Justin Barcia, Ken Roczen and more. Despite the heightened pressure each time the gate drops, Dungey has still responded in the same consistent manner that has made him one of the all-time greats. His current finishing average is better than the one he amassed in 2010 and is comparable to his average from 2012 despite facing a deeper field of talent. As a result, the Edison Dye Cup is within reach on Saturday.

While Dungey continues his march towards history, Autotrader.com/Toyota/Yamaha’s Justin Barcia will focus on cementing his possession of the runner-up spot in the championship. The newly announced Team Captain for Team USA at the Motocross of Nations capped off an incredible run of consistency at Unadilla that has seen him overcome a 37-point deficit in the points to take away second place from RCH Soaring Eagle/Jimmy Johns/Suzuki Factory Racing’s Ken Roczen, the defending 450 Class Champion. Both Barcia and Roczen entered last weekend’s race tied for the position, but after a crash in the first moto left Roczen with a finish outside the top 10, it opened the door for Barcia to continue his run up the standings. Now 13 points sit between these two riders with four motos remaining in what has become the most captivating battle in the championship.

In two years of competition at Miller Motorsport Park (MMP), none of the top three in the championship have stood atop the podium nor have they won a single moto at the facility. Each of the victorious outings in Utah have come via 1-1 moto sweeps, by Ryan Villopoto in 2013 and Team Honda HRC’s Trey Canard last season, for his first career 450 Class win. Canard made his anticipated return to the podium last weekend in just his second start since returning from injury, so a repeat performance at MMP isn’t out of the question. However, he’ll have his work cut out for him against Dungey, Barcia and Roczen as each is motivated for continued success in the closing stages of the season.

Jeremy Martin only has a two point lead over Marvin Musquin. Pic: Cudby

Just as the 250 Class appeared as though it couldn’t get even more dramatic, the championship battle for the Gary Jones Cup tightened even more following last weekend’s race at Unadilla. As has been the trend for much of the 2015 season, both Yamalube/Star Racing Yamaha’s Jeremy Martin and Red Bull KTM’s Marvin Musquin were in contention for victory, but did not battle one another en route to their podium finishes. Moreover, the lead duo traded moto wins but were also forced to fight through their own bouts of adversity.

This narrative has defined the season-long title fight that has been dominated by Martin and Musquin. Never before in the history of the championship have two riders endured such a thrilling battle for the title without ever going head to head for victory. As they enter this weekend’s penultimate round of the championship, just two points separate this pair from one another with Martin currently holding on to the top spot. In two years of competition at MMP, the rider that emerged triumphant in the 250 Class has also won the championship. Martin enters the weekend as the defending Utah National winner in his quest for back-to-back 250 Class titles, but as we’ve seen on numerous occasions this season, this battle is far from over no matter what happens on Saturday afternoon.

While Martin and Musquin have garnered the attention for the bulk of the 2015 season, it was Joey Savatgy who stole the spotlight at Unadilla by breaking through for his first career overall win. The third-year rider gave Monster Energy/Pro Circuit/Kawasaki its first taste of victory this season, and its first win since July of 2014 in the Lucas Oil Pro Motocross Championship. As a result of his career day, Savatgy also moved into third in the 250 Class standings and is poised to record his best championship finish if he continues to keep the momentum rolling.