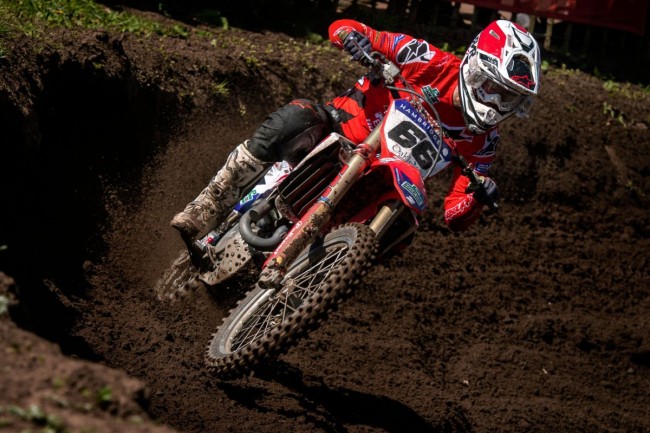 Lewis Tombs and Josh Gilbert put their Buildbase Hondas on the Pro MX1 and MX2 podiums at round two of the Michelin MX Nationals on a sweltering day at the iconic Hawkstone Park on Sunday.

The hot weather and super-tough sand circuit meant both riders were forced to dig deep in challenging conditions. The championship’s ‘Fastest 40’ format sees MX1 and MX2 classes race together – although they’re scored separately – so Josh also had to contend with a full line-up of 450 machines on his CRF250R.

After qualifying in fifth, Lewis’ 4-3 card earned him third overall on his CRF450R following the two 25-minute plus two lap motos but he would have finished one step higher on the podium if he hadn’t lost second place in race two on the final lap.

“It’s been good but it was hot and the track was gnarly so it was quite a difficult day,” said Lewis. “In the first race I struggled a bit – I had quite bad arm-pump and was just riding tense and didn’t really get into it but I managed to hold off Nathan [Watson] towards the end.

“In the second moto I didn’t get such a great start in around seventh and managed to work my way into second but Mel [Pocock] passed me on the last lap which was a shame because otherwise I would have been second overall but I’m happy with a podium.”

The defending champion, Josh was second in qualifying and led the MX2 field in the closing laps of both motos but each time crashed and had to settle for a 2-2 score and second overall.

“I’m a little bit disappointed really,” said Josh. “I kinda handed it to Martin [Barr] in both motos. In the first race I got a reasonable start, picked off the 450 riders ahead of me and was just about to get into second but lost the front wheel which was game over. Martin went past and by the time I got up he was a good 15 seconds in front.

“It was frustrating because there were only about five minutes left and I felt I had it in the bag – I knew where Martin was quick and where he wasn’t so I had it sussed.

“In the second moto I didn’t get as good a start but it still wasn’t too bad. I was sat behind Martin, not pushing too hard and feeling really comfortable. I was biding my time and planning to go for it at the end but he made a mistake and I passed him with about seven minutes to go and then almost straight away I went round a turn, tried to double a couple of bumps, lost the back end and high-sided. By the time I got up Martin was long gone.”

The team’s guest rider – Japanese teenager Shiaru Honda – was racing in the MXY2 250 class and towards the end of his first race on Saturday he was looking good for a solid score when he was pushed over a berm, crashed and injured his hand.

After sitting out the second moto he bravely attempted to race on Sunday but was in too much pain to compete.

“Josh crashed out of the MX2 lead in both races which was a real shame,” said team spokesman Ryan Thorpe, “especially in the second race when he’d just passed Martin for the lead and then went down probably around 200 metres later.

“Lewis is still learning the 450 but he was strong again and to get both riders on the podium is great so all-in-all it was a really good day for the team.”