Disappointment for 114 Motorsport Honda in Italy 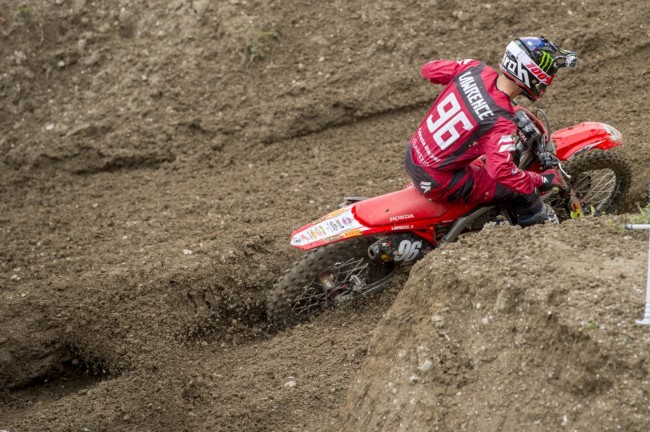 PR- Really Hard week end for the Honda 114 Motorsports crew this week end in the beautiful landscape of Pietramurata.

Time Practice is were we lost the week end, Hunter Lawrence had a really big crash, and Bas Vaessen never found a good lap which will give him a bad gate pick for the rest of the week end.

After a small crash and an hard-fought 13th in race one, Bas Vaessen was riding inside the top 10 in 2nd race when he was landed on by another rider, six laps from the end. Thankfully, despite the nature of the incident, Bas was able to pick himself up and ride back to the pits before withdrawing from the race completely. Initial reports suggest that he is badly beaten up but relatively okay given the seriousness of the accident.

Hunter Lawrence had a really disappointing weekend, as the MX2 title contender was forced to pull-out from proceedings after Saturday’s qualification race. While initial scans didn’t show too much damage, it was only after he had to stop riding in the qualifier with too much pain, that the new scans then showed that he had broken his middle metacarpal in his right hand. Obviously that means he’ll be missing Portugal but he is hopeful of a return for the Russian MXGP on May 1st.

Livia Lancelot : “Honestly i would like to forget this week end and focus on the next one, it didn’t start well in Time practice already. Hunter wasn’t able to focus on himself, he wasn’t riding how he should be. The consequences are big as he broke his hand. I’m really disappointed for him and i wish him to come back as soon as possible on the level he was during the pre season Races.

Bas keeps improving, even if the results doesn’t show it. He has to work on his Time practice but the speed during the races is getting better. Without his small mistake in first moto he could finish around the top 10. And in second he was really lucky to walk away from this accident. He was fighting with Olsen when they both went down, unfortunately it was after a jump and several riders jumped on him and the bike. I’m happy that he has nothing serious because this could have been dramatic. Now let’s focus on Portugal for him, and on recovering for Hunter.”

Bas Vaessen : “My feeling Saturday in the practices was very bad, I rode like chicken. I have the start despite my really bad position on the gate for the Qualy race, and i felt a bit better. Sunday I felt quite good actually, my speed was there, just a little over excited in one corner and caught wheelspin, with this crash i finished 13th. In second Moto, i was going for top ten but got together in the air with Olsen and then caught some tires in my ribs and dnf “

Hard to swallow this weekends results of not being able to race due to a crash in time practice . Got an X-ray done and thought it was just muscle damage as everything looked ok we tried to ride quali race but after 5 laps of not being able to hold on and just circulating we pulled in to try and save myself for Sunday’s races but went and got it checked out more and found out i have a broken metacarpal in my right hand . So now focus on recovery to get back to what I love doing as soon as I can . Sorry to everyone i let down, thankyou to my family and friends for all your support, big thankyou to the team and my mechanic! and all my great sponsors and thanks to my badass girlfriend for playing nurse and helping out a tonne this weekend. #i’llbeback💪🏽