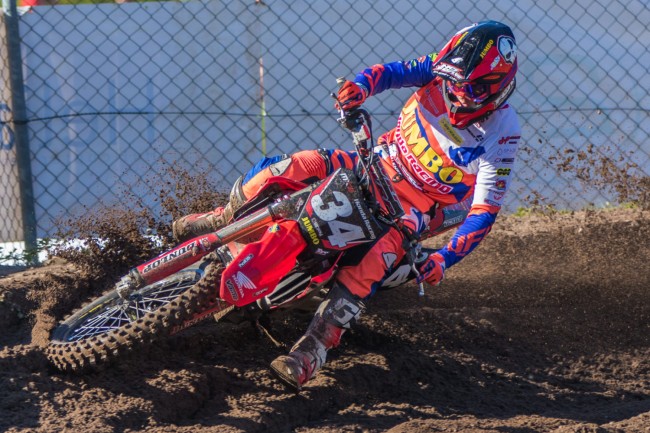 Since the Jumbo No Fear Vamo Honda team didn’t compete in the Russian GP the third round of the Dutch Masters of Motocross in Mill provided the perfect buildup to MX2 World championship racing this weeekend. Impressing with his speed all day long Micha-Boy De Waal climbed up to 10th in standings. Marshal Welting is 11th in provisional standings.

Liberated from any physical woes Mill marked a return to form for Micha. De Waal got off to a flying start of his day in time practice. He held the provisional pole a long time before placing third in the end. For team mate Marshal Weltin the race at the rough former GP track was all about getting back into the swing of things after two weeks away from the bike due to a nagging hand injury.

In spite of a weak start Micha-Boy De Waal managed an impressive comeback. Only 22nd in the opening stages the Jumbo No Fear Vamo Honda rider remounted to sixth in what was a strong field indeed. Posting the third fastest lap time of the race De Waal proved that his morning performance hadn’t been a fluke. Weltin suffered a less than optimal start too. Although he swiftly progressed to 14th the likable American was handicapped by the lack of bike time lately. Setting into a solid pace Marshal came home 14th less than 10 seconds behind 12th placed Roan Van de Moosdijk.

In the second heat Micha produced a much better getaway. He was lying seventh with the number six Cyril Genot firmly in his sights. Unfortunately he suffered some mechanical issues and was forced to retire. Lady luck left De Waal’s team mate as well. Marshal’s goggles were hit hard by a stone damaging them and ripping loose the rolloff system. The former AMA amateur runner-up did what he could but his vision was severely limited due to his goggle issues. As a result Weltin even crashed in the waves, luckily without any harm.

Micha-Boy De Waal, 12th: “Quite a day in Mill! The feeling on the bike has been great all along and I kept it on two wheels. I got off to an excellent start of my day in time practice. I pushed hard in the first moto and was able to remount to sixth after a bad start. It’s a pity we had a problem in the second moto but I feel good for Kegums. Practice has been going well so I’m looking forward to the Latvian GP!”

Marshal Weltin, 20th: “Mill is one of those typical Dutch sand tracks and on this occasion it was pretty brutal with lots of bumps. So that’s still quite a challenge for me. The heat made it a very physical race as well. I was able to regain ground gradually in the first moto but I felt I hit my treshold when I had made it to 14th. In the second race I was unlucky when I got hit by a rock in the first lap! It was very difficult to see properly because the whole left side of the goggle had been shattered. For a number of laps the rolloff was almost suffocating me as it had gotten into my moto. Once I’d got into the flow the speed was actually quite good but I feel I must continue to work on my intensity.”