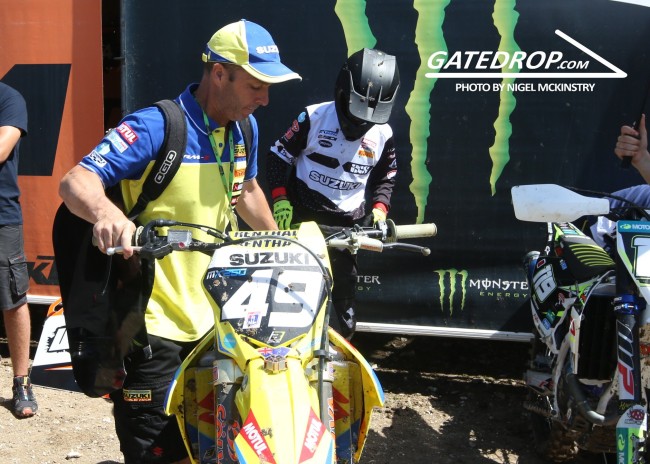 Knowing the Lawrence family from the time they spent in the GP paddock, you couldn’t meet a friendlier family as they’re always happy to talk and you can see how passionate they are about racing.

Before both Jett and Hunter both came to Europe to race, the family made the decision to sell everything they had and do it properly. The whole family left Australia to focus on both their son’s Motocross careers.

If we fast forward a few season’s everything has been going well. Hunter has had success in the GP’s and did enough to secure a ride with Geico Honda in the AMA paddock with Jett following him.

“The Supercross prep has been really good, with getting Johnny O’Mara into work with us, it has been excellent”, Darren told GateDrop.com.

For Jett’s AMA Supercross debut he was battling the flu which made it difficult for him but he still managed a top ten result on his debut finishing in ninth. Feeling much better for round two, Jett really showed what he could do with a good start – he was on for the podium before a mistake cost him.

“The first round was survival for Jett with food poisoning coming in around 1:00am Friday morning, he started throwing up and had diarrhoea for about 6 hours. That tapered down because there was nothing left in his stomach anymore, every time we tried to put food in his stomach he cramped up so we where on survival mode first round”.

“The second round was a lot better and we were ready to go. Qualifying went not too bad with getting 5th but the heat race was terrible, he didn’t hit any of his marks and crashed with another rider that used all of the track whether he meant to or not.  The main was more of what we are used to seeing from Jett as far as riding goes, he just got too close to the tuff blocks and bent his rear brake around the foot peg so every time he stood on the peg he was hitting his brake”, said Lawrence.

Being a Supercross rookie isn’t easy but Jett has took to it like a duck to water and his Dad isn’t even surprised to see him running up front so soon and is pretty relaxed when watching him because he has everything under control.

“No, I’m not surprised at all, we see that speed every time we train but it’s going to be a learning curve to transfer that speed to a new track each weekend. To watch Jett race like that is so enjoyable, he looks good and smooth so you can relax and just enjoy the show”.

If Jett can iron out the mistakes and keep learning then the podium should come sooner rather than later and Darren wants a race win.

“For the rest of the season, if we just keep on refining the little mistakes I think if we are not in the top 5 we have failed at some point of the day. We will try our best to pull a race win at some point”, Lawrence concluded.