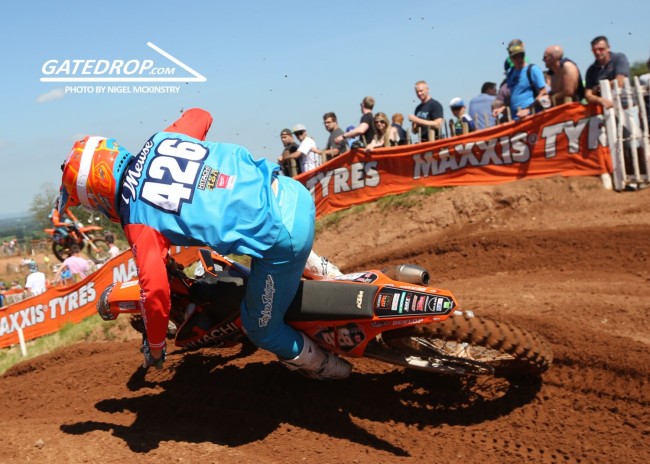 Conrad Mewse put in one of the most impressive performance I have ever seen at a British championship round at Desertmartin.

This was Mewse at his best, riding with flow and throwing the bike sideways over the jumps, the Hitachi ASA KTM rider was in a league of his own in MX2 and showed elite GP speed all day. He certainly seemed to gain a few thousand new Irish fans at Desertmartin.

Mewse showed just why he is not just one of Britain’s brightest talents but one of the world’s top young motocross stars with that performance. And, after a tough few weeks due to personal problems, Mewse is clearly back on form and says he feels mentally stronger than before.

We caught up with a happy and relaxed Mewse at the end of the day and discovered he is coming in with a calm and positive attitude for the rest of the season.

You made that look pretty easy, you just dominated everyone today!

It was a fantastic day for me. The last couple of months haven’t gone to plan but the last week or so we have been back on track and working hard and pretty much a new man. I’m a completely different person on bike, I’m just having fun, I didn’t look once to see where anyone else was today I was just literally riding my own race, having fun out there and playing with the bumps.

To be honest it’s so nice to come and ride a rough sand track, it was so nice, I just had fun riding from start to finish and it was great and it turned out I won by quite a long way in both motos, so overall it was a good weekend and we are going to keep on improving from here.

You were flowing well on the track and doing some big whips off the jumps even in the races, it looked like, as you say, you were just having a great time out there!

Yeah, I wasn’t being serious, I was just having so much fun, like you said, throwing whips and loving life. Hopefully we can keep this form in the GPs as well and we will be on a roll then.

You mentioned personal reason over the last few weeks and obviously you want to keep that private, but does it feel good to have turned your form around again back to how you were at the start of the year?

Definitely, it was nice to turn it around. It affected me quite badly as you could see (in the results) but we are back on track now and it’s good to overcome that mentally. We have a lot of confidence, I have been through quite a lot, more tough times than probably anyone else has, it’s been tough for me and people have achieved things before me, mine hasn’t come so quick. Some people have achieved podiums in GPs before I have but it just makes it that more special when I do eventually get there.

You proved you could get the results when you got the starts in GPs but recently you have been coming through the field to get results too, is it good to be able to do it that way too?

Yeah I’m coming through the pack, now all I need is that good start and hopefully I can run at the front. But the speed is there at the last few GPs so we are just going to keep working hard and doing our thing and hopefully we are going to eventually get there.

Mewse on the pegs a he storms to a double win at Desertmartin. Pic: Jonathan McCready

Is a GP podium the goal for the rest of the season?

Well, I’m just taking it race by race. I’m not looking at the championship, I’m just having fun race by race, if I land on the podium great, if I don’t then I don’t and move onto the next one.