Coldenhoff and Vialle win in Sweden! 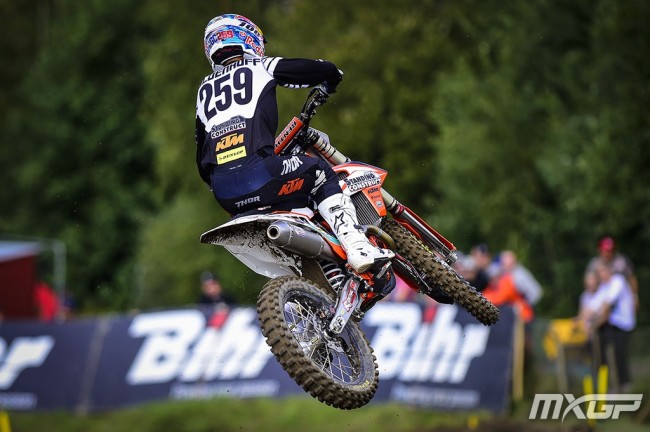 Glenn Coldenhoff won his second Grand Prix in a row after a dramatic day of racing in Sweden.

Jeffrey Herlings led race one for over 20 minutes but arm pump meant he was struggling to hold on after only a week back on the bike as Coldenhoff eventually found his way past followed by Febvre and Gajser.

Herlings then went down holding off Tonus but the Swiss man hit Herlings’ bike and also hit the deck! Herlings pulled in with a bike issue as Coldenhoff took the race win from Febvre and Gajser.

Race two and it was Febvre with the lead and Gajser in second with Coldenhoff and Herlings at the back end of the top ten.

Coldenhoff moved through into the top five but the battle was on between Gajser and Febvre for the overall with Gajser eventually making his move with a few minutes to go.

Gajser looked set to win the overall until Febvre went down hard out of second place and unfortunately had to be stretchered off. That got Coldenhoff up to fourth but he still needed to pass Jonass for the overall and after a couple of attempts, Coldenhoff moved Jonass out of the main line to take second in the moto, and crucially, the overall win in win in an intense final couple of laps.

“The last lap pass was kind of crazy and quite aggressive but it was for the win,” said Coldenhoff on his GP winning pass.

Jeffrey Herlings battled from the back of the top ten through to fourth to get a full 30 minute plus 2 lap race under his belt and even started setting some of his best laps at the end of the race and he started to get his race rhythm.

Tom Vialle took his first ever Grand Prix win as Jorge Prado took his second world title in a perfect day in Sweden for Red Bull KTM in MX2.

Prado won race one ahead of Vialle to clinch the title but didn’t holeshot race two and then crashed while in fourth to give Vialle the chance of victory.

Vialle looked set to go 2-1 until a crash let Calvin Vlaanderen, who was keeping the pressure on the Frenchman, through to take the lead and eventually the moto win as Vialle settled for second and the overall win.

Prado, who couldn’t use his clutch after the crash, ended up fourth almost getting a rapid Sterry for third in the moto after posting his fastest lap on the last lap in late bid to take his record equalling 14th overall win in a row.