Coldenhoff: A bummer to get passed on the last lap 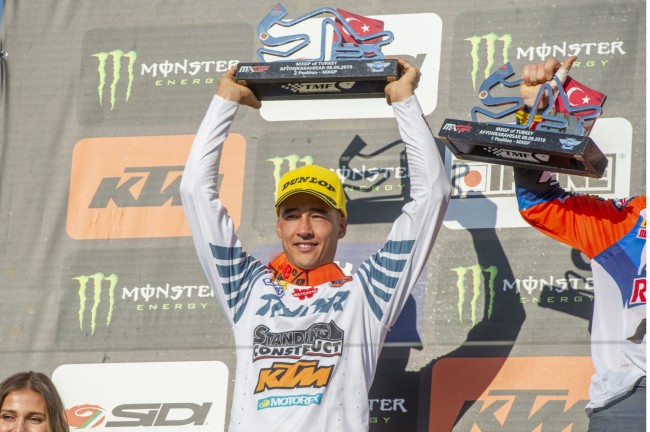 “It was a great weekend for me, “he said. “I was competitive with lap times all weekend long, I had a good start in the qualifying heat, and was slotted in just behind Tim Gajser. When he crashed, I took over the lead and held that for the rest of the race. Jeffrey pushed hard in the end, but I managed to keep him behind me. I’ve finished second in qualifiers a few times, but this was my opportunity to take a win.”

With a good gate pick, Glenn had confidence going into Sunday’s races. Despite a less than ideal start in race one, he squared off the first corners and managed to shoot into second position. “Jeffrey Herlings came by, and I clamped onto Pauls Jonass. I tried to pass, but just could not get close enough to launch an attack. I eventually decided to not risk crashing, and finished third.”

A similar manoeuvre in the second heat got Glenn into the early race lead. Despite huge pressure from Herlings, he prevailed for most of the race, keeping the multiple world champion behind him. Herlings had the speed advantage on a particular section of the track and used this in the last lap to pass Glenn and snatch victory away.

“It’s a bit of a bummer to get passed at the very end of the race for the victory,”he said. “Every point is very valuable for the championship chase as well, because I’m only 11 points behind Gautier Paulin for third in the standings right now. If it goes well in China, I can possibly still clinch third spot. It won’t be easy, though, because Paulin will also be going for it. We leave for China on Wednesday already, so we have a short week to prepare.”